Interview with Ryosuke Cohen from the National Art Center in Tokyo, Japan. 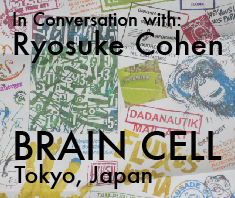 Ryosuke Cohen is not a Japanese Jew. He was introduced to Mail Art by prankster Byron Black (originally from Fort Worth, Texas, an ESL teacher and world traveler), who when asked to translate Ryosuke’s family name, should have replied Koan – but didn’t. A source of confusion perhaps, nevertheless, the Ryosuke Cohen appellation stuck. Ryosuke was not the first Japanese Mail Artist, but he is the longest running Japanese contributor to the international network, who has based his participation on his long running Brain Cell project, which gathers images from Mail Artists on a single page accompanied by an address list of contributors from some fifteen countries per unit. Doing so, he is perhaps more responsible for the spread of Mail Art than anyone else in the Network. I began writing to Ryosuke shortly after he became active in Mail Art, and have remained in contact with him for thirty years. Over this time, we have met on several occasions, both in the Untied States and Japan. Our most recent meeting was in Tokyo to view the exhibition, “Gutai: Spirit of an Era,” at the National Art Center. I took the opportunity to question him about his involvement in Mail Art.

Can you tell me when you began doing Mail Art?

How did you hear about it?

Byron Black, a Mail Artist from Canada [who had lived previously at Western Front, Vancouver, Canada]. He showed me Mail Art at AU group meeting. Shozo [Shimamoto] and I first found out about Mail Art at this time.

When year did AU [Artist Union or Art Unidentified] begin?

It was started by Shozo Shimamoto in his old house. The house where Gutai magazine was first printed.

Who were some of the first people you corresponded with?

Was there anyone else doing Mail Art in Japan at this time?

When did you start gocco printing that you use in your work.

First I did silkscreen. Then I printed with gocco in 1983.

You started on postcards?

Yes. First on postcards and then on Brain Cell papers.

What gave you the idea?

How often do the Brain Cell issues get distributed?

One issue every ten days. So, three in one month.

First I do a photocopy. For gocco printing, you need black and white contrast. Next, I cut the photocopies and put them together.

You make a collage of the black and white images on one page. How many copies do you print?

Then they are sent out to the correspondents that have contributed images, accompanied by the names and addresses of the people who are included in that unit. There are extra copies that are not distributed. What happens with these?

There are fifty people in one issue of Brain Cell, and I make 150 copies. Fifty copies are sent to Mail Artists. I keep 40 issues, and the others are made into books containing 25 issues of Brain Cell.

Are these books sent to artists or to institutions?

They are sent to Mail Artists.

Not to museums or libraries?

Sometimes I get requests from libraries and universities.

Mostly abroad. I can’t remember who.

Many Mail Artists have arranged Brain Cell exhibitions? Where are some of these places?

There are probably two or three countries a year. For example, last year they were shown in Holland and Ukraine.

It was arranged by the Mail Artist Ever Arts.

Did you send him the books and he would break them up to exhibit?

You do this all by yourself, without any help? I know you were a teacher (Ryosuke recently retired). Did the students help you?

You have the gocco machine at your home?

You will continue to do the Brain Cells?

When you receive the work from Mail Artists, what do you do with the correspondence you receive?

I rent space to store the works.

How big is the collection?

Many paper boxes. One year maybe three or four paper boxes, so after thirty years…about ninety or hundred.

What do people send you? Just images for Brain Cell, or magazines, catalogs, the things most Mail Artists receive?

It’s a big collection. What to you plan to do with it.

If possible, I’d like to place them in a library.

Do you have a specific library in mind?

Has anyone asked you about the collection? What about the Hyogo Prefecture Museum [which has a Gutai collection]?

Do you see Mail Art as a continuation of Gutai.

I learned Mail Art from Byron Black, so I don’t see Gutai and Mail Art as connected.

I remember, in the beginning, you used to send every Brain Cell to German Mail Art Klaus Groh? Any others who received many of the Brain Cells?

Do you think Mail Art is more popular now or before the Internet.

Since I’ve been on Facebook, many people write me. But I think it’s a different kind of communication.

What is the difference?

When did you start doing the silhouette project? [Brain Cell sheets are joined together in rolls upon which subjects lie, while Ryosuke draws around them.]

Who were the first people?

Emilio Morandi. Then I went to the United States, Canada, England, North Ireland, Spain, Yugoslavia, Germany, Holland and Korea. Two years ago, I got cancer, [so I have not traveled much]. Next year I’ll continue the project.

Sometimes you silhouette the whole body, and sometimes just the head.

I do both the body and the face.

When you complete the silhouette, you give them to the people whose portrait you’ve done?

You don’t save any for yourself, or do you?

It would make an excellent exhibition…

…but difficult to gather all the materials.