Kristen Texeira, "Spider string on the tops of small pines move in the wind like sails of ghost ships", 2012.

24k Studios opens tomorrow night in the Mission with the exhibition “Unstuck in Time,” paintings and collage by Kristin Texeira. Texeira’s paintings resemble the Bay Area Figurative Movement and call to mind the dyslexic experience of synesthesia with verbose titles. The titles are almost as lovely as the paintings. Often titles over four words long call to mind the band …and You Will Know Us By the Trail of Dead or Dave Egger’s “A Heartbreaking Work of Staggering Genius,” and the hyperbolic pretention characteristic to made-up names in the late 1990’s to 2000, but Texeira’s are enlightening and descriptive. Context on intimate and specific subjects makes her semi-abstract paintings seem all the more thoughtful.

From 24k Studio’s press release for “Unstuck in Time”:

This current body of work addresses moments in time that the artist wishes to remember and share with others through color. Writing plays a significant role both in the imagining and manifestation of these works of oil on paper. “Writing proves to be this underdrawing, a blueprint to let me mix a color,” says the artist. This collection is quiet and poetic, visually striking and psychologically loaded. We thank Bret Woodard who, acting as curator, has presented 24k Studios with Kristen’s concise body of dense, yet playful work.

This exhibition will be the first event held at 24k Studios. Located in the Mission District of San Francisco, 24k is a studio space with sculpture and metalworking facilities as well as a venue for art exhibitions, film screenings and creative exchange. Co-Founders Brooke Valentine, Elizabeth Woll and Lidija Ristic are all graduates of the Massachusetts College of Art and Design in Boston and work within the arts communities of San Francisco and Oakland. They create their own work year-round in the studio and invite friends and fellow artists to participate through exhibitions and collaborations. 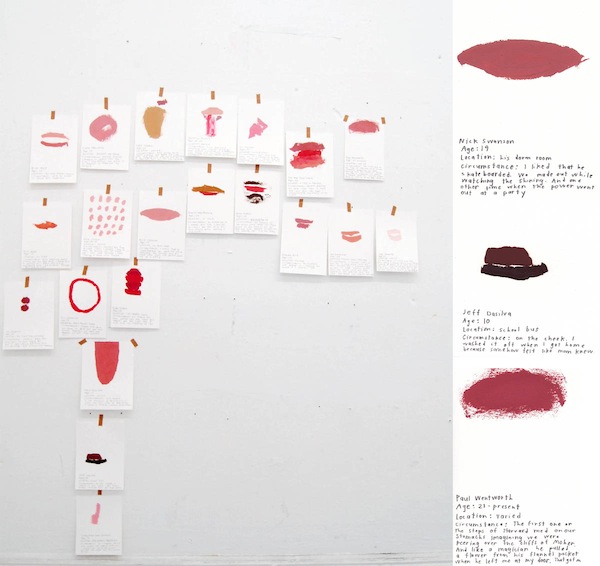 Kristen Texeira, "All of the boys i've ever kissed arranged by their height at the time, and my age at the time", 2012.

Kristin Texeira, "Sunset through the curtains while the poet read about the river", 2012.

Kristin Texeira, "Holding onto magic hour and proof that the light lasts until 1030 PM", 2012.

Kristen Texeira, from the series "Aliens and Tarot Cards", 2012.