Videos with an Arty Flavor

Painting with the Muse in "Noel Fielding's Luxury Comedy" episode The Jelly Fox.

Video art can be wonderful, but it can also be exhausting. Good video art requires a lot of attention and thought—for which you are rewarded! Bad video art tries to trick you into not hating it by using slow motion, repetition, and banality to pray on your short attention span or fear of appearing unintelligent. After effort and pretension, uncomfortable family time on Thanksgiving, or finding out your stoner ex-boyfriend of five years had a baby immediately following your break-up, a palette cleansing is in order. I like to check out and refresh my brain by watching non-committally short videos online with an arty flavor. These are some of my favorites:

If smoking weed made me feel silly, rather than want to clean the baseboards, “Noel Fielding’s Luxury Comedy” would be my favorite show. (This probably sheds some light on why the stoner baby daddy and I didn’t work out.) “Luxury Comedy” is a surreal, bizarre, stream of consciousness series of skits, yet it’s still more cohesive than a lot of “The Mighty Boosh.” The art direction is Pop-y and exceptional for a TV show (on Britain’s E4). There’s a lot of fun to be had in seeing art historical references, even if they are common (Haring, Dalí, Basquiat), in something mainstream. Noel Fielding’s butler is Andy Warhol, played as robotic and charmless as the original seemed to be. Catch up now, a second season should be coming out soon.

PBS’ Art 21 is the Old Grey Mare of online art videos. Many of my favorite artists are unlikeable on film: they are pretentious, annoyingly slow talkers, their explanations of their work are so bush-league that it undermines my appreciation for their work—looking at you Walton Ford. I wish I could un-see a lot of these videos. I will watch two episodes over, and over again, because the artists have that Stage Presence Sparkle that makes for good TV: Mike Kelley and Jeff Koons. The late, great Mike Kelley made art that I love and had a wonderful energy that every artist who thinks being lackadaisical is cool should take note of. Kelley analyzes his own art eloquently, with one of the best ‘tudes that ever played the game. Koonsie is just delightfully kray (it’s in the eyes), and it’s fun to watch his studio monkeys at work.

The Museum of Contemporary Art, Los Angeles launched MOCAtv on YouTube last month, and its direction is still unclear. Many of MOCAtv’s show bite Art 21’s style, but without it’s swoopy production; I imagine Jeffrey Deitch wanted a stage for the artists MOCA exhibits without the non-profit (poor) taint of PBS. Thus far, the best shows are “Techno Mystic” and the series “Feast of Burden.” Someone needed to make “Techno Mystic” eventually, which according to MOCAtv “uses YouTube as a spirit medium, bringing together seven artist-made films and videos that explore the incongruous co-existence of mysterious phenomena and modern technologies.” Its videos are some of the best examples of the New Aesthetic on the Series of Tubes. Eugene Kotlyarenko’s “Feast of Burden” is a kinda-remake of Luis Bunuel’s “Exterminating Angel,” only this time the dinner party guests are in club kid/sea punk/hipster-ware. The series has good jokes, but none as funny as watching the actors act. The series will conclude on Monday, November 26.

Post-Gavin McInnes “Vice” has a lot of faults, but its videos are not one of them. The series “Art Talk” is nearly always #relevant. This episode on Justin Lowe and Jonah Freeman is an argument against photographs of environmental installations and for video walkthroughs of them. Galleries, I promise we’ll still go see them in person. I learned that Justin Lowe is Rob Lowe’s brother by reading Cat Marnell. Whatever, don’t judge. You need to balance highbrow with lowbrow for perspective; I learned a long time ago that there’s enough room for Alexander Jodorowsky and “Clueless.” 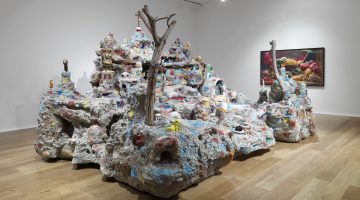