The Society for the Encouragement of Contemporary Art (SECA) Art Award winners were announced yesterday by the San Francisco Museum of Modern Art (SFMOMA), who coordinates local judges and shows the winners’ work. SFMOMA will close for expansion in the summer of 2013, obviating the annual winter SECA exhibit. SFMOMA and the SECA panel made the absolute best of an usual situation, and this year’s winners largely work outdoor and make installations.

David Wilson makes line drawings of trees and maps. As Ribbons, Wilson makes day and weekend long Gatherings with directions and invitations using the aforementioned line drawings to build forts, make music, camp, dance, eat, make outdoor art, and provide guests with experiential activities. “Memorial Fort’s” (2009) tangly whip of branches is a stage for performers that looks strong enough to last; just as land art that’s quickly reabsorbed is beautiful, sometimes it’s nice to think it’s still standing in Richmond three years later. “Ukiah Retreat” (2010) was seemingly all about camping in the grass and making sculptures for the land as a group. Wilson and his friends photograph and film the gatherings beautifully; the documenters seem to use vintage equipment for vintage colors, which, instead of Instagram tweeness, looks like genuinely warm people having a generative experience in the 1970s.
Wilson/ Ribbons’ SECA contribution may resemble the Berkeley Art Museum gathering, which filled the large ground floor, with participants seated on the floor and a reclaimed wood backdrop for a sun ceremony. I hope the gathering is larger, longer and in the woods, which would be a truly special experience. Wilson is the only winner creating emotionally resonant and community-oriented art, and is the standout star of the bunch.

Zarouhie Abdalian’s work is minimally aesthetically pleasing, but is given undue reverence because she didn’t elaborate, think cracks in a concrete floor “Island Rill, Rift” (2009). She has an eye for the subtle, everyday visual gifts around us that are often ignored, but better-than-average observation is one of the primary requirements of being an artist. SFMOMA’s press release notes how,

Her refined modifications transform a viewer’s physical or emotional resonance of space. Abdalian explains, “A successful work might act a bit like a speed bump: It may not change your path, but it registers, and for a moment, you move differently.

It may be her art is better experienced than seen in photos. “Away Setting” (2012), an installation in Shanghai of a bank of closed rooms with windows that were alternately illuminated with a thousand iterations over three months are warm and sentient depiction of the passage of time. However, the photo set “Now Showing” (2012) of a particularly gnarly intersection on San Francisco’s Mission Street, where dissociated homeless sleep and pee on the sidewalk and Yoga to the People holds classes, is almost devoid of people. Not showing the reality of the site of “Now Showing” is weird, and if subtlety is Abdalian’s aim, the series’ meaning is only accessible to people in their mid-twenties who don’t want to pay too much for yoga.

Site-specific installations are Abdalian’s greatest strength.  Frosted windows with drawings in graphite in “Set for the Outside” (2010), a comment on the abandoned Greyhound station next to the California College of the Arts, is cheeky and subtle in a funny way—as opposed to subtlety accessible only to a small demographic. Hopefully, wherever in the Bay Area her SECA exhibition lands, she’ll address the site with the same honesty and humor.

Josh Faught, “How to Make Somethings From Nothings”, 2012. Jacquard woven reproduction from the AIDS quilt, laminated legal advertisement, cotton, glittered clothespin, cochineal (made from ground up bugs), indigo, and handwoven hemp on linen, 78.5 x 51.5 in.

Josh Faught makes beautiful patchwork wall hangings of sewn together self-dyed knits and woven pieces and object assemblages. The majority of his woven work address gender politics and queer issues, which is like preaching to the choir in the Bay Area—so you’re gay, no one cares—but is still a necessity in heterosexual-dominated contemporary art. His knits resemble anemones and his textiles reference culture (ikat came from Central and South America, the Shroud of Turin has a herringbone weave), together they attest to a wide range of Faught’s knowledge and skill.
Faught has a knack for design and obvious hand skills, and his work is delightful to look at even if it didn’t have a thesis. I hope his off-site installation is similar to a grand yarn bombing, but with organic shapes and a literate message.

Jonn Herschend, "Self Portrait as a PowerPoint Proposal for an Amusement Park Ride" installation, 2010.

Jonn Herschend is described as:

an interdisciplinary artist and filmmaker who investigates emotional truth, confusion, and absurdity in everyday life. His videos, installations, and performances humorously question how we interpret the validity of information by utilizing the formats of corporate messaging such as PowerPoint presentations, infomercials, and educational videos. A recurring theme in his work is the literary device of the unreliable narrator who turns Herschend’s site-specific fictions into personal and confused dramas that implicate the viewer in seeking to find the reality of a situation (SFMOMA).

That description promises an epistemological comedy tour through art. Exciting! Too bad this bio is playing with alternate notions of what is real. In “Why This Drawing Cannot Stand Alone” (2008-2009), an easel was set up with an apology for the absence of a drawing, which was never received or never completed, along with a PowerPoint presentation about how the drawing was made. In the film “Pastoral no. 5” (2011) a director yells “action walkers,” and three minutes later, the walking actors approach the camera and get into a fight with the director; it’s awkward, but not enough to make you cringe, and it’s not weird enough to be funny. The premise of Herschend’s films and installations is almost always “you had an expectation, it wasn’t fulfilled, but in its place is something addressing the fact that you had expectations.” I already know this is how my lizard brain works, thanks.

Herschend’s installation will probably address how pathetically predictable you are.

All images are from the linked artists’ pages. 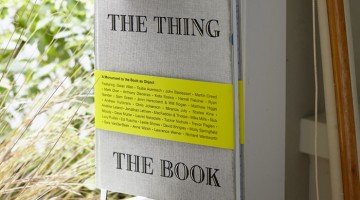 THE THING THE BOOK at THE THING Quarterly, San Francisco