"I dun a painting of the Pope ('Goodbye Pope')", by Robert Popper

You might know me.  I’m the Pope.  Or at least for another few days.  My name is actually Joseph Aloisius Ratzinger, but you can just call me Jo, or Al.  Or even Rat.

I’ve had a short 8 years being Pope, which I confess has been a pretty cool title to have.   I have my own cook, a bullet-proof Mercedes Benz and several comfortable robes I can wear even outside the house.  And people like to hear me speak Latin, which most can’t prove I’m speaking because most don’t have a clue what the hell it is I’m saying.  But greatest of all I get your respect, fear, and admiration, and I never, ever, have to wait in lines.

The "Popemobile". Original uploaded by Caiodovalle at de.wikipedia

It’s been a good run but I’m calling it quits.  Even when I was just a boy in the Hitler Youth Program (they made me go!) I admired art and high culture, dreaming of the day when I too, could join the ranks of the great artists of my time…none of whom I can recall at the moment.  So, as my clock is ticking and I’ve noticed that my anti-gay hysteria and opposition to condoms hasn’t garnered much support, I’d like to poke my stick at something new.

I was horrified to see my buddy John Paul II get slammed by a meteorite in Maurizio Cattelan’s wax sculpture.  What kind of fucked up god would strike down Johnny No. 2?  Not my J.C.  This sort of blasphemy, along with women’s rights, homos and sexual education, disgusts me, and starting next month I have chosen to pick up oil painting, inspired by the great restorer, Cecilia Gimenez, who I studied under whilst holidaying in Spain.  Her stark yet simple gestural strokes shook me like God’s redemptive love, showing an incorruptible and monkey-like beauty few have known.

I also thought maybe I should aspire to a more candid, vulnerable style of painting, like the naked-loving Karine-Percheron Daniels.  In fact, below is one she did of me while I was zoning out on an acid-trip.  Look at those nips!  I don’t know about you but I could use a little milk in my bowl.

You might be wondering if it’s reckless or shortsighted of me to leave the Papacy.  Well, that’s a good question but I haven’t given it much thought, and to be honest I don’t really care.  I’m so fucking bored of the same old shit every day.  I want to spend my remaining time on this extraordinarily violent and embattled planet sipping sacred sherry and showing the world I’m more than just a sky pilot.  Is that so wrong? 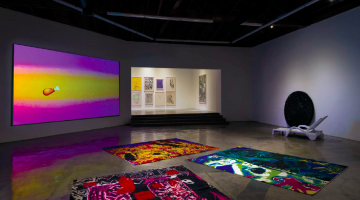