Art World in Review: L.A., Dave Hickey gets the ole’ once over from East Coast lurkers. 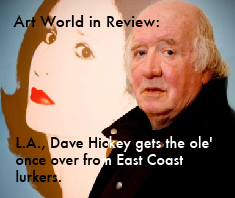 It would seem that everyone under the sun, sleet, snow, and hail is talking about Los Angeles lately. There was the Art Los Angeles Contemporary art fair, L.A. Art Book Fair, and an even weightier presence, Dave Hickey. This after the last couple of weeks saw an explosion of speculation revolving around MOCA’s appointment of Philippe Vergne as its new director, and the announcement of their 35th Anniversary Gala, which has to make up for the “grotesque spectacle” of the 2011 incarnation that still lingers in the minds of  many an Angeleno.

Los Angeles has seen a renaissance moment in recent years, but the tranquil cool of its artistic community is always being picked apart by stealthy east coast vultures (critics, the art media) whose view from afar is distant, impersonal, and prone to misunderstandings. Referring to the kerfuffle surrounding the MOCA’s new manager, Stacey Allan of L.A. based online magazine “East of Borneo” put it in a tweet:

Indeed, the media was psyched; Philippe Vergne’s new job found itself front and center on many art media sites, as well as in the arts sections of national newspapers. Why is his new job such a hot topic? Is it a genuine concern for what is considered by many to be one of the finest collections of contemporary art in the United States, or is it only that he is taking Jeffrey Deitch’s old job? Perhaps the response was a deeper reflection upon the state of affairs of American art museums and their relevance in todays world, one where museum attendance is at an all time high, but contemplation of art is at an all time low.

MOCA’s new public face is Philippe Vergne, a Frenchman of 47 from the town of Troyes. He has a long track record in museum administration going back to his appointment as director of the Musée d’Art Contemporain in Marseille in 1994, just two years after receiving his doctoral diploma from the Sorbonne. From le’ MAC he came to the United States in 97’, where he became senior curator at Minneapolis’s Walker Art Center. In 2005 he had a brief stint as director of the Pinault Foundation museum before returning to the Walker as deputy director/chief curator, and co-curated the 2006 Whitney Biennale. In 2008 he became the director of the influential but struggling DIA art foundation in New York. As the La Weekly put it, Vergne is a “museum professional”.

Deitch, then Vergne. “Out with the new, in with the old?”

Last year he brought DIA under fire from critics for selling much loved modernist works for $38.4 million at Sothebys to pay for new contemporary acquisitions for it’s Beacon, N.Y. campus. It is precisely this that has drawn skepticism concerning his new post from such critics as Lee Rosenbaum, who expressed great worry that he may “monetize important older works at MOCA to feed his appetite for the new.” Tyler Green wrote “You can bet that the museo-vultures at the New York auction houses just put Vergne on speed-dial.” Jerry Saltz, an admirer of Vergne, pointed out that, although he balanced DIA’s budget, he never truly explained why the works had to be sold. Justifying the sale of parts of DIA’s collection, Vergne infamously told the NY Times “Dia cannot be a mausoleum,” . The intention behind this statement is no doubt Vergne’s desire to keep his collections fresh and vibrant, though it’s worrisome if this attitude were to be carried over to the museum context, where care and appreciation of the lineage of contemporary and modern art makes up the fundamental plateau from which the most current of contemporary art can be considered.

The attitude of “out with the old and in with the new” works for the fashion industry, but even there it is acknowledged that a new look is always a recycled one. Alas, art is not fashion and is only understandable if one has an appreciation of it’s past.  After all, it was former director Jeffrey Deitch whose gallery-centric attitude of glitz’ & glam’ proved to be mere gimmickry. While contemporary art may be exciting, it is not always excitement that creates meaningful artwork, and it is the job of museum directors to keep art that is not of-the-moment exciting and relevant. I saw Mr. Vergne speak at SFAI In October of 2008, and I remember appreciating his relatively humble, intelligent approach to art that I had sorely missed after coming back from a semester abroad in his home country. My personal opinions towards him are favorable, reinforced by the approval of the likes of John Baldessari and Ed Ruscha. None the less, this important museum will not be in the service of the Angeleno art community and public at large if the pageantry of a gallery owner is traded for the pompousness of curatorial expertise and a fleeting obsession with the au courant. 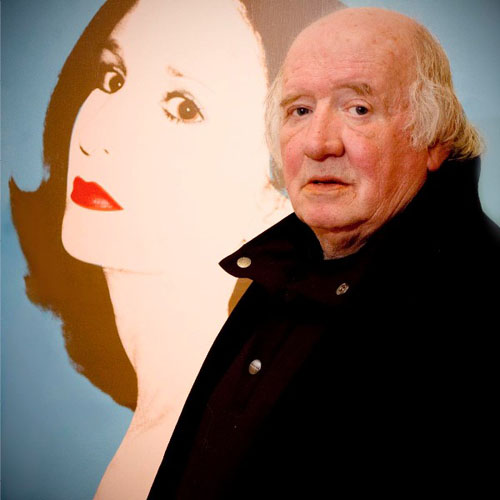 Dave Hickey with a woman behind him.

As if there wasn’t enough for art world media types to bat around MOCA, speculation ran amok concerning a Dave Hickey talk they put on last Wednesday. A skirmish of straw grasping was set off when Tyler Green ostensibly accused Dave Hickey of endorsing sexual assault , vindicating this view with an arbitrary quotation from a TUMBLR blog MOCA had used to promote the event, as well as tweets from individuals at the event. Art journalism is in trouble when a widely read blog uses TUMBLR screenshots and tweets as sources. The following Hickey quote had been ripped from its original context in the name of sensationalist promotion:

In absentia from the actual talk, Green relied on the tweets of arts writer Carolina A. Miranda, whose tweets accomplished just what tweets are supposed to accomplish: facilitate gut reaction and little context.

Tyler Green’s assessment of Hickey caught the immediate attention of New York painter Noah Becker, founder of White Hot Magazine, who dramatically penned an article calling for the removal of Green’s blog from Artinfo, before removing it upon further reflection and the advice of the likes of Jerry Saltz on Twitter. I sympathize with Becker’s gut reaction. Not with his quarrel with Green, (im sure Mr. Becker’s frustration was not with him per-se anyway), or even the article that set off the scuffle, but something else, something much more important that is not being written about.

When intelligent thinkers like Dave Hickey say outrageous things, there is almost always an important reason they do so. Unfortunately, this makes them easy targets for simplistic attacks.

The interview from “The Believer”  that the statement was excised from had much to say, and can be read in many ways.  However, the opening remarks established the parameters for how the rest of the interview would unfold and concern the same topic and subject matter this quote derived from: early experiences that install a desire for an artist to express him or herself. Hickey was asked if there is “a discrepancy between why artists tell themselves they’re making art, and the actual reason you perceive them to be making art?” In other words, what are artists unconscious motivations for doing what they do? His response:

It was his account of this “lizard brain”, (perhaps his own) that found him postulating about a theoretical event in the life of a make-believe artist. Here it is again, with its qualifying sentence intact:

“I think you want to learn about art because you had an experience of some sort—a totally nonredemptive but vaguely exciting experience, like brushing up against a girl with big boobs in the subway. It’s about that level of intensity. So you want to find out more about it since its sources are so mysterious, and these sources reside in you as well as in the object.”

It comes across as rather Freudian, and the irony not lost on me, both thinkers have plenty to be criticized for, but the attacks leveled against them for being outmoded and intolerant are way off mark. I suggest Dave Hickey is describing something similar to his own developmental urges to create art, but also that the most authentic art comes from artists who have an instinct in them to create art, in other words, art that come from meaningful encounters in an artists life, from the gut. Most definitely, the vignette he uses is most likely a projection of his own particular experience – but that was his subjective experience, and he is being brutally honest.

Today, an interview with Deborah Vankin in the LA Times gives us some food for thought on the matter. Here are some excerpts:

In particular, his own words about his childhood may help us understand the context of both what he says, and the man himself:

…closer to what he actually meant?

Though the biographical bits of Dave Hickeys life may be entertaining or even interesting to analyze, what shouldn’t be payed attention to is his life per-se, then you miss what he is actually advocating for: art and artists that are not scared to say why they make what they make. Why can we not speak openly about the drive to create?

Artists lives’ are incredibly interesting stories that lend a richness to what they make, and the subjective ways artists express themselves should not be taken for granted or written off as mere romantic narratives. I have noticed art world institutions and communities have a way of making artists uncomfortable in their own skin, and it doesn’t take long for a gallery goer to realize many artists and art world professionals speak with a language not of their own. The art school educated ask “what is the piece about” more often than “where did this piece come from?”, “why did you make it?”.

Dave Hickey is one of the few writers that I know that is appreciated by more artists than he is other art writers such as critics and curators. I believe this has to do with his defense of art as being tied to instinct, and is thus an artists writer, not a writers writer, who tend to prefer the cerebral over the visceral. I came away from Tyler Greens portrayal of Hickey with a bitter taste in my mouth, I felt like I had been attacked, and not as a fellow brash and guttural heterosexual male, but as an artist who does not share the enthusiasm for an art world that has been sanitized by institutionalization and notions of political correctness. The “identity politics” that Hickey has no time for have little to do with identity politics as such but the institutionalization of art and the idea that a politically conscious art world is more relevant than one concerned with beauty and deep thinking. Sometimes, fancy words obfuscate, or block, full speech, speech that cant be ignored- that speech comes out powerfully in visual art, you just have to listen, lend an ear to it’s beauty and depth.

Tyler Green had attacked someone who defends beauty and deep thinking with the most shallow of political posturing. I say this not to disparage or attack Mr. Green, he does an excellent job at breaking much news, but to encourage more thoughtful and investigative reporting in the arts. The art world is far too insular of a group, with way too many shared goals, for us not to take care of each other, and each others struggles. Thoughtfulness, handling matters with care, is one goal we can all strive for.

The two write ups which contain a more fair and nuanced take on what was actually said at the Hickey talk can be found here in the LA Times and over at Hyperallergic. In addition, Carolina Miranda responded thoughtfully on her own blog, “C-Monster”, to all of the various allegations made.