In Conversation with Curator, Santi Vernetti 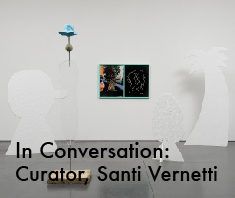 While each of these artists, as Vernetti explains, have previously been best known for their work in the digital/online world, they are all incredible painters, sculptors and most importantly, conceptually-driven emerging artists who put a definitive lid on the seemingly unnecessary term ‘post-internet art and theory.’  Questions of intellectual property, manufacturing, big corporations, serial excess and transformability all come into play in this exhibition in ways that are thought provoking yet subtle, and at times truly shocking. 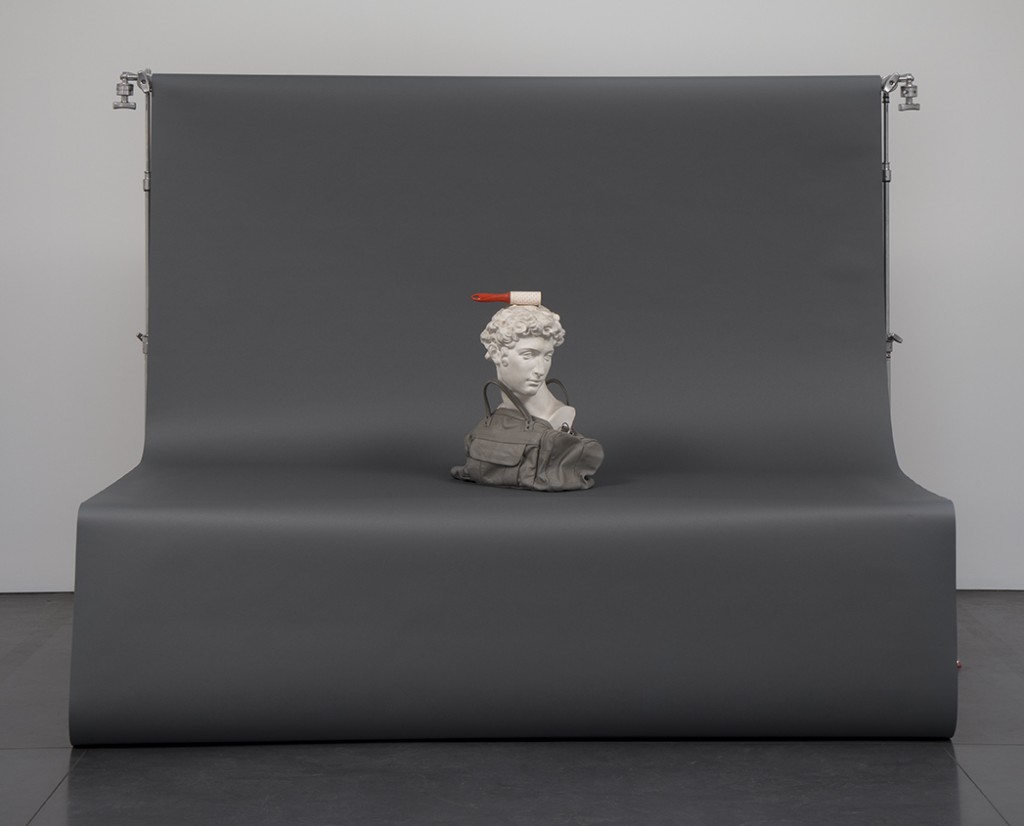 Marc Horowitz, A Hit is a Hit, 2014
Courtesy of the artist and Perry Rubenstein Gallery

Leading me through the front gallery where Marc Horowitz’s installation, “A Hit is a Hit,” (2014), sits front and center, flanked by a cluster of sculptures by Sam Davis our left and three bright, abstract paintings by Michael Manning to our right, Vernetti explains the element of interchangeability that resonates throughout much of the artists’ practices.  For Horowitz, “these objects, while specific, are also somewhat open-ended, in that, for example if a collector or museum were to buy “A Hit is a Hit,” and years later the lint roller atop David’s head went missing he has no strict guidelines that the exact same lint roller necessarily replace it.”  Similarly, Manning’s series of paintings, each responding to the tracks produced from Sheryl Crow’s Pandora station, of which there are approximately 130 altogether, are made less in the spirit of creating beautiful images and more as the representation of particular instances within a long and somewhat random set (of songs that evoke Cheryl Crow, in this case).”  Davis’ installation, which faces Manning’s paintings across the width of the gallery, also suggests a long riff on a relatively feckless theme. 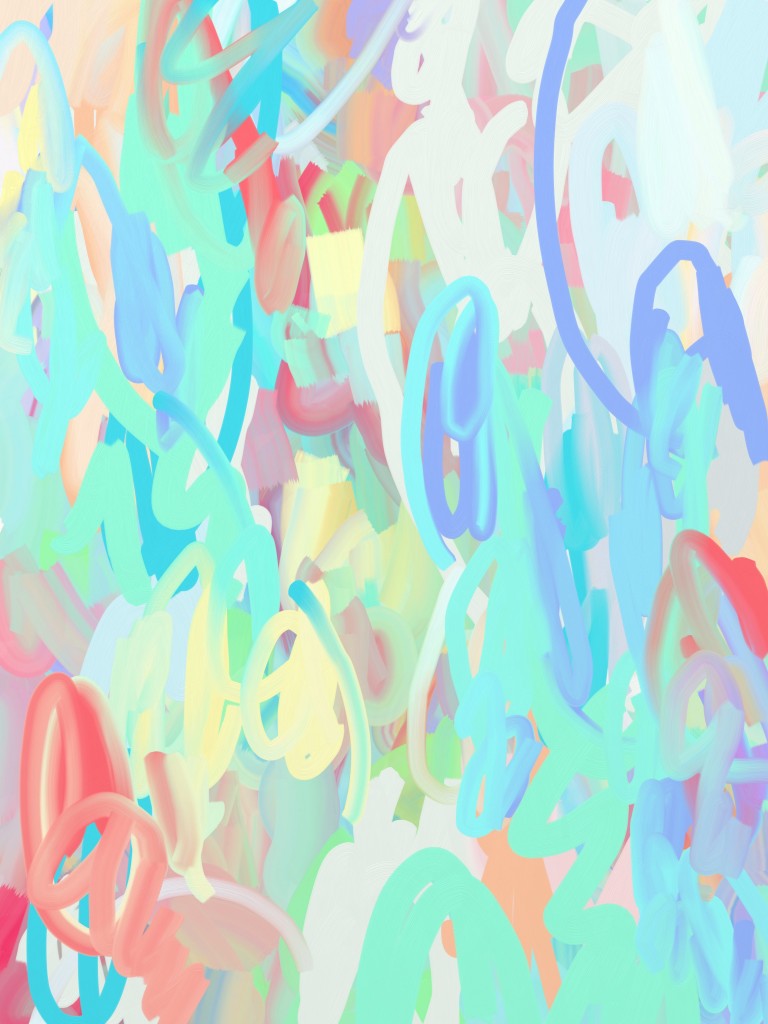 “Sam’s ideas for this whole installation actually all began with a photo that he remembered that he had taken of a strange air freshener hanging from the rearview mirror of his friend’s car.  Even before he found the photo, he began branching out with ideas stemming from this one random image in his memory by making a rough sketch of it, which you see here in the diptych, “Palm Study “ (2014), along with the recovered, original photo.”  From the diptych on the wall the rest of Davis’ installation expands outward into a grouping that forms a sort of white and clear, sculptural forest through which viewers have to make their way in order to see “Palm Study” up close.  While the two white, free-standing sculptures to the right look like cooler versions of cardboard cut-out plants or palm trees that one might find accompanying a minimalist stage set, the other two, to the right of the diptych, are decidedly figurative and retain the same laissez-faire comedic ease with which the project began, with their cartoonish curves, one clear-bodied form, “Poor Knobbs” (2014), complete with a bright blue bucket hat, ready for the beach. 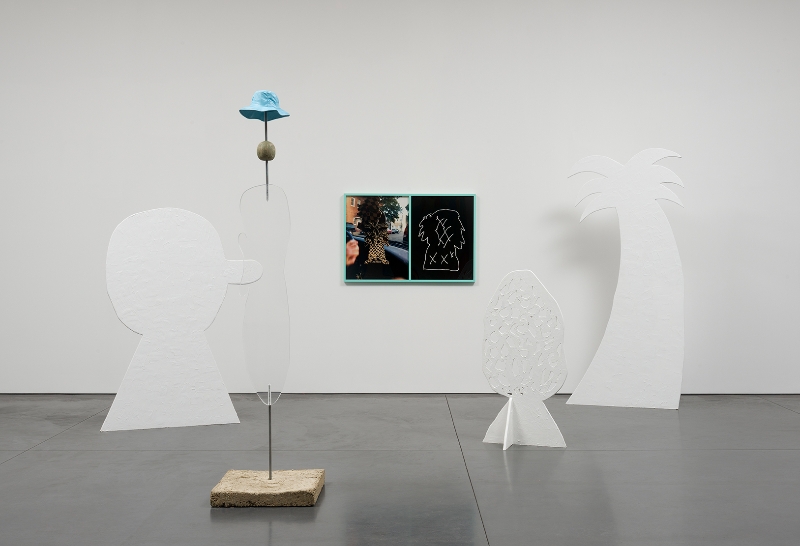 A particularly intriguing installation by Hazel Hill McCarthy III sharply juxtaposes Davis’ casual scene with three monitors mounted to the wall covered with black sheets of paper that have been rubbed with wax and are laden with bullet holes, the gold-plated sources of which lay in three respective mounds on the floor.  McCarthy has purposely obscured her videos to detract from their content and focus viewers’ attention on the patterns she has rubbed with wax onto each embattled black covering, a method she has continued to work and re-work throughout her practice. 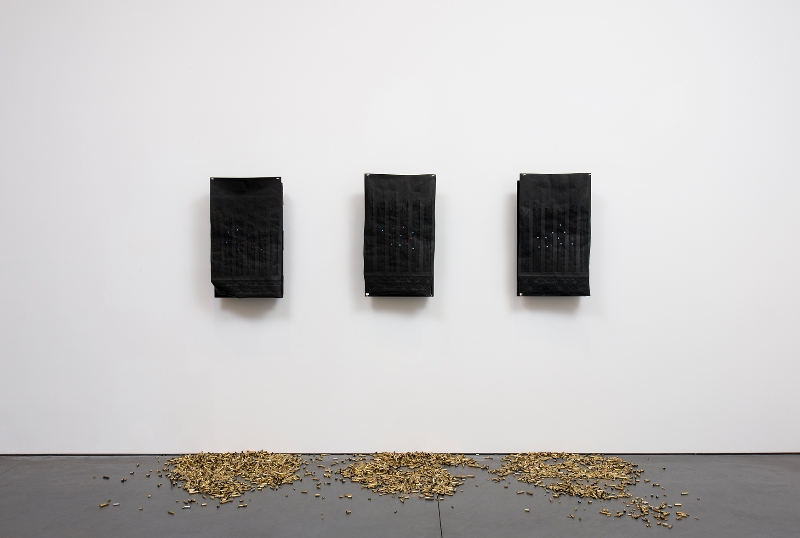 Traveling through Rubenstein’s small outdoor garden courtyard area that breaches the front and back galleries, viewers stumble upon, or perhaps some might even miss entirely, Jeff Baij’s slyly installed clear, acrylic, Predator-inspired masks that spring upward from the gravel, leaning on rocks, almost as if camouflaged.  They are in fact casts made from molds of the original films’ casts’ bio helmet props.   In the back room the constellation of works on view is just as stunning and eye-catching as in the front, but one work in particular calls drastic attention to itself.  “Speed Monument” (2014), by Spencer Longo, is less an installation or sculpture than it is a performative, if not functional object.  Indiscreetly bulky and mass-produced, “Speed Monument”, a bright orange Amazon pick-up consignment locker, stands atop a flat, industrial dolly.  A touch screen imbedded in its façade flashes with introductory instructions for claiming a package, while to its left in large lower case letter its greets you with the message, “order online pick up here.” 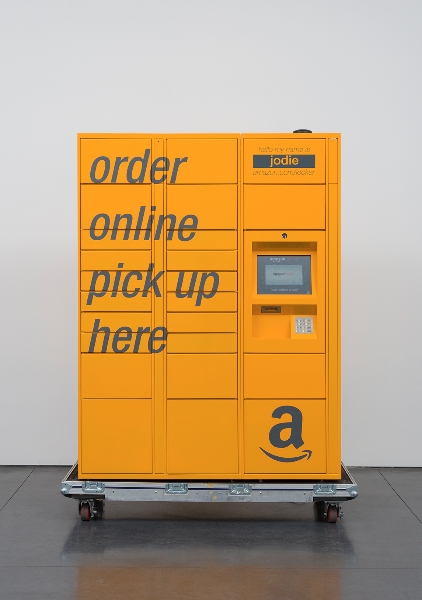 Vernetti describes the months of coordination that the installation required, the many back and forth conversations with Amazon seeming within themselves to possess artistic value of a Christo-esque nature.  “The original plan for this piece,” he starts, “was that it would be a fully functioning pick-up kiosk for Amazon customers in the area, who would get an address where they could come to retrieve their Amazon packages and would have to navigate the confusion of ending up at an art gallery.”  Clearly Longo is working beyond institutional critique or even Relational Aesthetics as he creates a contract not only with the enormity of Amazon as a company by “borrowing” one of their lockers, but furthermore, with each of its thousands of customers who are simply trying to complete the necessarily steps of today’s demotic e-commerce routine.  “Unfortunately we were not able to get to a point with Amazon where we could have a fully functioning pick-up site, so instead this piece is a model from one of their trade shows, but Longo will most likely continue to push this idea further until it can be fully realized.  There is of course a very Duchampian impulse at the core of “Speed Monument”, its like a ready-made in one sense, but the inverse in a way, because its primary function has not been intended to be thwarted, but in fact carried out to the fullest.”  When asked if this concept that would have incited strangers of all kinds coming in off the street to collect their packages may also have a Cageian quality to it as well, in the sense that Longo has fully opened up the doors to chance and happenstance, not knowing what kind of nut job or odd situation might arise from such an instigation, Vernetti agrees, “Yes, we were really excited by the idea of the kinds of confusion and awkwardness that the inclusion of this piece would cause for everyone involved.”

Also in the back gallery are several other particularly colorful and textural works including three digitally “painted” flags by Petra Cortright, two wall mounted sculptural, 3-D printed topographies made from stone compounds and resin by Dwyer Kilcollin, and in an adjacent, darkened room, a 3-D projection mapped video aptly titled, “Video Campfire” (2014), by Animal Charm, which plays in a counter-clockwise motion around a circular mound covered in carpet. 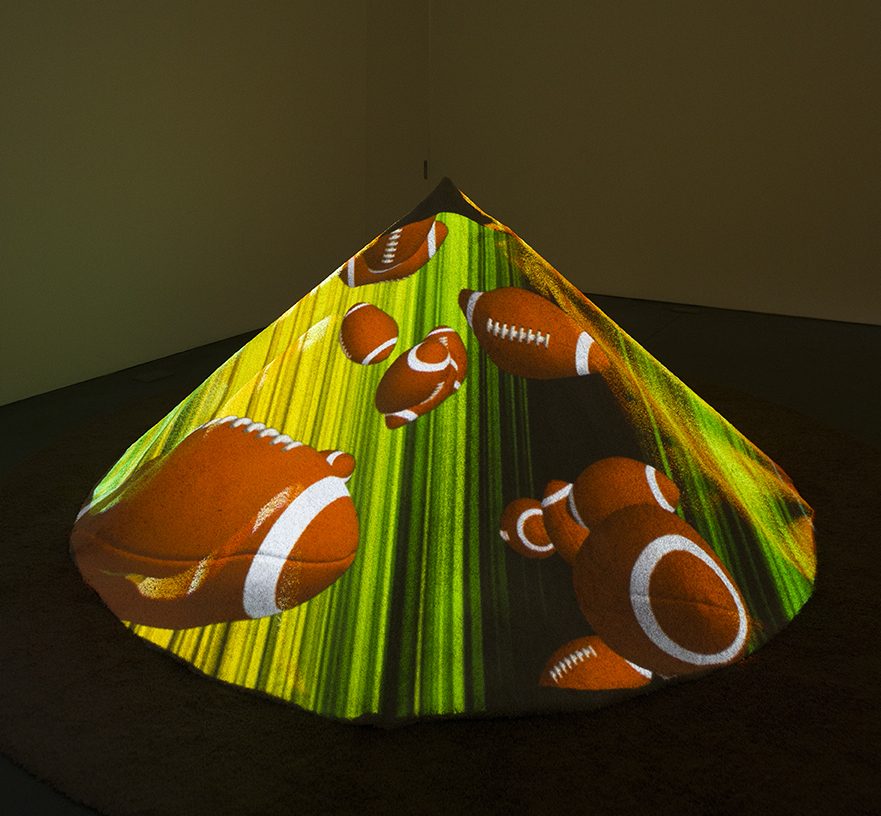 Vernetti’s insight into the connective practices, the culmination, in this case, of which is “Too Soon,” resonates strongly with the same kinds of tensions and ideals that each of these artists considers with their ever transitional practices that easily move from the frame of the digital screen to the three-dimensional space of the white cube.  Regardless of their context, Too Soon begins to get at the ways in which artists working through these kinds of modes are, as Vernetti concludes, “creating images that speak to their own inevitable morphing and dispersion.  They anticipate their own (re)-distribution and re-configuration.  One of the ideas that I think is important to this group of artists is a belief in the unfixed image.  Images today need to somehow be defined through their continual re-processing, re-appropriation, and re-contextualization.  I like to think of all the work in the show as that which resists the definitive.  To me these are objects and ideas subject to an internal flux, temporarily suspended in a state between iterations, versions, and change.”  To that end, the exhibition also rather importantly includes another component, which should not be overlooked.  Its accompanying website where a virtual exhibition can be accessed by anyone.  Here each artists’ works are represented in new ways that expand upon their physical contributions to the show, for example, the three videos by McCarthy that are intentionally obscured within the gallery installation are available to watch, side by side, thus further layer and complicating the meaning of the work altogether.

In this sense, interchangeability comes back into play in a strong way that is particularly important when we consider that the vast majority of these works were produced in 2014, a year that has only just begun, and was just a few weeks in the making at the time that this show was installed.  This fact, combined with the fortune-telling nature of these artists’ work, in their attempts, not only to consider the currently unforeseen effects of technologies that at the moment we take for granted as commonplace, but furthermore in making work that inherently changes over time, not in the performative, entropic sense, but instead by perpetuating an endlessly shifting set of interlocking constituents or conditions.  I mention to Vernetti that my initial reading of the title, “Too Soon,” was that this show would present work that went against the endlessly increasing pace of contemporary life, though it seems perhaps I had it all wrong.  To this he surprisingly responds, “ No I think that that is the case in a sense.  Even though these artists’ work plays off of the way that the world continues to change and become fractured as a result of living both on and off-line simultaneously, at the same time, by refusing to be declarative in the way that, lets say, a typical painting or sculpture might be, they are instead working the same idea over and over again within one work, so they are not speeding past things, but instead re-examining them from a multitude of angles, approaching their own work from various perspectives over long periods of time rather than finishing a work and moving on to the next.” 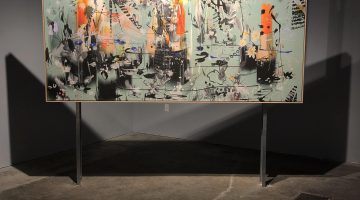