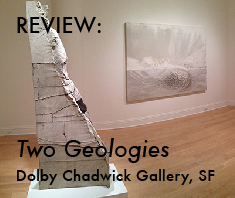 Stephen De Staebler died in 2011 at age 78, but not before he was privy to arrangements being made for his retrospective at the De Young the following year, “Matter + Spirit: The Sculpture of Stephen De Staebler.” A student of Theology schooled at Princeton University (BA 1954), he attended summer classes at legendary Black Mountain College, and later studied ceramics with Peter Voulkos at the University of California, Berkeley. In addition to the production of his own art, he was a professor at The San Francisco Art Institute and San Francisco State University, inspiring a new generation of clay artists.

Through rewarding yet physically difficult latter years, he was supported by second wife, Danae Mattes, an accomplished ceramicist in her own right, who he married in 1997. De Stabler and Mattes cooperated on projects both here and abroad, harboring similar environmental and archeological concerns. After his death, she continued to explore processes developed to express thoughts of geological erosion, evaporation and the effect of fluids in retreat, which she believes are mirrored in the human body as well.

The last half-century of Bay Area critical thought has been centered on discussions of both painterly figuration and conceptual art, but a good case could be made for regional abstract and funk ceramic works having made the boldest statement in Northern California artistic circles. Peter Voulkos, Viola Frey, Robert Arneson, Manuel Neri, David Gilhooly, Richard Shaw, Jim Melchart…Stephen De Staebler…a long list of ceramic artists with distinguished careers, whose works as a whole have yet to be situated within the significant international context it deserves. 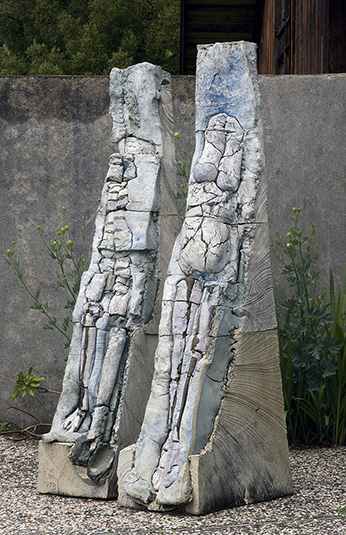 This show examines the artistic and personal relationship of two artists that worked closely together, the surviving spouse showing admiration and insight into the work of the departed. De Stabler’s work in the exhibition draws from sculptural figuration produced in the late 1970s. I hesitate to say the artist had a “classic” period,” but these look pretty evocative of the artist’s finest works in expressionist figuration. De Young curator of American Art, Timothy Anglin Burgard, has written that, “…a sensibility persists in the surfaces of his works, which are marred by cracks and breakages that simultaneously suggest erosion and petrification…could be damaged or decayed sculptures excavated from a previously unknown ancient civilization…and thus provoke viewers to speculate on their own meanings and origins.”

This is a special exhibition in that the artist’s widow has personally selected from the wide availability of her late husband’s production, selected to compliment her own works, which evoke a kindred spirit expressing similar concerns of meaning and origin. 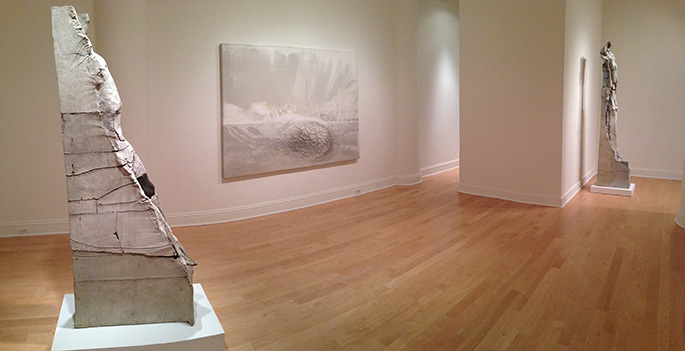 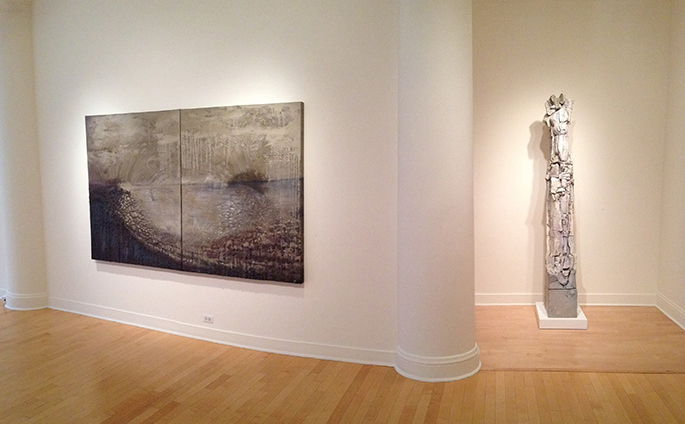 Mattes’ clay, paper and pigment on canvas works are a riff on that of her partner, whose distressed surfaces find common ground with her own experiments of flow and evaporation on the surface of the canvas. The beauty of the works – and they are beautiful- lie not from the hand of the artist, but in the rigorous observation of nature’s inclination and patterning.

I am not surprised to have met artist Christel Dillbohner, when I first walked into the gallery, and found she was a friend of Danae. I met Christel during the course of an exhibition I co-curated on the Japanese Gutai artists, who during the mid-1950s distanced themselves from craft and the artist’s hand, and instead stressed documentation of active engagement with the canvas; be it painting with one’s feet, firing bottles of paint from a homemade canon, running through a paper screen, or “challenging mud” by wiggling in wet cement and clay in one’s underwear. In all these things, it was the process that was important to the artist, and the resultant image surprising and secondary. 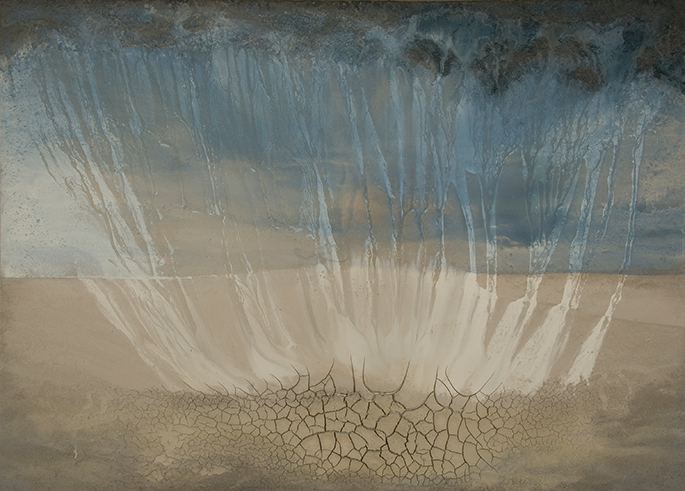 The work of art is left to nature’s mysterious order. It is not haphazard. When one paints with his feet for a long time, he learns over time how much paint to apply, whether it should be thick or fluid, what colors work best.  If one throws bottles of paint, over the long haul little tricks can be found to improve the work, move it forward, make it worthy of dedicated exploration. If one creates “evaporation pools,” one quickly notices the nuances of decay and loss.

It takes a quiet fortitude to move forward upon the conviction that there is merit in the adventure, that it could lead to a body of work, even though you feel you are in the experimental phase and never quite there. Formerly thought of as a sculptural artist working in clay, in the current exhibition Danae Mattes opts for canvas support, the cracks and crannies of the evaporated streams of water and pigment achieving a painterly harmony that human composition rarely accomplishes.

De Stabler doesn’t need any extended critique at this point. He was in the history books a long time ago, and he’ll continue to reap his deserved praise in the future. Meanwhile, the living go on living. What better way to ruminate upon it all than by reflecting upon the past, while casting for a way forward? Mattes has found that clay-based works on canvas can express loss in a beautiful way. It’s a skill honed from many years of tender care.