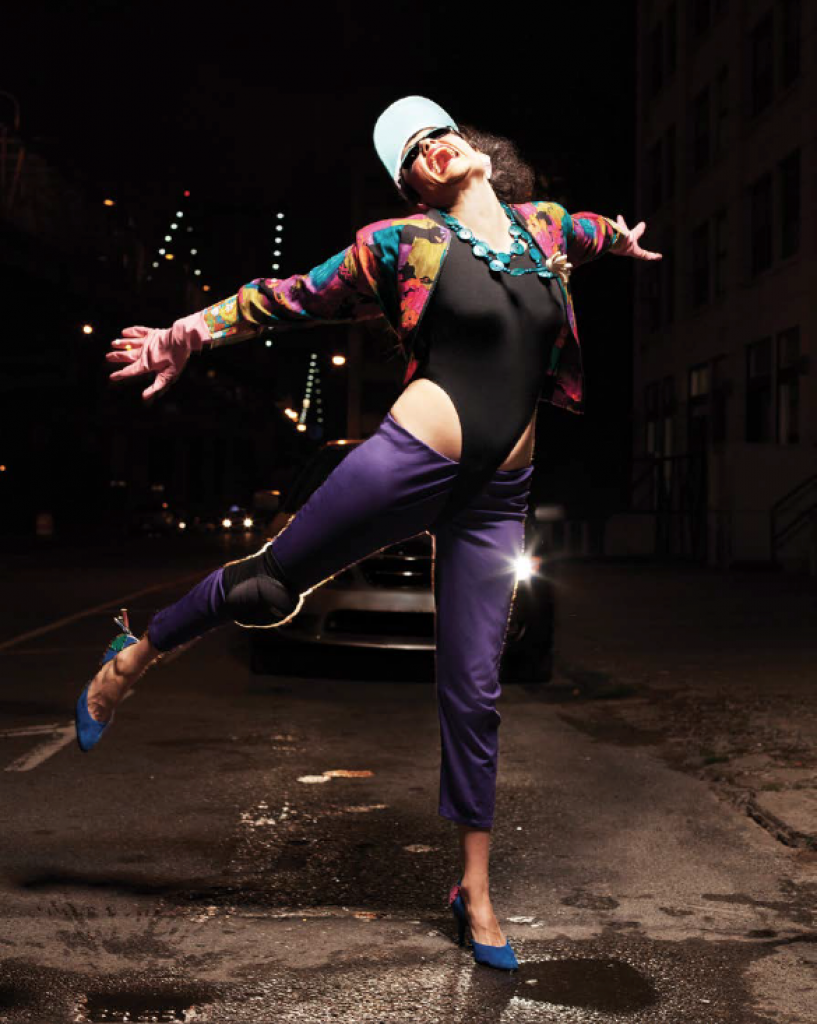 Photograph by Allison Michael Orenstein. Courtesy of the artist.

“When it’s time to do the right thing, I like to do the wrong thing,” croons Dynasty Handbag on the first track of her recently released album “Cosmic Surgery.”

Accompanied by electronic sounds and reverberations, the song is recited like improv-style spoken-word (think Lydia Lunch), or what she refers to as “depressive black metal.” The end of the song lures the listener in with sexual-sounding mantras, are these supposed to be sexual? Or are we just trained to be pervy listeners, consuming provocative narratives the only way we know how?

Conceptually, consumption is a theme throughout the album, from material goods to how we consume sounds and messages, and it can be very hard to follow. This is Dynasty Handbag’s jam.

The alter ego of Jibz Cameron, Dynasty Handbag is a New York-based performance artist that Cameron has been developing for over ten years. Embracing comedy, theatricality, and haptic-ness, she typically appears clad in some sort of leotard, donning disheveled hair and wild colored makeup that looks as if it has been frantically applied, smeared across her face. While the narratives and personas of her performance vary, Dynasty Handbag always appears visibly awkward, clumsy, and often distraught, yet she always manages to finesse the viewer’s relationship to her as a performer, often by rejecting the audience completely. Still, each time feels like a new experience.

I am reminded of Gertrude Stein’s “Composition as Explanation” (1925) where she writes on the relation of art and beauty to acceptance: “Of course it is wonderfully beautiful, only when it is still a thing irritating, annoying, stimulating, then all quality of beauty is denied to it.” (1) Through rejection, denial, and personification, Dynasty Handbag complicates status quo tropes surrounding beauty, and it’s beautiful.

In her performance “Brothers and Sisters and Motherfuckers” (2010), Dynasty Handbag hosts a holiday family dinner and performs as each of the family members which embody a dysfunctional group of kin, each member with their own stereotypes (e.g. the snobby high-maintenance sister). It’s comedic, but there is a deeper connection: we all have family so we know this shit is real. Do we laugh at ourselves as we laugh at her performance? In “Eternal Quadrangle” (2011), Dynasty Handbag is on a dating show, and she performs the voices for her eccentric array of potential suitors (which includes a stuffed animal and a disembodied brain) in front of a live audience. Each “bachelor” has his own lure, for instance, the golfer looks great on paper and fits properly into a heteronormative structure of what a proper suitor should do and say. In the end, Dynasty Handbag chooses none of them, wondering if these are her only options. Here rejection is the ultimate freedom.

I’m particularly obsessed with a video of Dynasty Handbag performing “Santa Baby” at a theater in New York City in December of 2012. In the video, she is dressed in a metallic jacket with tights as pants, here, with the crotch area oddly emphasized, almost as if they were on inside out. She improvises and modifies the holiday song, wailing, and screeching. She rolls around on stage, legs spread. The song is about desire: a sexualized cry for material goods, with immaterial emotional undertones.

Prominently, a listener hears the following in her refrains: I NEED A DADDY… I WANT A BABY…A BOOPY BOOPY BOOP….I’M A BABY…YOU’RE A DADDY… the song goes on. It’s absurd and bewitching.

Through embodying the woman delivering the song, interspersed with made up lyrics, it’s hard to tell if this is mockery or provocation, or if these assessments even need to be made. Perhaps this is just a better version of the old classic, which can be read as capitalism wrapped in a melody. In “The Queer Art of Failure”, Judith Halberstam poses the concept of “low theory” which is a process of discovering alternative perceptions to conventional notions of success and society, which includes being taken seriously.

Halberstam writes, “Being taken seriously means missing out on the chance to be frivolous, promiscuous, and irrelevant.” (2)

In my opinion, “Santa Baby” is an embodiment of Halberstam’s hypothesis. Dynasty Handbag performances and songs embrace comedy and failure as a different version of success. Her consistent frantic-ness is the message.

This artist highlight is selected from Issue 15 of SFAQ.

–Tricia Lawless Murray: The End of the Endgame