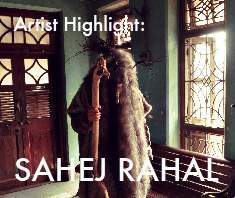 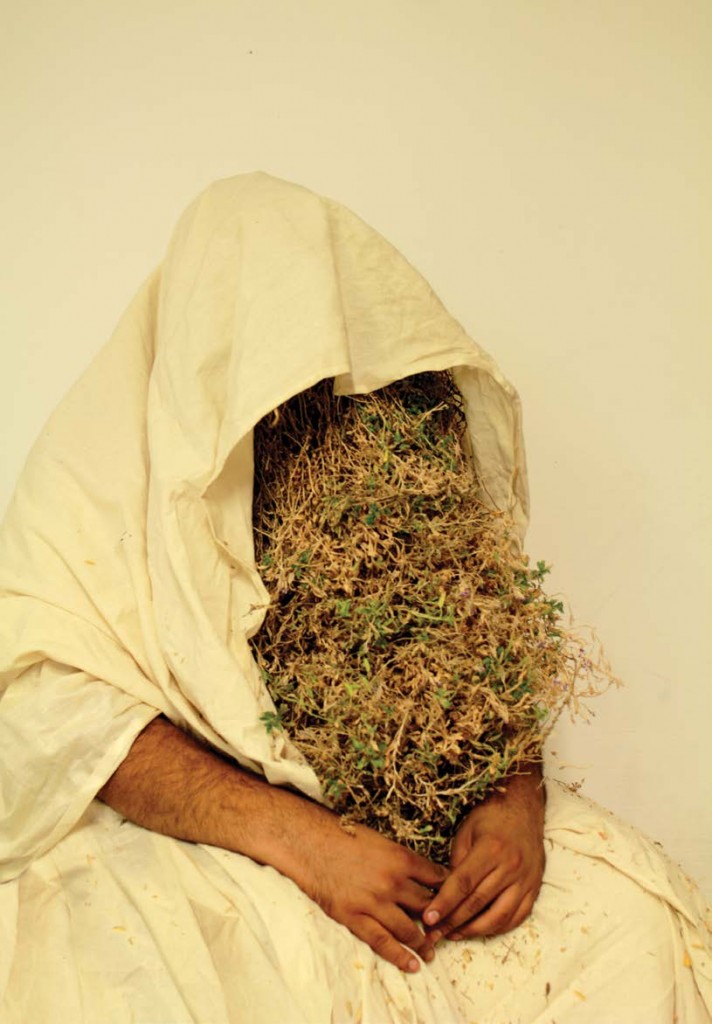 It is a striking image: a robed and hooded man, seated and slightly hunched, his stubby fingers resting gently in his lap, his face obscured by an unruly beard constructed of moss. Abstruse and absurd, it is also human, humane and deeply affecting. I first encountered the image in an art review, and immediately knew I wanted to see “The Groom,” 2012 in person.

I’d discovered the art of Sahej Rahal while preparing for my trip to Mumbai. Browsing the gallery websites so as to chart an itinerary, I was struck by the cover image on the Chatterjee and Lal Gallery page announcing Rahal’s solo show. At once shadowy and luminous, “Tandav III,” 2012 depicts a spectral figure encircled by brilliant arcs of light. I was hypnotized.

In the week leading up to my visit, Rahal would resurface many times: in a Time Out Mumbai review (1), Mumbai Boss e-blast (2), and GQ India review (3). The press clearly loved him; the Mumbai Boss article optimistically proclaimed: “Why Sahej Rahal Could Be The Art World’s Next Big Star.”

While “Forerunner” was Sahej Rahal’s first solo show, he is not a newcomer to the art world, having immersed himself in the art scene since the age of 18 – attending shows, talking to artists and apprenticing with them. One artist in particular – performance artist Nikhil Chopra, who is familiar to Bay Area audiences due to his inclusion in “The Matter Within” exhibition at the YBCA – holds special influence over the Mumbai-based, 25 year-old artist. (Chopra is faculty at Rachana Sansad, the art institute from which Rahal graduated.) Gallerist Mortimer Chatterjee waggishly referred to Rahal as “somewhat of a residency slut,” referencing his artist residencies in Zurich (FUTUR), the United Kingdom (Gasworks), New Delhi (Khoj) and Rome (ZegnArt). 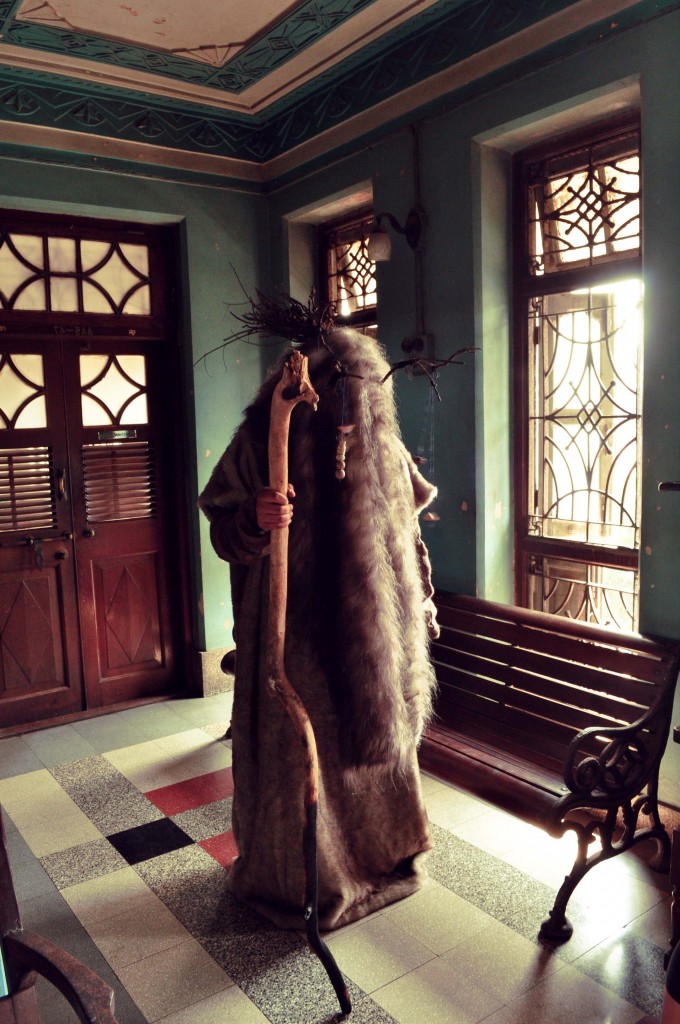 Rahal’s cross-disciplinary oeuvre encompasses sculpture, performance, and video. His website offers the following artist statement: “I view my body of work as a growing narrative that draws upon mythical beings from different cultures, and brings them into a dialog with the present. Within the narrative, these beings perform absurd acts in derelict corners of the city, transforming them into liminal sites of ritual.”(4) Much like Matthew Barney, he is developing a personal mythology, drawing on diverse influences (including Joseph Beuys, Star Wars and Jorge Luis Borges).

Rahal constructs his own costumes, often ideas realized in the extreme: like the overgrown moss-beard (“The Groom,” 2012) or the turban that was so large it obscured his ability to see (“Bhramana II,” 2012). In an email exchange, he wrote of his fascination with “the seductive nature of ornament, especially the ritualized ornament.” (5) Clothed in these fantastical garments, often wielding phallic props like the didgeridoo (“Bhramana II,” 2012) or the light saber constructed from tube lights (“Tandav III,” 2012), Rahal invades urban spaces, performing invented rituals. (By way of explanation, the Brahmanas are Hindu commentaries, detailing the correct performance of ritual. Tandava is the divine dance performed by Shiva, believed to be the source of the creation- preservation- dissolution cycle; Rahal performed “Tandav III” brandishing tube lights like giant glowsticks.) 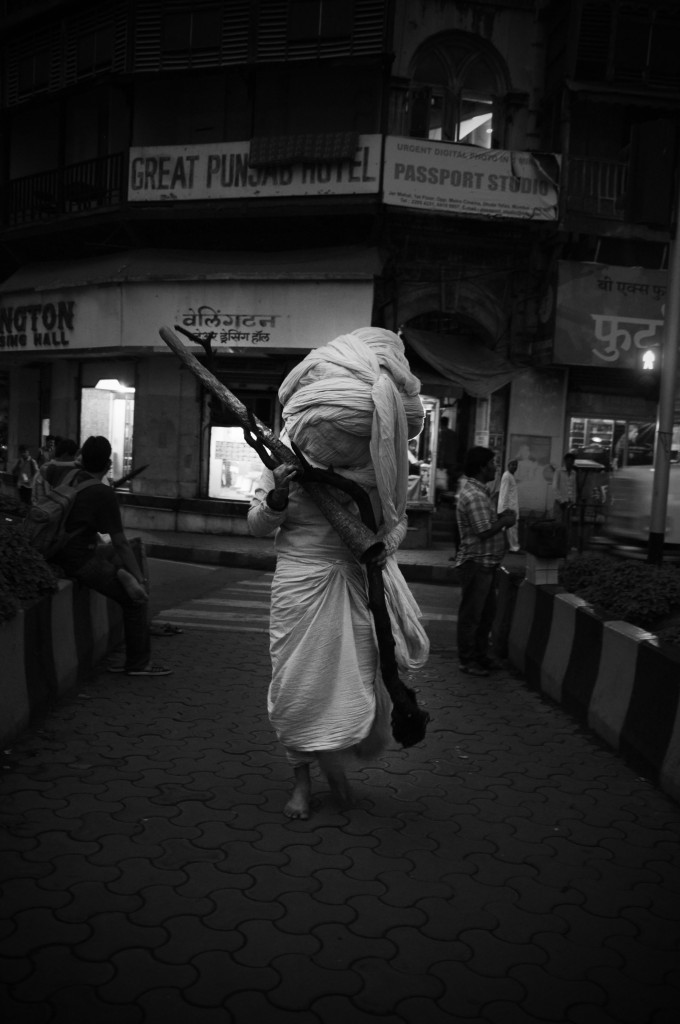 As a physician, I’ve long recognized the power of medical rituals: the litany of questioning; the inspection, palpation, percussion and auscultation; the careful positioning of the human body; its methodical cleansing and draping; the breach of skin drawing blood. There is beauty and elegance inherent in the precision; comfort to be found in the familiarity of repetition. Perhaps this is part of my attraction to Rahal’s work: the shared performative and ritualistic aspects of my medical practice and his art.

I visited Chatterjee and Lal Gallery twice – an initial scouting trip, and a second visit to meet Mort Chatterjee and accept delivery of my latest acquisition. I connected instantly with “The Groom,” 2012 – I knew its muted colors would work well with my aesthetics; more importantly, I fell under the spell of its mysteriousness and absurdity. It is a picture begging the imposition of a narrative.

“The Groom,” 2012 traveled back with me, safely shielded in a sturdy cardboard tube. It is currently at the framers. I am considering installing it in my entry alcove: a man in waiting, indeed, “twiddling his fingers” and “letting out a huffing sigh.” (5)

Waiting, perhaps, for the arrival of a special guest, or for an unwelcome guest to depart.

This piece was selected from Issue 15 of SFAQ.

–Tricia Lawless Murray: The End of the Endgame