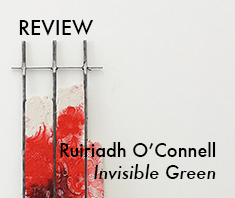 “Invisible Green,” Ruairiadh O’Connell’s first show with Jessica Silverman Gallery, delves into ways in which architecture and design work to distance and distract the upper classes from unsavory things. 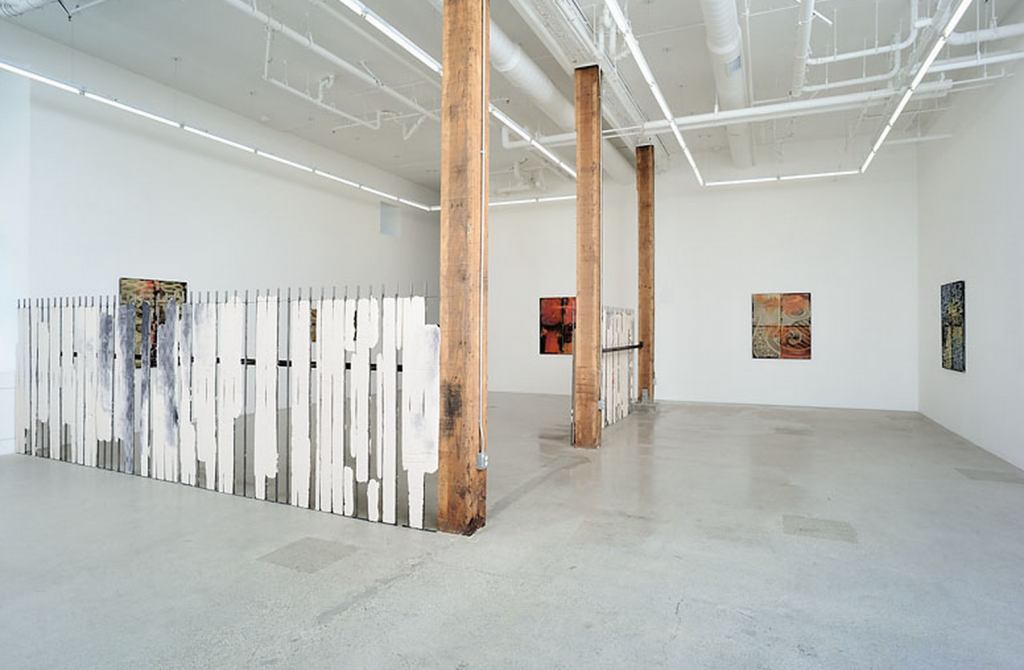 O’Connell’s investigation of public and private spaces is particularly apt because of the gallery’s location in the Tenderloin, a neighborhood that contains more than 6,000 homeless according to a recent study by the city. Visitors will notice an immediate response to this statistic: the entrance is locked, requiring the gallery assistant to either buzz or manually open the door. I don’t blame them for wanting to secure thousands of dollars worth of artwork and equipment in a neighborhood that thrives on illicit activity. But the experience creates a stark contrast between the privilege of art viewers and the social tenuousness of the streets.

While it certainly brought attention to the rarified air of the gallery environment and art institutions in general, the aim, as underlined by O’Connell’s title, was to reach beyond such a limited critique. 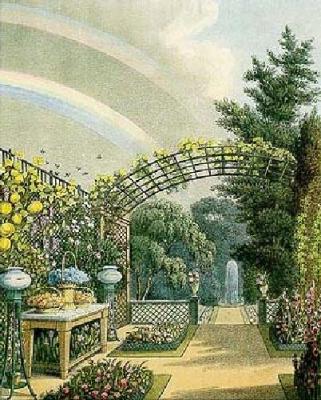 An illustration of an English garden. Notice the invisible green.

The phrase “invisible green” refers to the green paint used to cover the gates surrounding English gardens, made popular in the early 1800s, to create a more seamless experience of nature within the confines of a private urban garden. In this show, O’Connell draws a connection between Victorian England’s methods of distracting and containing its populations through design and patterns, and those of contemporary United States—namely Las Vegas casinos.

The divide, conquer and distract approach of O’Connell’s subjects is mimicked within the gallery itself. O’Connell has created multiple screens within the space that limit the viewers’ access to the work depending on where they are standing. A white picket fence-like structure with strips of white resin, molded with the patterning of Victorian lace, intersects the two beams at the front of the gallery, blocking the view from the street. Another one splits the gallery in half again, perpendicular to the front windows, creating a small space inside the two structures. While there is no difference between the works on the walls inside and outside the fencing—they are all part of his series of Las Vegas carpet patterns—this layout creates a sense of priority within the gallery. Being “inside” the back space feels protected and special; one expects the revealing of a secret. In this case, the only secret is that there is nothing particularly different about the space, other than your view of the rest of the art being blocked. 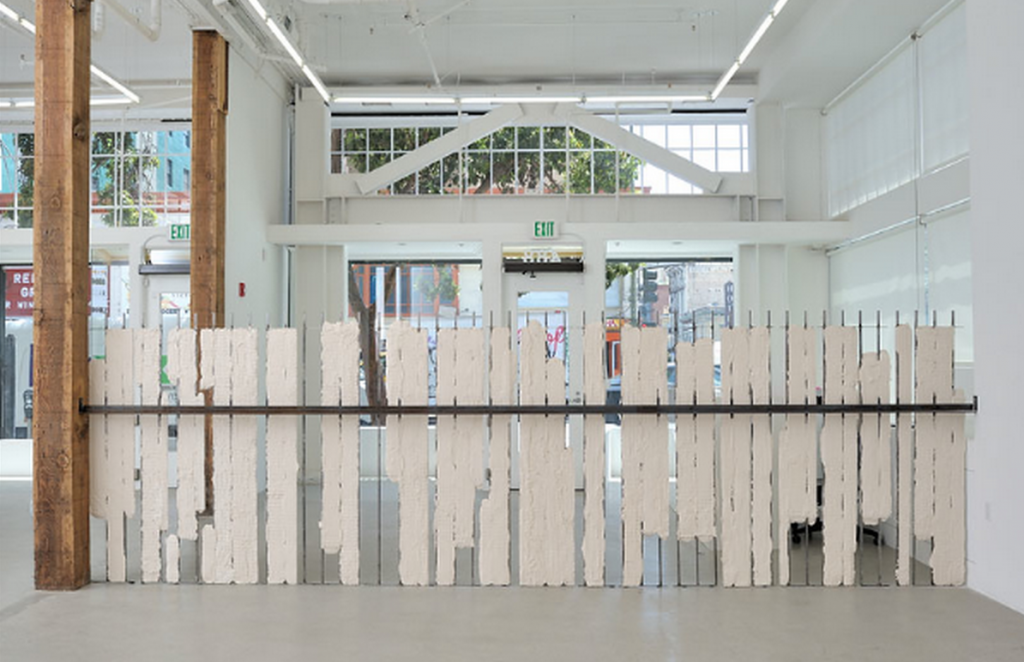 The two-dimensional works sit on the walls like stained glass windows, each one comprised of four metal frames filled with dyed wax that are then screen printed with photographic images of Las Vegas casino carpets. 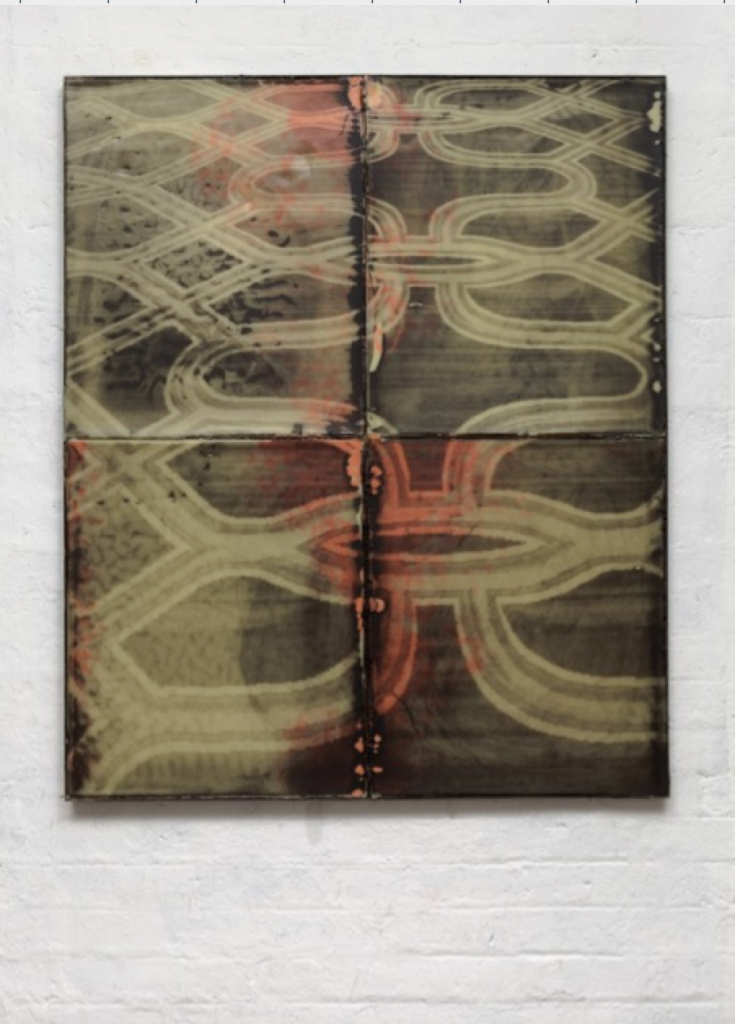 Ruairiadh O’Connell, “The Venetian,” 2014. Silkscreen on wax in welded steel tray, 47 in. x 39 in. Courtesy of the artist and Jessica Silverman Gallery.

O’Connell compares these seemingly disparate references by connecting the way both cultures employ distraction through design and pleasing patterns to lull the citizens/consumers into feeling a sense of freedom and access, masking the mechanisms at work that manipulate a populace. While lace curtains and fences are meant to control access and the flow of information, casinos are designed to disorient gamblers, limiting their resources by indulging  their vices. The sights and sounds are meant to put visitors in a heady trance that encourages them to act outside of their senses: spend too much money, drink more than they should, and do things that they will later regret. 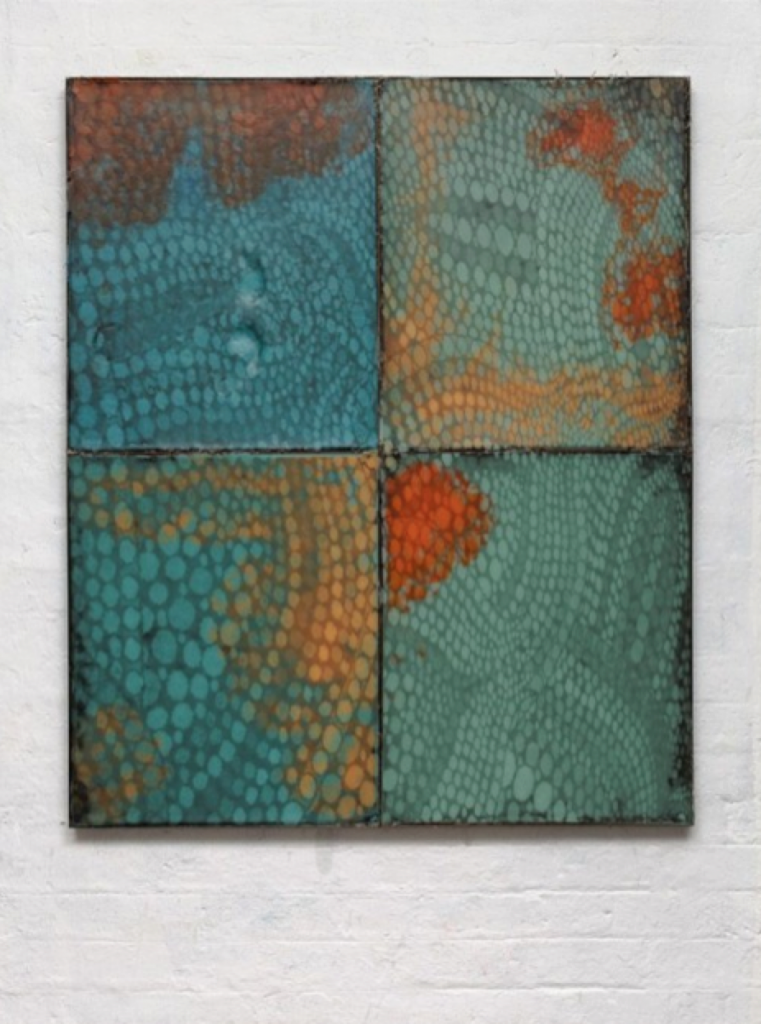 Ruairiadh O’Connell, “MGM Grand,” 2014. Silkscreen on wax in welded steel tray, 47 in. x 39 in. Courtesy of the artist and Jessica Silverman Gallery.

This sense of disorientation is depicted through the psychedelic swirls and off-kilter screen prints on O’Connell’s panels. While you’re looking at them, the image appears to switch back and forth between flat and perspectival imagery; design and depiction. This subtle perspective shift is particularly successful in “MGM Grand,” which tilts at a vertiginous angle to the right—as if the photographer were bending forward and to the left with their head angled up in a moment of drunken stumbling.

Looking at “The Aria,” like many of the pieces, feels like you are looking through a lava lamp at the world. The art deco swirl pattern and the washes of color give a feeling of being under water.

“The Venetian,” a mostly black-and-white panel with a pattern of intersecting lines, reminds me of the infamous carpet in the film “The Shining.” The picture, which has a deeper space than many of the other works in the show, recalls the long hallway shots of Danny biking on his tricycle. This reference seems apt as both use patterning as a way to describe underlying psychological tensions.

Ruairiadh O’Connell, “The Aria,” 2014. Silkscreen on wax in welded steel tray, 47 in. x 39 in. Courtesy of the artist and Jessica Silverman Gallery.

While the themes—the opiate properties of capitalism and the private/public—are potentially a bit shop worn, O’Connell’s site-specific installations (he made the fences in the gallery before the show) and unique material approach keeps the show feeling fresh and engaging. The intentional-or-not commentary on the populace’s ability to turn a relatively blind eye on the state of the Tenderloin is interesting. With rent prices increasing (exponentially?) and more people moving here to cash in on the boom, how long will the TL homeless have a street like Ellis to camp out on? Technically the sit-lie law makes their street camps illegal, but the irregular enforcement drives home the subjectivity of this public/private distinction. I imagine one morning we will all wake up and the streets will be empty, the result of this Giuliani-esque sweep.

For more information about the the show, visit Jessica Silverman Gallery.

Previous contributions by Sarah Thibault include:

Review: 2014 MFA Thesis Exhibition at California College of the Arts

Next post SFAQ Pick: A Blind Date at the ICA, Philadelphia