Christy Gast is back from her Kadist residency in Paris and yesterday morning we went to the beach together. There was a storm cloud in the distance over the water heading straight for us—a dark rain cathedral, pouring grey against the bright and colorless sky.

I took a bus down to South Beach to buy a copy of Thomas Hardy’s “Tess of the D’Urbervilles”. Once I had it in hand I crawled onto the white sand to read. The sky was now fully overcast, the breeze strong, and for the first time I didn’t put on sunscreen.

At the end of the “first phase” of the novel Tess is raped in the forest by her employer. Written in 1892 it feels relevant to our ongoing public conversation on masculinity and the deeply engrained culture of rape. Here is the scene right after, Tess says she wishes she had never been born:

He shrugged his shoulders. She resumed—

‘I didn’t understand your meaning till it was too late.’

‘That’s what every woman says.’

‘How can you dare use those words!’ she cried, turning impetuously upon him, her eyes flashing as the latent spirit (of which he was to see more some day) awoke in her. ‘My God! I could knock you out of the gig! Did it never strike your mind that what every woman says some women may feel?’

‘Very well,’ he said, laughing; ‘I am sorry to wound you. I did wrong—I admit it.’ He dropped into some little bitterness as he continued: ‘Only you needn’t be so everlastingly flinging it in my face. I am ready to pay to the uttermost farthing’…

At this point, horrified, I looked up from my book and out at the horizon: the sky was an ultramarine blue, the water glowing a light green. I stared for a very long time at this meeting, a peculiar imbalance, thinking of poor Tess.  Last week Nancy Goldring and I looked into the same horizon in the evening. “What would you call that color, the sky just above the horizon?” I asked. “Indigo” said Nancy. We talked about colors and the words for colors— she explained that the deep blue of that horizon had more “weight” than the color of the sea below it because we are seeing into the sky for miles which makes the richness, depth, and weight of the color, whereas we see comparably shallow color “across” the surface of the sea.

As it turns out, that first eighty pages were the perfect amount of time on a cloudy day to become properly pink. I squeezed my thigh to see a white after image—ghostly early proof of a sunburn.

I’ve been thinking about the timing of things, the random intersections of people, places and feelings and how we make meaning of them; of colors, textures and sensations in art and in our lives. There is a beautiful passage from “Tess” that relates to this: “In the ill-judged execution of the well-judged plan of things the call seldom produces the comer, the man to love rarely coincides with the hour for loving. Nature does not often say “See!” to her poor creature at a time when seeing can lead to happy doing; or reply ‘Here!” to a body’s cry of ‘Where?’ till the hide-and-seek has become an irksome outworn game. We may wonder whether at the acme and summit of the human progress these anachronism will become corrected by a finer intuition, a closer interaction of the social machinery than that which now jolts us round and along; but such completeness is not to be prophesied, or even conceived as possible.” 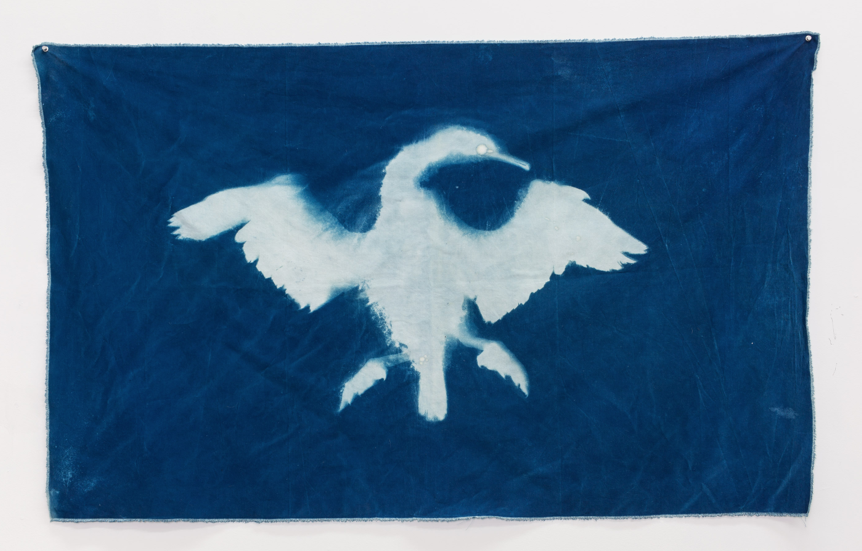 Christy Gast
“Cormorant I (Straight of Magellan)” 2014
cyanotype on canvas

Today Christy and I went to the beach again in the early morning. The water was clear and glassy. She wanted to make a large new cyanotype for part II of NIGHT TIDE, that will open next Saturday. We laid out the eight feet of treated fabric and spread seaweed on top in an undulating line, mimicking the wave contours we found it in on the shore. Almost immediately the olive colored cloth was turning blue and Christy told me to grab a corner. We picked it up and ran into the sea laughing, carrying it like a banner between us, swimming with it to wash the excess out. It left a beautiful imprint in pale blue, almost the exact color of the Miami water. “This one is called ‘Morning Tide’,” she said. In NIGHT TIDE pt. I  there are smaller banners on thicker fabric and with deeper blues— imprints of kelp and a dead Cormorant she made in the Beagle Channel and the Straight of Magellan. Cyanotypes are deep blue memories of physical experiences, somewhere between a drawing, a performance and a photograph.

Next post Marian Goodman: In Conversation With Constance Lewallen