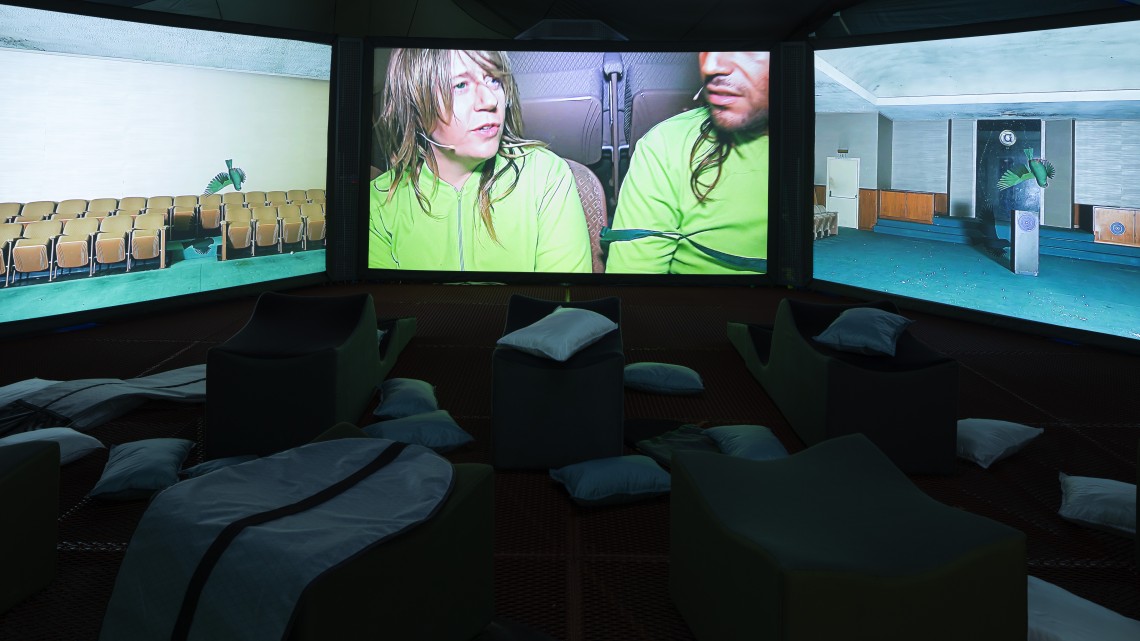 We have by now come to expect a certain kind of frenetic environment upon entering en exhibition by Ryan Trecartin and Lizzie Fitch. Their first solo show with Regen Projects is, however, surprisingly concentrated. Rather than transforming the gallery into a multifarious conference room, public park, or other such generic space as we have seen in the past, the main attraction is set within one spacious interior. In the main gallery stands a sprawling camping tent, inside of which five large screens play five intersecting videos. Five screens are placed in a rotunda with the sixth screen situated above audience’s heads. Scenes and actions slip from the edges of one screen to the next, reminiscent of one’s disappearing and reappearing mouse jumping seamlessly between multiple computer screens. Though the tone of the installation still evokes Trecartin’s quintessentially complex, kaleidoscopic lens into some alternate version of the future, the energy is noticeably more focused this time around. Voices are less manipulated and dialog and action continue without consistently interjecting content. In fact, dialog in general takes a back seat, while clusters of actors roam through the dusty, make-shift sets, appearing more like moving props than fully developed characters. 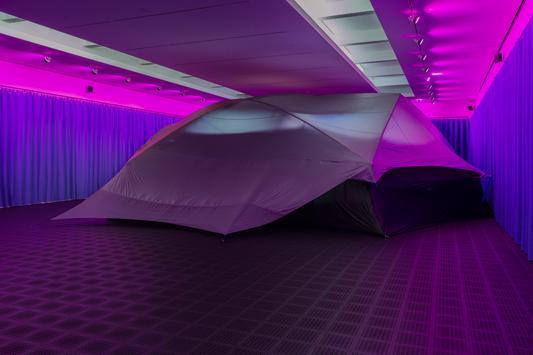 The transitions between scenes or segments are notably more serene as well. Though a funky electronic musical riff that features various vocals backgrounds all of the visual content, the inclusion of large words and voiceovers have been replaced with longer and rather elegant animated scenes of forests and natural elements. The way the videos have been set up, one’s experience is entirely dependent on where they have placed themselves. Sitting in the ideal spot, viewers are able to see a picturesque, if highly exaggerated, meadow with Technicolor leaves falling to its plushy ground. On a peripheral monitor, the cast, mostly clad in bright shirts with targets on their backs, wanders though fog, broken glass, and dim hallways while randomly discussing Coke machines and college parties.

Within these juxtaposed worlds of digitally rendered foliage and the interior of an old, decrepit, and “spooky” building through which Trecartin’s characters venture, many cultural and pop-cultural issues and iconographies appear through visual cues of branding symbols like Coca Cola, NASA, Jurassic Park, the American Flag, Corona beer, the Wildcats sports team, and the conceptual fashion designer TELFAR. There is also an enhanced sense of transparency as the “meta” seeps in as Trecartin himself takes on the character of a guide or director, at times supposedly breaking character to ask questions of other members of the cast and crew and speaking directly to the camera. 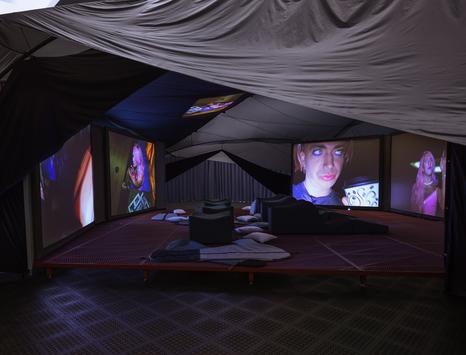 Physicality, such as destruction and stunts—throwing large tires over theater balconies or riding a motorcycle that hangs on a zip-line through the air while drones fly around in all directions—is at the fore of these complexly overlapping stories. It is this kind of action over character development that pushes the disjointed story of a group of adventure seekers along, as opposed to the incessant, coded chatter and mind-boggling editing that drives many of Trecartin’s previous videos. Through the chaos, the shifting cast takes up the hokey tropes of spooky reality shows like Ghost Hunters as they explore a large, outdated building with faded carpets and broken bathrooms, in search of “something scary.”

Next post Toward a Folk Video Game (Part Two)