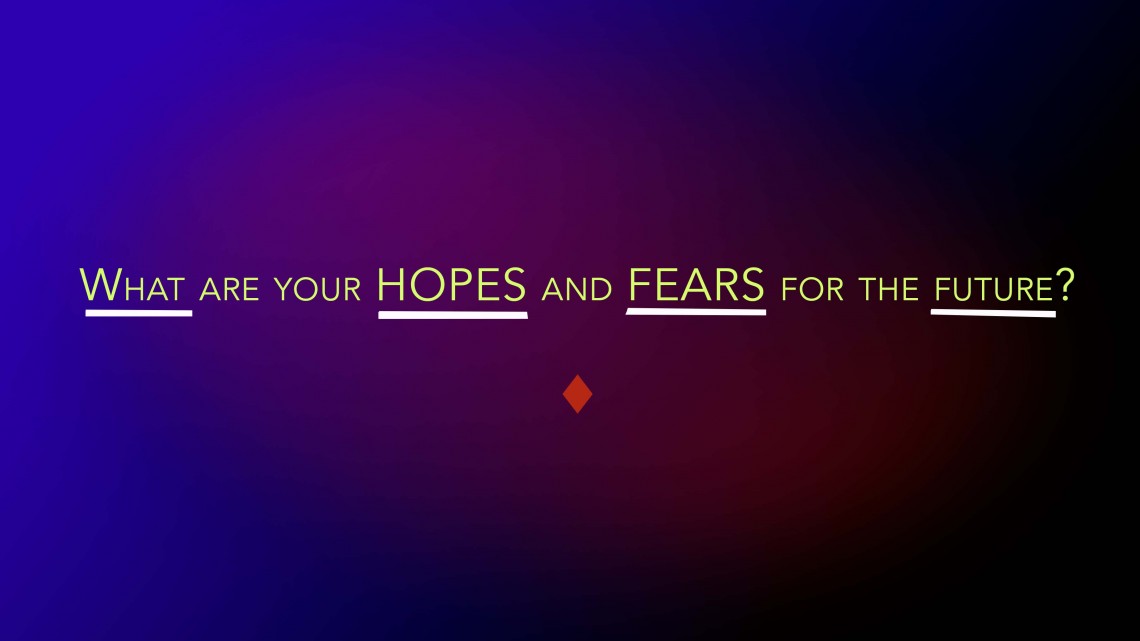 PARTICIPATE: How do you see the future unfolding?

I invite you to add your own HOPES and FEARS tweets to the Speculative Futurism project by using the #SpecFuturism hashtag.

Visit this project online to see it unfold on Twitter at @SpecFuturism and on Tumblr at speculativefuturism.tumblr.com.

Thank you to the invited group of featured Speculative Futurism participants, whose HOPES and FEARS are featured in this spread’s illustration:

When we think of the future, it can seem impossibly far away. Looming like a storm cloud on the horizon, it rumbles and rolls, anxiously anticipated yet only loosely prepared for. What if there was a way to reverse-engineer that daunting cloud, and decide for ourselves which type of sky we might cast overhead?

Since H. G. Wells published Anticipations of the Reaction of Mechanical and Scientific Progress Upon Human Life and Thought: An Experiment in Prophecy in 1901—and probably earlier—humans have been captivated by the desire to anticipate how the world will look in the future. Emerging as a field of study in the 1960s, “future studies” is a branch of research focused on postulating on potential futures and examining the conditions and mentalities that could affect what comes to pass. Interestingly, future studies (also referred to as futurology and futurism) blurs the lines between art, science, and history, coalescing in the gray area created by the nuances of the fourth dimension, i.e., the passing of time.

Futurists of the early 20th century glorified the possibilities of the future as they saw the power and speed of new technologies and scientific breakthroughs as invigorating catapults capable of launching society above and apart from its glum past. To them, the future was everything. By contrast, today the concept of “the future” has almost become cliché. While institutions such as the Long Now Foundation (established 1996), the Singularity University (founded 2008), and programs such as California College for the Arts’s new strategic foresight MBA prove that the future is still very much a prominent topic of study and discussion, it seems that we’re no longer quite as energized by thoughts of the future. Perhaps we have become exhausted, accustomed to our ever-expanding dependency on technologies and acclimatized to the contemporary condition of information overload. With so much sensationalization, there’s little left to champion.

Recently I’ve pondered how and why we might invigorate our attempts to engineer the future, especially from a cultural perspective. Why do we feel stuck with the way things are when there’s so much that could be done? In reading Anthony Dunne and Fiona Raby’s excellent book, Speculative Everything, I have been inspired by their belief in the ability of art and design to affect future change. Creativity can empower us with the tool of speculation—the magical ability to peer into possible alternate realities using the combined forces of critical thinking and imagination. As Dunne and Raby write, “Speculating is based on imagination, the ability to literally imagine other worlds and alternatives.” Using what we know now, we can fly forward, creatively anticipating what might (or should) come to pass.

Working to articulate our hopes and fears for the future can be an informative and constructive exercise, especially if these hopes and fears work to catalyze action. “Probably the purest form of fictional world is the utopia . . . The idea of utopia is far more interesting when used as a stimulus to keep idealism alive, not as something to try to make real but as a reminder of the possibility of alternatives, as somewhere to aim for rather than build.” According to Dunne and Raby, being idealistic about how we hope the future could look can help us think concretely about where we should be aiming and focusing our efforts in the present. In the same way, imagining the future as a derailed, calamitous dystopia can also be useful. If we ignore warning signs and forge ahead without critiquing our existing behaviors in light of how they could evolve and dismantle us, there’s little hope for us as a species.

In many cases, works of science fiction function in a speculative sense by crafting distinctive narratives about strange new realities that could believably come to pass. The best sci-fi is haunting and thrilling because, while the plots are imaginative, we recognize the inherent behaviors and situations as familiar, as possible. While many sci-fi stories are created to be consumed as entertainment, it seems there is always a grain of truth to what they’re depicting—think 1984, 2001: A Space Odyssey, Her, Black Mirror, and even The X-Files. We read and watch and we digest the strangeness that could come to pass. In some cases we become impervious to these potential futures as the initial shock is absorbed and the horror fades to acceptance. But what if we were more accustomed to using fictional stories about the future to catalyze actual debate? To inspire action? To change the evolution of culture?

Inspired by the history of futurism and by a desire to create an antidote to our future-focused malaise, I have initiated Speculative Futurism, an experimental project asking participants to use concrete experiences and existing knowledge to theorize about what lies ahead. In line with past generations of future speculators, I believe we can put creative energy to good use by asking ourselves to imagine fictional yet possible alternate futures, as these conjectures then allow us a more tangible, concrete opportunity to take action in building the world we hope to inhabit.

Speculative Futurism is a creative critical thinking project manifesting in concise statements of fears and hopes for the future, using the Internet as a tool to catalyze and propel the conversation.

To set this project in motion, I invited a group of creative professionals—artists, writers, curators, technologists, publishers, and museum workers—to imagine two potential futures. In one, conditions have changed for the worse and our species is struggling; in the other, improvements have been made and circumstances are generally better than they are now. The original group of participants was invited to conceptualize these futures in any way that felt natural based on their experiences, either through the very specific lens of their creative profession, or on a grander scale that took the entire world into account. They were also invited to think of “the future” in whatever way made sense to them, be it a few months from now or a hundred years off. Either way, they would need to decide on a timeline and an approach to conceiving of “the future” as something concrete and imaginable rather than fundamentally abstract.

Using their imagined dystopian-ish and utopian-ish futures, each invited participant created two tweet-sized responses articulating his or her hopes and fears about where we’re heading. As you’ll notice if you read through the nearly 50 responses I collected (featured in this spread’s illustration), many of the collected hopes and fears share similar characteristics:

We FEAR the effect that technology will have on our creativity, individuality, and overall humanity. We worry that feelings of apathy will escalate to a point where we’re helpless to act on a number of issues, from preventing climate change to advocating for social justice and equality. We’re afraid that capitalism may run out of control in a future society where technology has brought us further away from worldwide equality. We’re fearful of the fate of the arts, and can imagine an unfortunate future where art and artists become irrelevant and obsolete. We’re worried that we’re a fundamentally selfish, lazy, and wasteful species, and that our dependency on technology will catalyze these characteristics in damning ways. If robots take our jobs and kill us off, we’re worried that it will still be our fault, too.

On a lighter note, we have high hopes. We can imagine great possibilities unfolding:

We HOPE that, deep down, we are benevolent creatures who will eventually work out a way to use technology to solve problems rather than create them. We aspire to bring access to quality education to everyone, and we can imagine a new era of enlightenment created by a society in which each and every human feels supported and embraced. In the ideal future, artists are intrinsically valued because their ability to generate creative ideas sets them apart from machines. Greed is abolished due to an abundance of clean resources. Open-source technologies help us create sustainable, shared solutions for clean energy, food, medicine, and shelter. When everyone is well taken care of, fights over power and control dwindle. We create a truly equitable and sustainable society. Humans and the world thrive.

While speculating about the future isn’t synonymous with affecting change for the future, I’m hopeful that the mere act of pinning down our hopes and fears can be empowering and useful. As H.G. Wells is known to have said, “The only true measure of success is the ratio between what we might have done and what we might have been on the one hand, and the thing we have made and the things we have made of ourselves on the other.” When we have something to look forward to, perhaps we will be more motivated to take the necessary steps towards creating a world where our hopes, rather than our fears, will flourish. 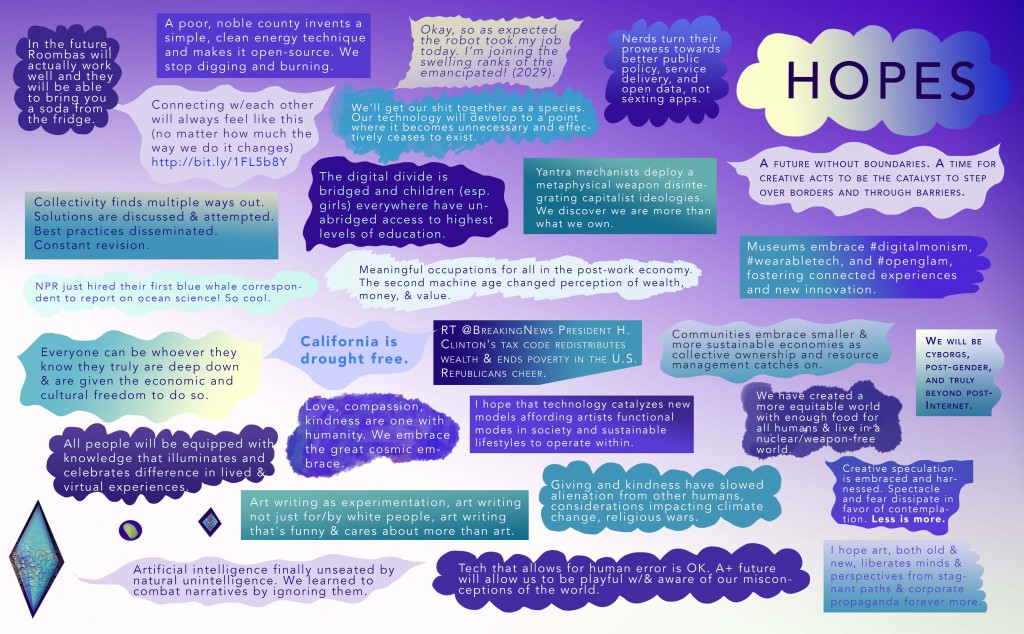 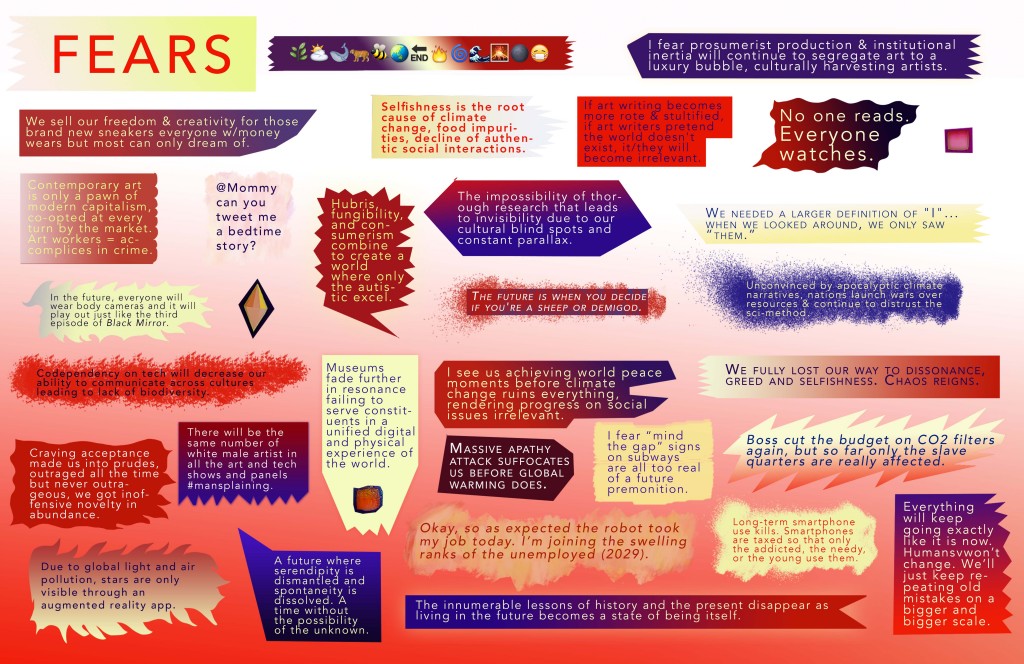 Next post João Mourão and Luis Silva, Curators Of Zona Maco Sur 2015: In Conversation With DFAQ 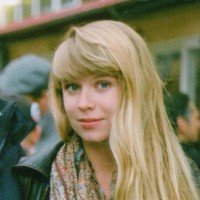 About the Author Willa Köerner

Willa Köerner is an artist, writer, curator, and creative strategist working to bring art and technology together in meaningful ways. Recently, she has worked as a found- ing member of Gray Area Art + Technology’s Cultural Incubator program, and on numerous art-focused, digital engagement projects for organizations such as The Smithsonian’s National Air and Space Museum, Electric Objects, and SFMOMA. In 2014, Willa spoke at SXSW on the Internet and social media’s affect on curatorial practice, and she looks forward to exploring this field further in a new curatorial position at Kickstarter. Willa has writ- ten for Art21, The Creators Project, Complex Magazine, and SFMOMA’s Open Space, to name a few. Her work has been noted in TIME, Mashable, The Creators Project, BLOUIN ArtInfo, and beyond. 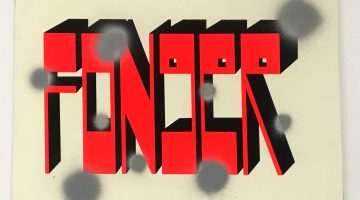 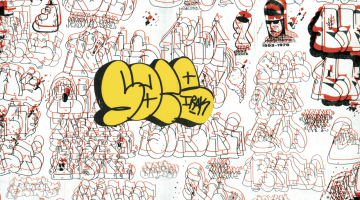