“This Island Earth” at Incline Gallery 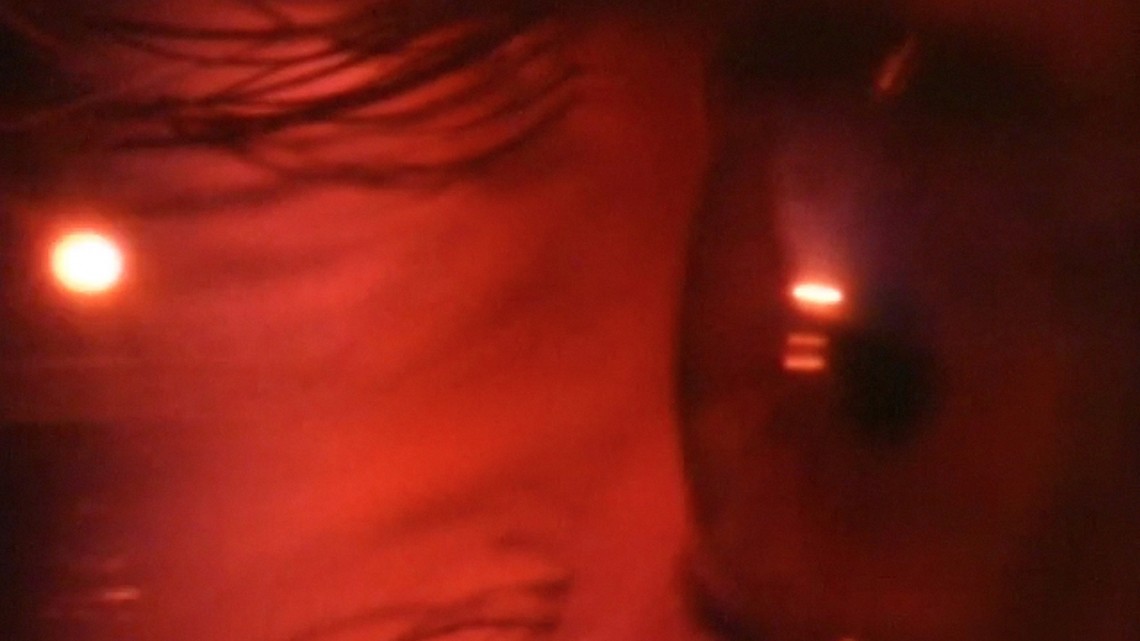 On view at Incline Gallery is a three-person show titled This Island Earth, featuring paintings by Alexander Cheves and Walter Logue, and film and collage by Paul Clipson. Incline Gallery is a narrow space with three ascending ramps—the works are hung along this path until you reach the top landing and a room closed by glass-paned doors. The show is far more complex than a quick look reveals. The work is minimal and could be overlooked as merely attractive or amusing, but further research uncovered extremely conceptual, poignant, and secretly linked connections. The thread between the three artists stitches through landscape, to language, to music and back to landscape again—each artist’s work visually playing off the other through abstract patterns and repetition.

Alexander Cheves’s paintings on panel feature repeated abstract shapes in subdued colors such as navy blue, gray, soft red, and dark cream. The abstract objects in the paintings allude to buildings, perhaps homes. As a whole, the collective structures create a wallpaper effect reminiscent of an aerial view of tract homes peppering a suburban landscape. One large painting is curiously titled february tan, which seems to epitomize California’s lack of winter and the ability to lie about in a park with no shirt on, as many often do in the Bay Area, Los Angeles, or San Diego (sorry East Coast). Cheves’s use of modularity and multiples emphasizes the inundation of commerce or industrialization that occupies the post-modern California where nature and humans intersect. Also on view are two small black sculptures that are shaped like the buildings similar to the ones in his paintings. The titles are poetic and personal, such as hold me you, and complement the curiously industrial yet intimate shapes. The piece is on a pedestal next to Walter Logues’s crass silkscreen panel proclaiming in all caps: “HEY LADY.” 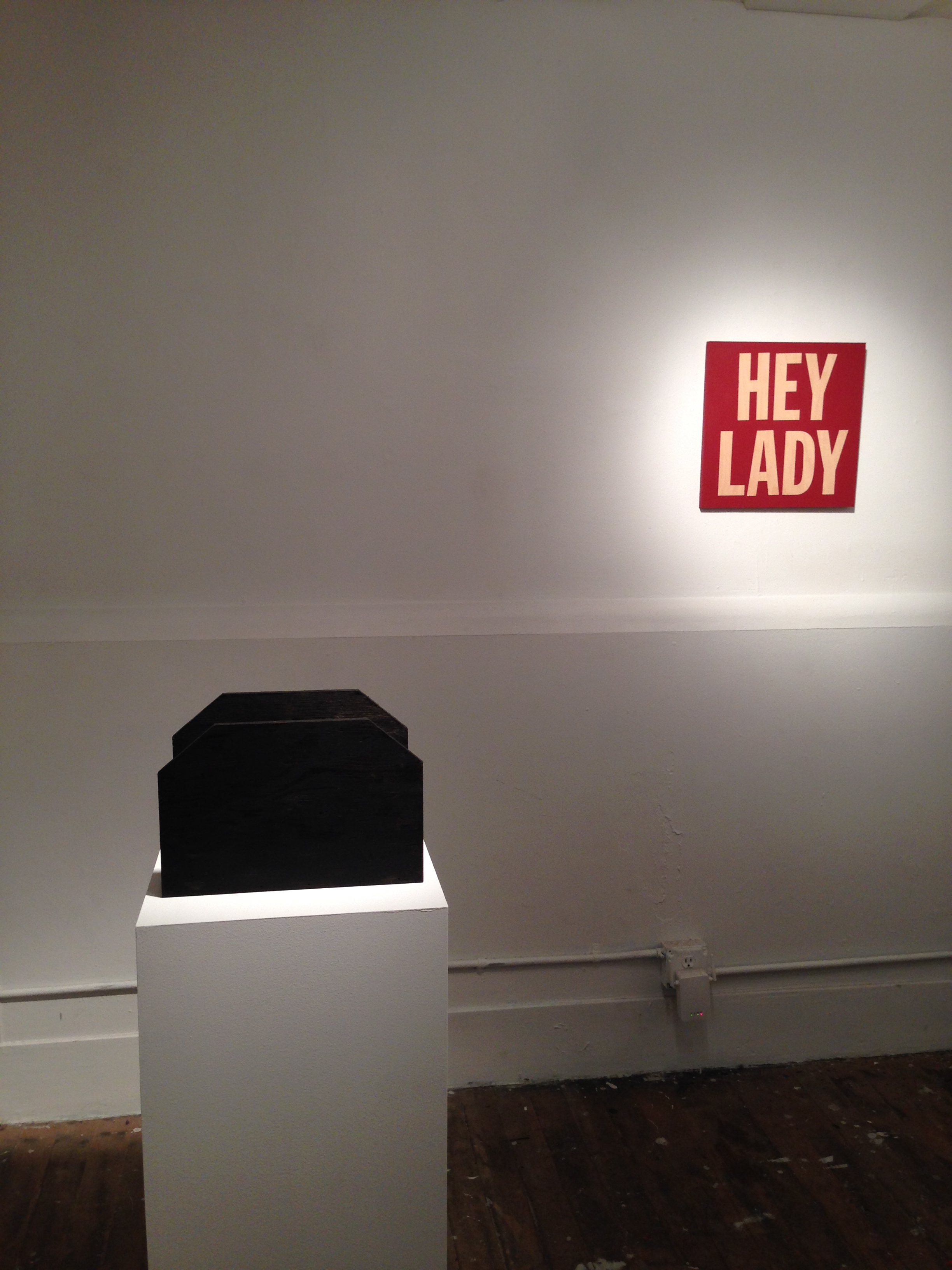 Shrouded in bittersweet humor with a dash of the absurd and the incomprehensible, Logues’s selection of works for the show were chosen for their emotional ties, and the ways in which they abstractly relate to one another. In a phone conversation with Logue, he explained that the overarching thread is repetition and patterns loosely and intuitively influenced by hip hop, Allen Ginsberg, and Samuel Beckett. In looking around the gallery, I think of Beckett’s lesser-known Watt here—a treatise of perpetual repetition, compulsively repeating words and phrases in a melodic cadence similar to music. For me, HEY LADY immediately conjured up the Beastie Boys song Hey Ladies. Although each piece has personal significance to Logue, he is open to the varietal meanings that language affords, changing with time and with each viewer’s own history that they bring to it. He mentioned that HEY LADY also references Jerry Lewis, whose campy and inappropriate humor spark a bit of consternation over the piece.

One piece in particular was very intriguing, yet hard to place without more background information: “DDA, DDA, DDA,” it reads. Logue explained that it is the repeated guitar chords in the song Roadrunner by the seminal 1970s no-wave/proto-punk band The Modern Lovers. 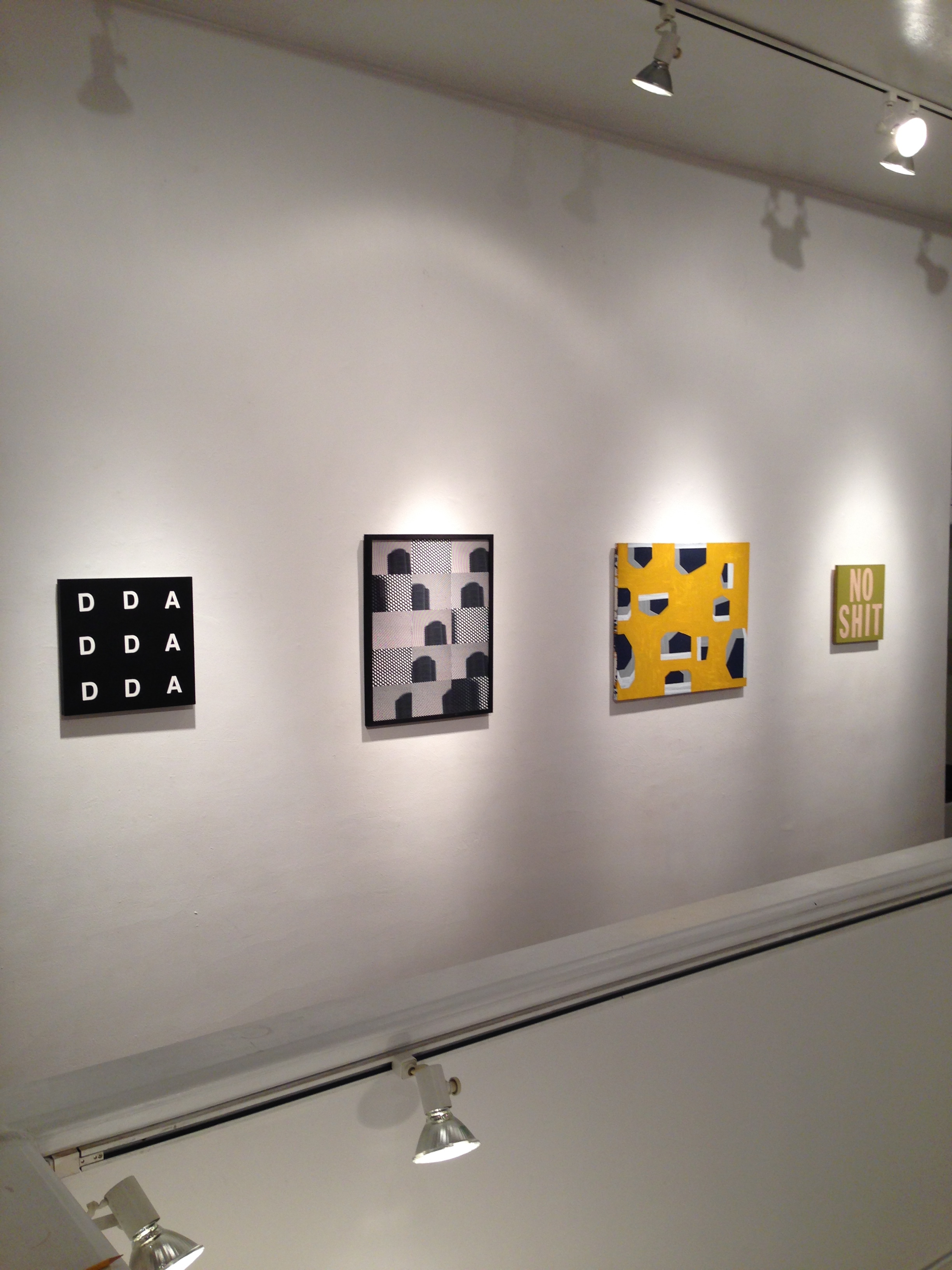 A quick search brought all the memories of that song back to me instantly. As a youth on the fringes of punk culture growing up in Los Angeles, cars and listening to the radio were a mainstay and part of one’s identity (RIP Daisy the 1969 Plymouth Swinger). The lyrics paint a very specific picture of the protagonist’s troubles eased by driving: “I’m in love with the radio on. It helps me from being alone late at night. It helps me from being lonely late at night. I don’t feel so bad now in the car. Don’t feel so alone, got the radio on.” Perhaps a version of this (at least in the Bay Area) would be more to the likes of not feeling alone on BART with earbuds in and a custom channel created in iTunes. The last refrain of the song is like a mantra down a deserted highway: “Radio On!” Again, the repetition, patterns, and music influences in his work come forward, if not at all readily or revealed outright but rather embedded in the codes that Logue presents. 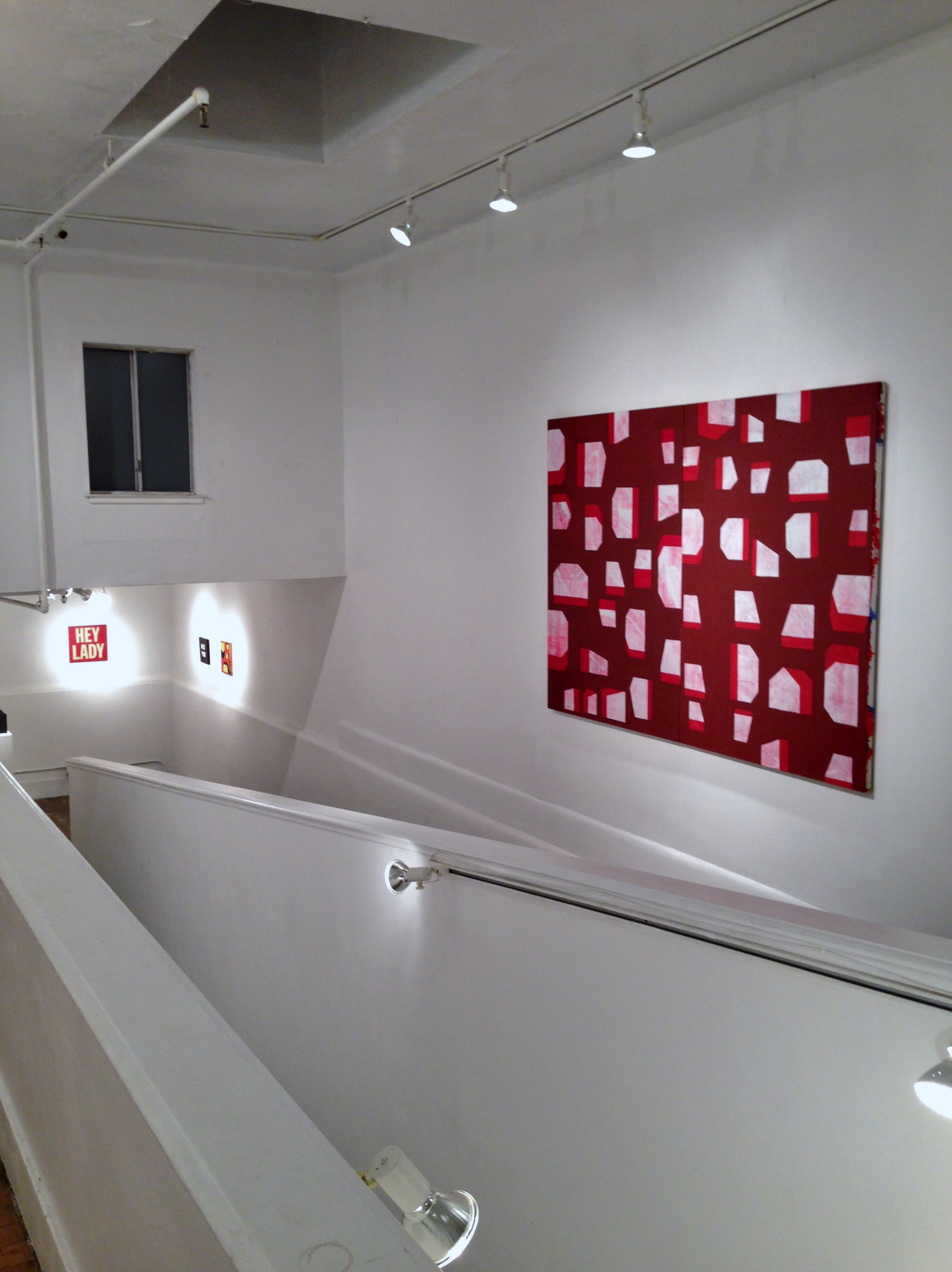 Paul Clipson is also heavily influenced by music. The three films that are on exhibit are each set to specific soundtracks. In fact, as Clipson noted in an email exchange, the films would not exist without the music since the work is actually based upon it. Pulsars E Quasars features music by ARP (Alexis Georgopoulos), with whom Clipson recently exhibited at Jack Hanley in New York. The film begins with an orange scene of a sun over the edge of the ocean which quickly beings flashing multiple, successive shots of abstracted water and sun rays. The lyrics remark on the sun and the space between fading lights. The beat and guitar effects echo that of psychedelic low-fi indie rock, matching a carefree and dreamlike sensibility. Sometimes silhouetted figures walking along the shore pass the screen, while drums and soft male harmonics, similar to those of the band Grizzly Bear, add to the nostalgia and poetry when the scene shifts to bright light streaks, as if the audience has left the shore for the city. As the patterns become more abstracted and oranges bleed in again we are reminded of the beginning—a place we can always return.

Clipson often performs films live with music accompaniment. On February 28th, he presented two 16mm films simultaneously projected on adjacent walls of the gallery while Ben Bracken and Ashley Bellouin performed a live, ambient instrumental piece, lasting approximately 45 minutes. As with all of his live work, Clipson did not title the piece. Instead, he allows for immediacy, ensuring spontaneity by not having the musicians study the work beforehand. “I find the chance synchronicities of live events and the surprises they offer much more exciting than having a preconceived plan in mind,” he explained. Clipson described this further as “the two forms of film and sound being in parallel states that flow alongside each other, rather than purposefully informing one or the other by intent.” As the films started, a high shrill tone filled the space. Using singing rods, Bracken and Bellouin walked through the space. As the floor is wooden, their footsteps and the creaks of the ramp in the gallery added clues to their movement. The ambient rustlings or sometimes audience members’ voices resonated; the audience became inadvertent yet totally expected and accepted performers.

Performance by Ashley Boullin and Ben Bracken in conjunction with the film “Pulsars E Quasars” by Paul Clipson at Incline Gallery. Image courtesy of Mark Wilson.

Here, film takes on temporary dimensionality and alternate forms, bisecting space to paint the wall. Conversely, painting becomes three-dimensional through annotated music, implied speech, and constructed buildings. These presented landscapes and storyline scenarios are all worth inhabiting because they, as the title of the show suggests, remind us that the Earth and we humans are mere specks in something larger.