A Freight Train to Depersonalize Objects 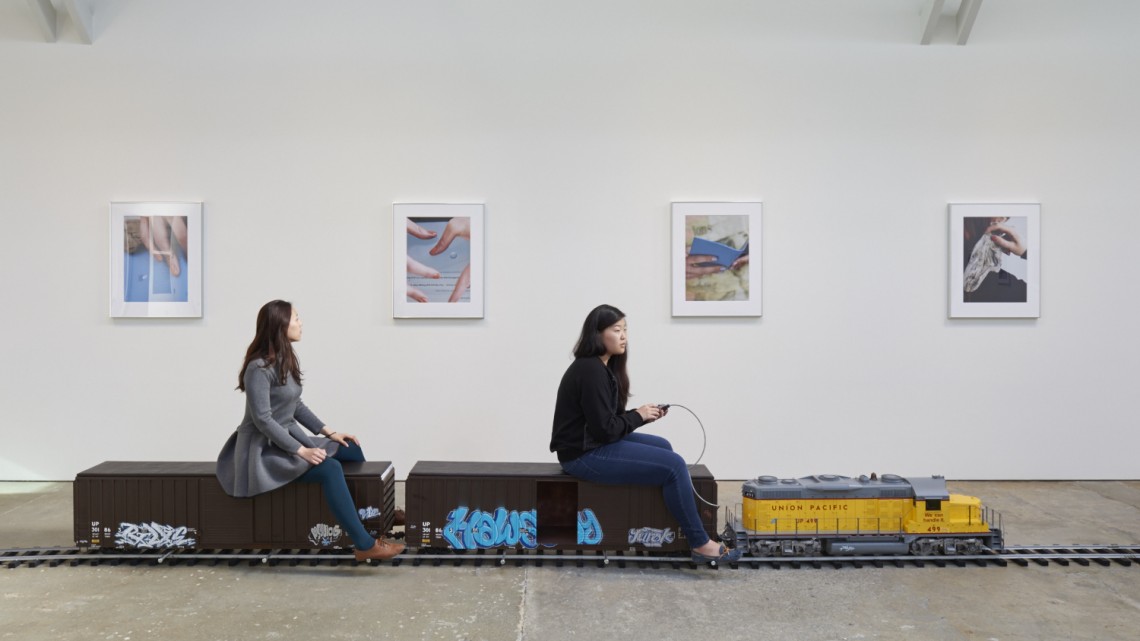 There is a slow buzz of satire throughout Josephine Pryde’s solo exhibition at the Wattis Institute of Contemporary Arts. Rather than attempting to take the work in as a whole, each photograph requires a lingering study, one by one, in order to notice the humor gurgling to the surface, lest the works be easily dismissed as diaristic. What better way to do this than to ride on a tiny freight-train! Seemingly a gimmick at first, this wholly necessary activity is offered up for viewers: ride a little train to view the photos alongside the track. Made by Backyard Train Company specifically for the exhibition, it is an exact scale model of a Union Pacific livery train and is appointed with hand-painted railcar graffiti, also in miniature. Dubiously approaching the cars and gingerly stepping over the tracks, one can’t help but smile at the thing, which inevitably must bring nostalgic memory to many. Symbolically rich with metaphor, the train is ultimately a carrier, and in this case its cargo is the gallery-goer. There are no choices of where to go, and the view is preselected. As the title of the exhibition suggests, lapses in Thinking By the person I Am, one is confronted with not only typographical fragmentation, but also disconcertion for placing the work together with the train in some kind of logical context; by using the story of her body and objects that she interacts with, Pryde literally derails the misconceived notion that we are what we own. 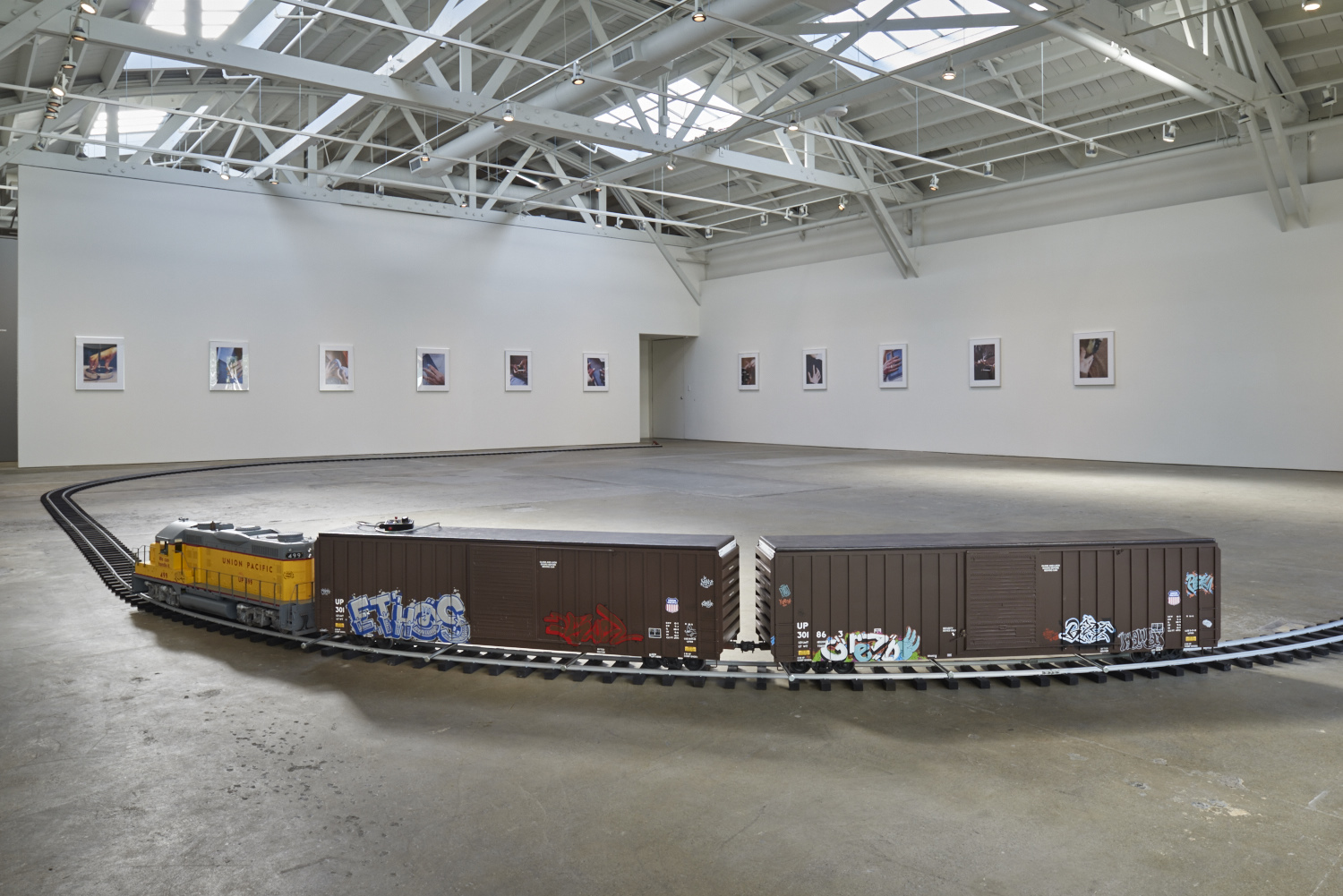 Throughout the works, the hands are the main feature, and each scenario is photographed with careful lighting and just the right amount of hyper focus to add a sense of intimacy and closeness. In all cases, the fingernails are perfectly manicured with colorful lacquer such as orange, blue, or metallic silver. The playful nails add to the youthfulness of the hands and the carefree and casual presence, as if alluding to a target advertising market. In some cases, the hands interact with objects, touching them or holding them close in gestures of practicality and of ownership or possession. In a few images, the hands are making gestures toward the body, but there are no objects present. In these instances, the hands themselves remain as the focal subject of the scene portrayed—portraits without a face. The hands become the speakers for the subject—their gestures referencing the self, pointing at the face or pressing against the chest as if to say, “I” or “Me”. 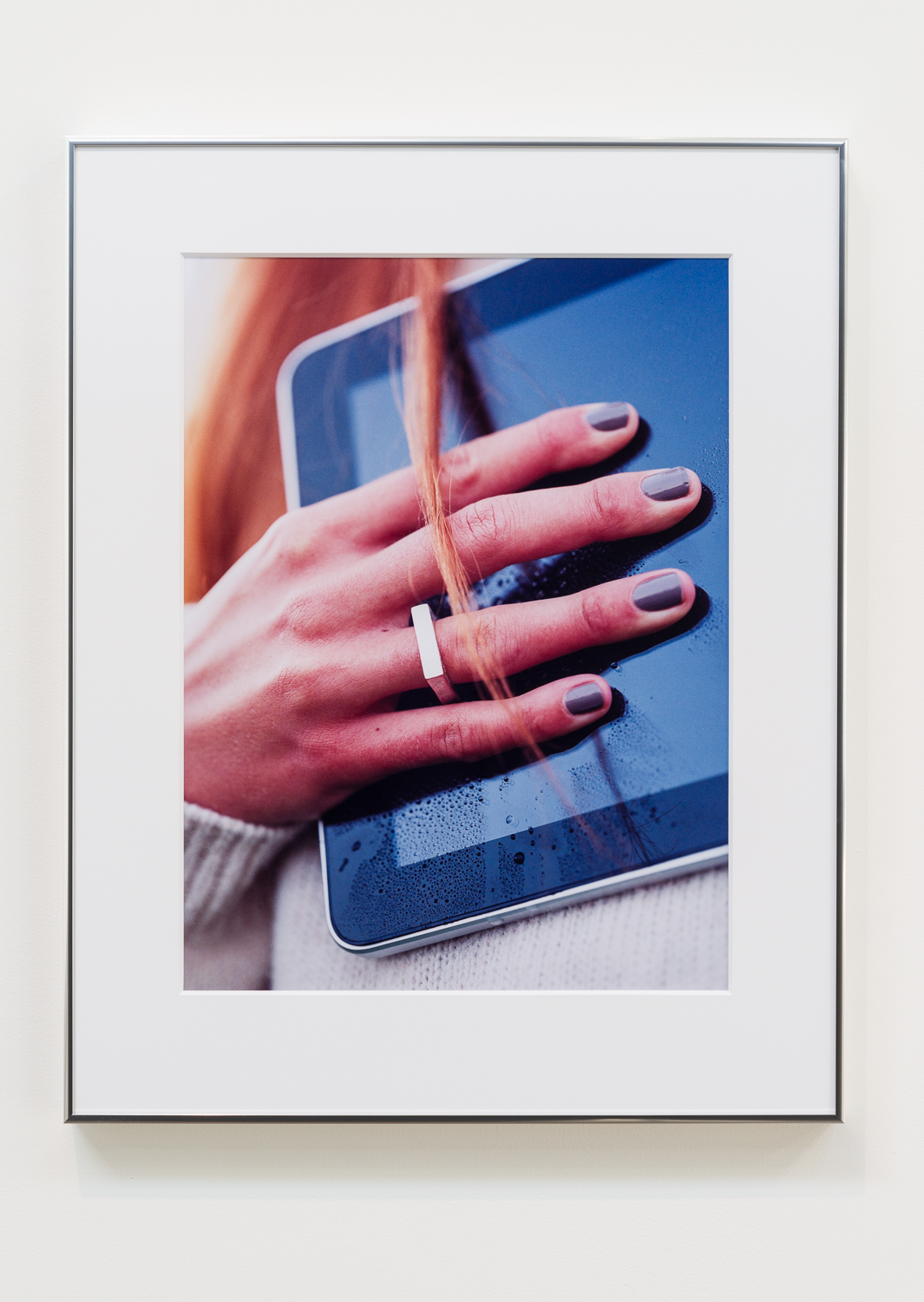 Of the photos that do contain objects, they present everyday items, be they man-made or natural: iPads, cell phones, and other more analog communication devices, such as small notebooks, including a light blue one with the artist’s initials “JP” embossed in silver. The brochure for the exhibition informs visitors that some of the items were given to Pryde as Christmas gifts by her gallerists, totaling four very similar presents given for two consecutive years. There is a doubling of meaning within the images—the objects seem to appear as advertisements for the very products that were previously purchased as gifts—the gift again for sale as the subject of the photographs. Next, their meaning is then inserted into the artwork, which seems to be in turn making a statement about the artists’ role as a commodity for the gallery. Knowing that the items are gifts given to Pryde, her acknowledgment and use of them is akin to a kind of anonymous self-portraiture that attempts to disassociate the artist as the subject of the works. 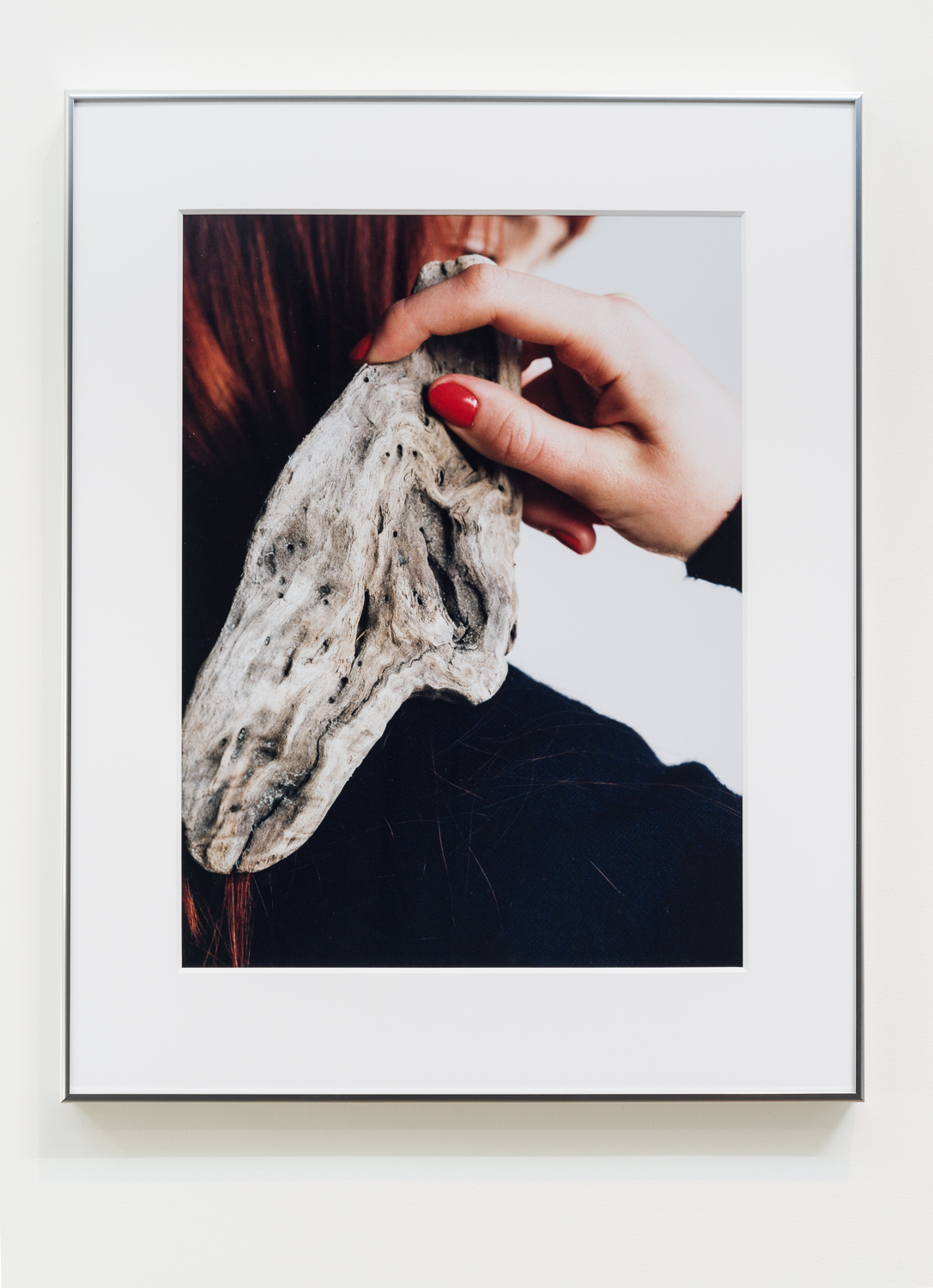 In other photographs, the hands are interacting with natural objects, such as a pinecone or a piece of driftwood. The gestures in these examples impart an awkward tenderness and curiosity for the things that the hands are holding or interacting with. In Gift Für Mich, Galerie Neu Christmas 2014 (1) a piece of driftwood is held resting on the right shoulder of a body wearing a black turtleneck sweater. In a related image of the same title, the hand pointing toward the face clarifies that the gift was perhaps the turtleneck itself. But the question remains whether or not the gift was the piece of driftwood—which seems like an utterly sentimental item gathered from a vacation—or perhaps it is both the turtleneck and the driftwood? Suddenly, all of the images become part of a strange world where reality and fiction are unclear. 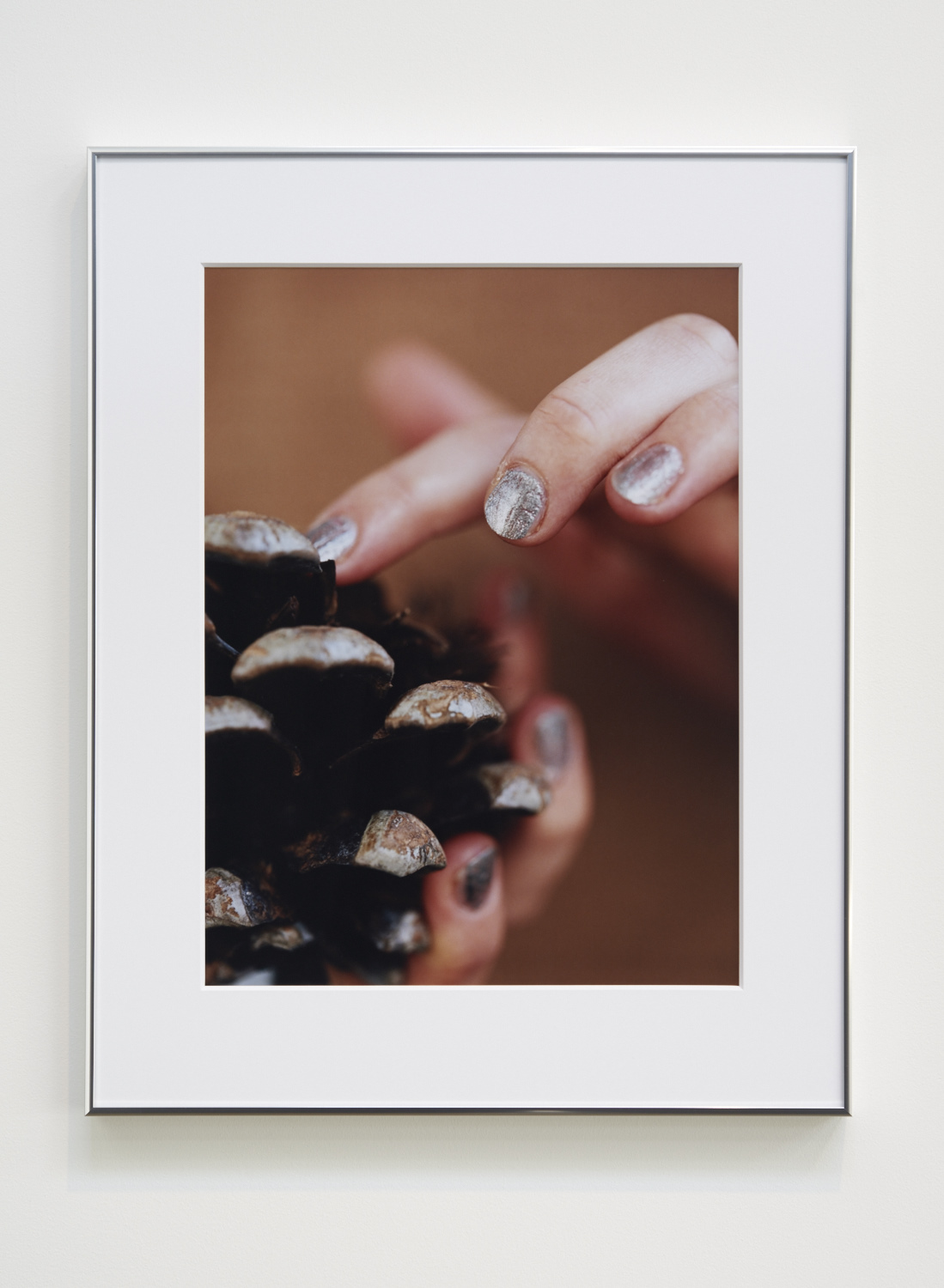 However, the images are not as illusory as the small ride-able train that is installed in the gallery, which sits idling, emanating an electronic engine-sound. The track for the train is an oblong U-shape (the ends are not joined). Viewers are allowed to ride on the train with a gallery attendant manning the controls. To begin, the train sends out a few hoots. As viewers ride on the train, with their feet on sturdy pegs, they slowly glide by the images. The feeling is that of riding on a Disneyland tour or visiting an historically preserved town like Bodie, yet there is no announcer explaining the display or adding factual quips along the way. The train slowly lingers at some images and then accelerates slightly near others. The pace directs the viewers’ perspective to begin to create a relationship with the passing images even though they are not installed in any specific linear order. At the end of the track, the train is put in reverse. Most unsettling is the gaze across the big gallery room as the train curves and the far wall suddenly feels as if it is receding away. The backward motion is unnatural, in cohesion with the strange hyper-reality of the hand-gestures in the photographs. On the one hand (no pun intended) the train is a metaphor for time, but on the other, it is a physical tool for the manifestation of looking. The room becomes a vivid exploration for viewers to reconsider their relationship to things they observe or own, which in reality is quite personal.
Tags: Christmas giftscommoditygestureintimacymaterialismmodel trainnail polishownershipphotographyportraituresatiretrain graffiti 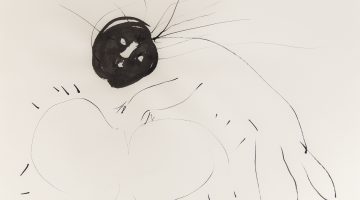