The Line Between Personality and Artist: Yoko Ono’s One Woman Show 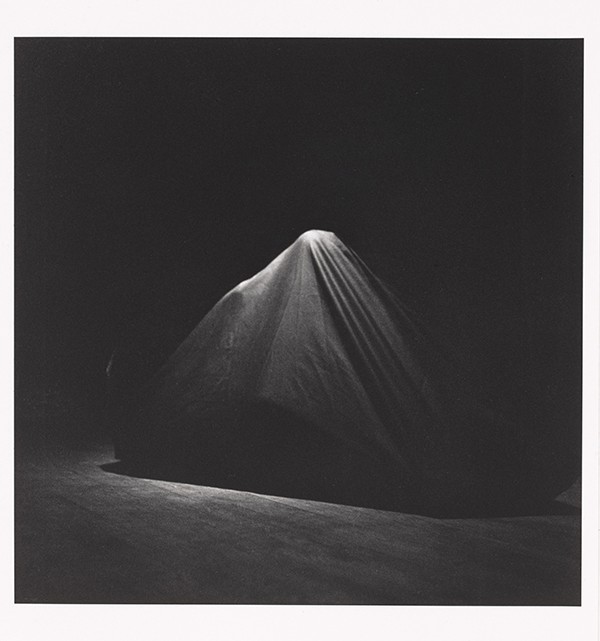 Yoko Ono: One Woman Show (1960-1971) is an opportunity for the Museum of Modern Art to play off of a cute anecdote from 1971, when the artist staged a work titled Museum of Modern (F)art, an unauthorized conceptual piece placed outside of the museum. 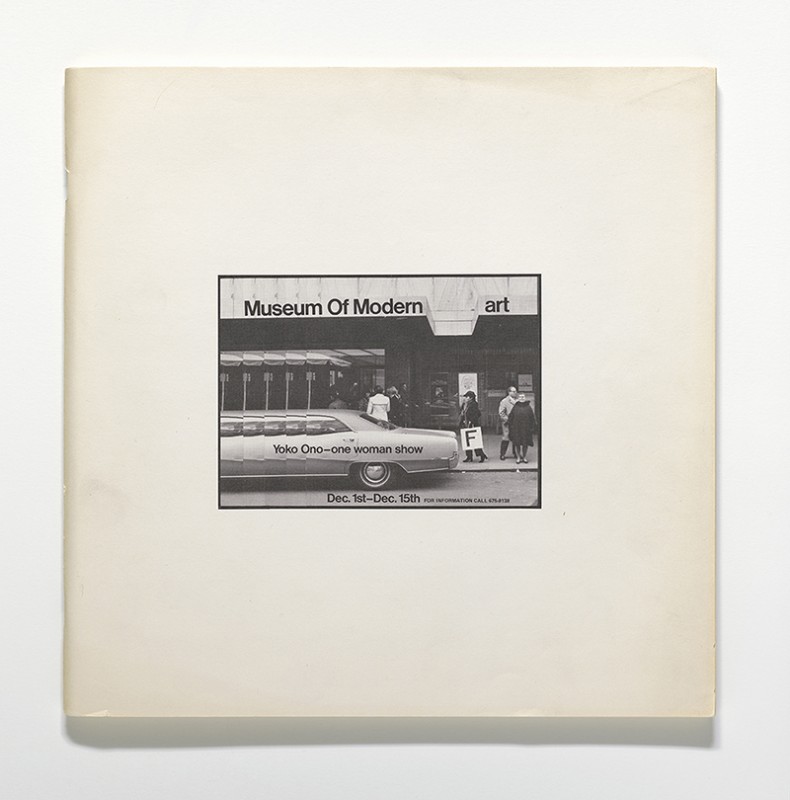 One Woman Show presents the works by order of where and how they were shown. We start by reading about the “happenings” she would host at her Chambers Street Loft (which she did not part take in, but met the likes of John Cage, Robert Morris etc.), to her first solo show in 1961 at Ag Gallery on the Upper East Side, to the 1962 Tokyo Sõgetsu Art Center exhibition and so on.  The viewer is reminded several times by wall text of the 1971 Museum of Modern (F)art piece, during which viewers were greeted outside by a man wearing a sandwich board saying that Ono had released flies on the museum grounds and was inviting the viewers to track them.  This performance outside of the museum was perhaps institutional criticism, but Ono’s intentions aren’t intelligible, and for this reason, the institutional contextualization of Yoko Ono with One Woman Show is based on a wobbly foundation. 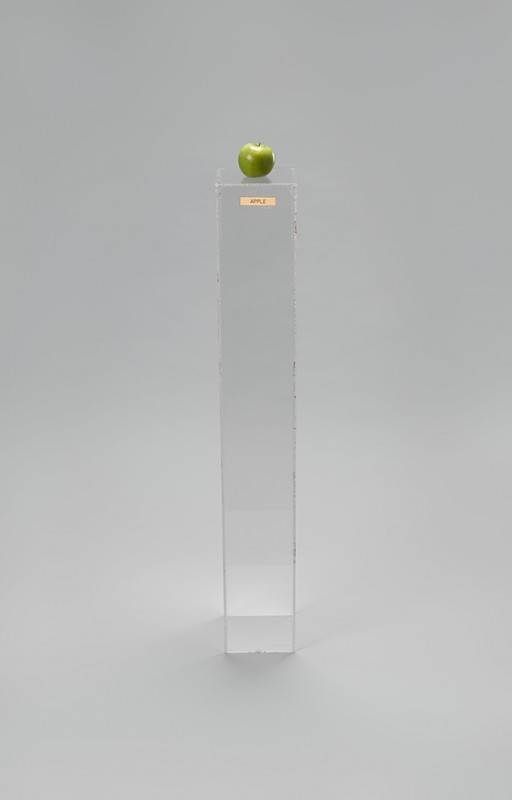 The first piece presented in the exhibition is Apple (1966), which is comprised of a single apple placed on top of a Plexiglas pedestal, including a plaque that says “Apple.” As the apple disintegrates with time it must be replaced by the museum staff—reminiscent of the value of transience, present within the wabi-sabi tradition. There were a few more Plexiglas containers, such as for Three Spoons (1967), inside of which were placed four “western-style” shiny silver spoons. 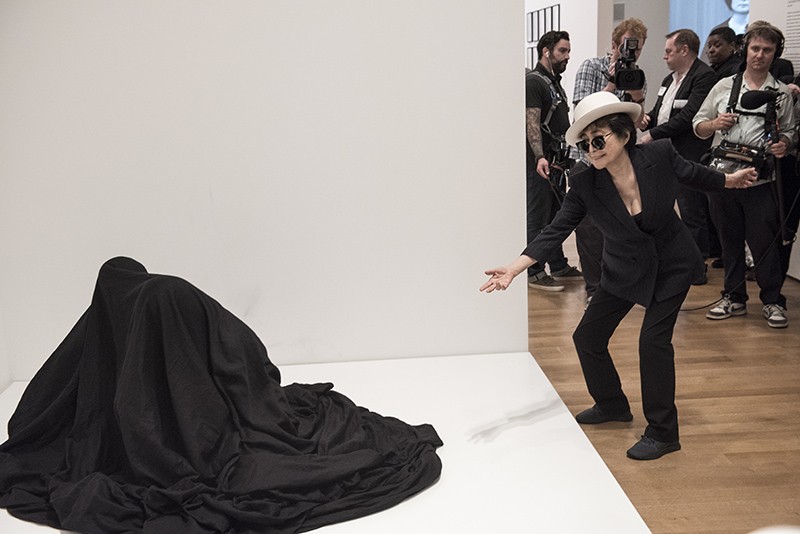 Although nuanced with poetic placements of objects and an homage to her Japanese roots, Ono’s main concern seems to be the framing of an exhibition (the pedestal, the title, the museum plaque.) One can’t help but notice, again, a potential interest in institutional critique and think of artists such as Marcel Broodthaers and Marcel Duchamp. But as Ono seems also to mock these framing devices, she nonetheless uses them as tools to document actions and to crystallize them into objects. The framing of Yoko Ono as an artist also holds a big role, almost too big as it seems to be justifying the very exhibition. In addition to being organized by chronological exhibitions and happenings, posters such as WAR IS OVER! if you want it (1969)—made with John Lennon—and exhibition posters are scattered throughout the exhibition. 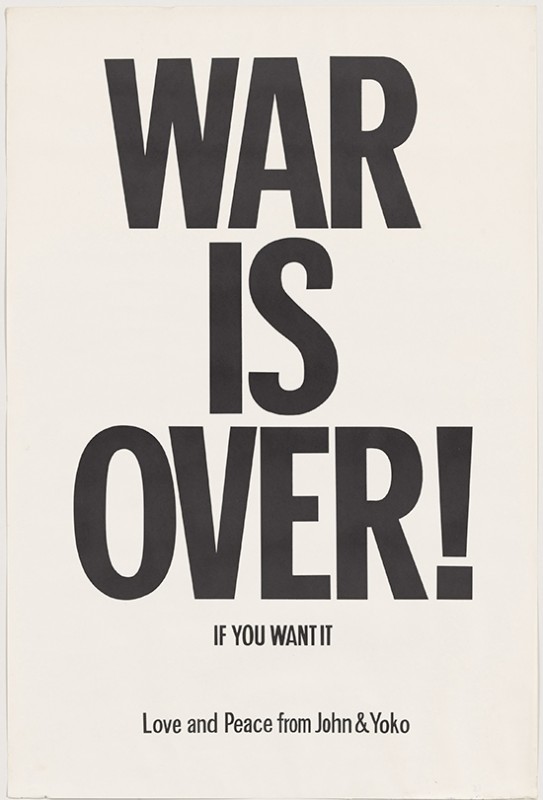 When speaking of Japanese music, Jun’ichirō Tanizaki, the author of the famous 1933 book on Japanese aesthetics, In Praise of Shadows, calls it “a music of reticence, of atmosphere,” its most important attribute being “all the pauses.” This brings to mind John Cage’s 1953 piece titled 4’33”: a duration of 4 minutes and 33 seconds during which the performer does absolutely nothing, allowing the audience to absorb the sounds around them. Cage attributes his own exploration of silence to the discovery of Robert Rauschenberg’s White Painting [three panel] (1951), which he claimed were mirrors of the air: receptacles for the world and everything within it. In the 1960s, Ono created Sky Machine (1961-66), a stainless steel dispenser, which releases hand written cards by the artist bearing the word “sky,” intended to be placed on the streets of New York. For the current MoMA exhibition, Ono created a spiral staircase, To See the Sky (2015), which leads to a skylight, in an attempt to show viewers something they’ve never seen before.

There is no doubt that Yoko Ono, as a human being, critiques capitalism, the Vietnam war (by celebrating spiritual repose), and maybe even the museum institution, however, is it unclear whether her work does. This indecisiveness obscures the content of the artworks and only sheds light on its author who, by spreading herself very thin, showcases watered-down ideas from the political climate of the 60s and 70s. 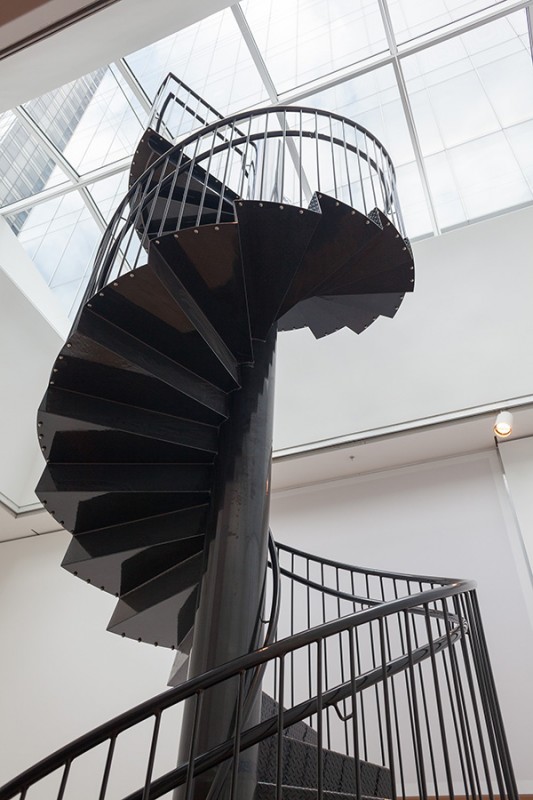 Next post Tauba Auerbach: In Conversation With Jordan Stein