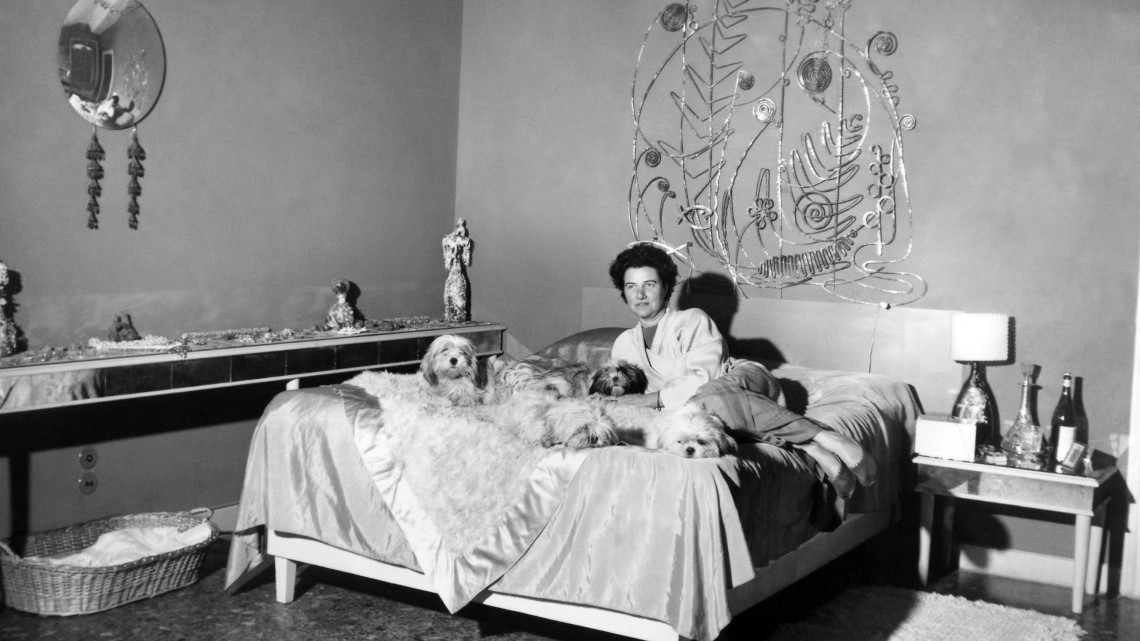 Peggy Guggenheim: Art Addict (2015) screened at the Vancouver International Film Festival to a sold-out audience. Many may know the director, Lisa Immordino Vreeland, for her work co-directing Diana Vreeland: The Eye Has to Travel (2011), about the fashion editor and icon (and her grandmother-in-law), but her solo-directorial debut is, to what would have been the dismay of Vreeland, a bit lacklustre.

Guggenheim’s life is portrayed from before childhood, as the chronology of her story begins with an explanation of the origins of her wealth, a combination of mining and banking. After the death of her father, who was onboard the Titanic in 1919, she identified as an outsider, and to the chagrin of her upper class family, began to work in an avant-garde bookstore in Manhattan—of course it was the “working” part that shocks, not necessarily the job itself. Eventually, she went to Europe to have a kind of cultural rebirth, where she met her first husband, Laurence Vail. This followed with an inheritance, which kick-started her art collecting and various galleries: Guggenheim Jeune in London, Art of This Century in New York, and lastly, her return to Europe and the beginnings of her house museum in Venice, the Palazzo Venier dei Leoni.

Art Addict’s primary draw is the use of recently uncovered audio between Guggenheim and her biographer Jacqueline Bograd Weld from 1978/9. It chimes in atop archival material and between interviews with living artists, curators, gallerists and collectors like Larry Gagosian and Marina Abramović. While in The Eye… Vreeland’s recorded conversation with the editor of her memoir DV, George Plimpton, was affectionate and of course dominated by her flamboyant recollection, Bograd Weld’s questions were journalistic and probing, making the dialogue a bit wooden. However, Guggenheim delivered answers with wit and her legendary candour, especially when she spoke about artists. Describing Brancusi’s disposition as half-god, half peasant while admitting she courted him to get a better price on Bird in Space, garnered chuckles from the audiences.

To compare the personalities of Vreeland and Guggenheim would shed little light into why Art Addict sparkles less and frustrates more than The Eye Has to Travel, but it may have to do with the baggage of excess commentary in the former. A handful of talking heads could have been left on the editing room floor at no expense to the degree of insight the documentary gives to into Guggenheim’s life, specifically the twenty seconds of the fast-talking, over-productive, Hans Ulrich Obrist essentially saying “She’s great”. Simply negligible. Though, on the contrary, an aspect of the film that is superlative, but likely to be overlooked, is the comprehensive array of Guggenheim Jeune exhibition ephemera that are likely only accessible through special archives or collections. All the elegantly conceived typography that gave Guggenheim Jeune a quintessential Modern identity was the the design prowess of Wyn Henderson, her gallery assistant and registrar, who was a typographer by profession.[1] 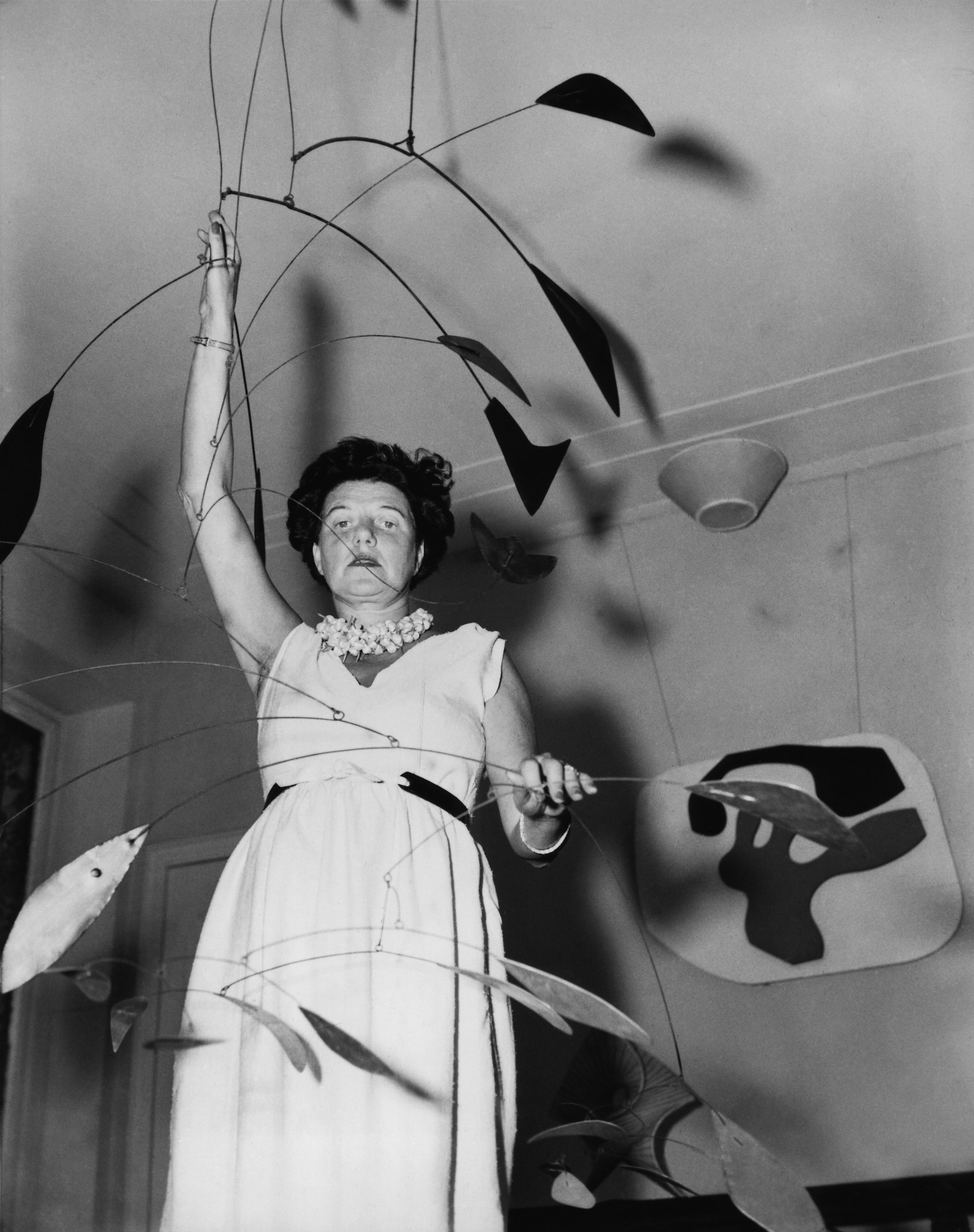 Peggy Guggenheim was a self proclaimed art addict. It dictated her finances, as much as it did her romances. To say that Peggy Guggenheim was plagued by her sexual exploits simply would not be true or fair, but it would not be far off to say that it plagues her legacy. It would seem that her major contributions to the triumph of Modern Art is historically perceived to be on par with her affairs with Modernists. Though likely responding in jest, when one interviewee was asked what he would ask Guggenheim if she were alive now, he answered that he would like to know “how was Beckett in bed?” to which the answer I’m sure she would answer candidly and enlighten us for all of a single hot minute.

It is not until nearly the end of the film does Immordino Vreeland give short attention to one of the least explored parts of her legacy as an art patron, after a segment on Jackson Pollock, it is mentioned that she also gave an allowance to Djuna Barnes, which in turn allowed her to produce Nightwood. Although prior to the second world war, she continued to give salaries for many artists, which partially prevented her from opening a museum of modern art in London before the outbreak of the war, during which she paid for the passage of a number of European artists to emigrate to New York including André Breton and his family, and Max Ernst (whom she later married).

Guggenheim’s most unique characteristic as a collector was that she sincerely wanted to help artists, naively at times, and mostly at her expense, and to her reputation at times. When she tried to sell a Kandinsky to her uncle Solomon, she was accused in a letter of being distasteful and “propagating in mediocrity, if not trash” by the museum’s curator, Baroness Rebay, who was also a nemesis of sorts to Guggenheim.

However, footage of Guggenheim handling the first sculpture she ever purchased, an Hans Arp bronze sculpture, says more about her relationship to art than a parade of well-known figures from early 20th century avant-garde Paris and mid-century modernist New York—nothing far off of opening a modern art history textbook. In this sense, this film would more likely suit and enrich audiences in an art history lecture hall in order to illustrate context and coterie more than for the critical appetite of those who mill around the festival circuit.

A friend of mine, regarding an aversion to documentaries, commented that they were too much like an “adult story time,” which is true of “Art Addict”. My expectation of documentaries is that they should surpass general knowledge, fulfill gaps in history, not reinforce mythologies or consensus, or conflate a woman’s devotion of art with how she chose to enjoy the men of art.

Now, to counterbalance, what we need is a well-done Marcia Tucker documentary.

Next post A selection of current exhibitions, Los Angeles