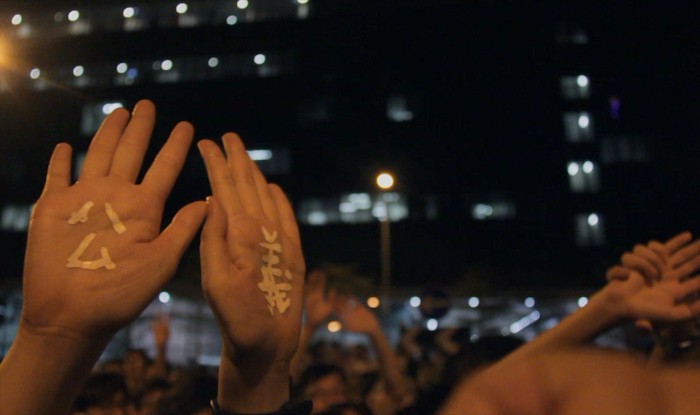 “If our understanding of protest camps was left to the wild and often violent imagination of the mainstream media, protest camps would likely be seen as obstructive and illegal nests chock-full of ‘die-hard’ activists.” -Anna Feigenbaum, Fabian Frenzel & Patrick McCurdy, introduction to Protest Camps (2013)

In the fall of September 2014, a crowd of mostly young Hong Kong citizens gathered to protest new restrictions on the 2017 election of their chief executive, which stipulated that nominees would be screened and pre-approved by a committee of Beijing loyalists. Student leaders assembled outside of government buildings and staged class-boycotts to demonstrate this violation to their right to universal suffrage—the right to vote for a candidate under the proper democratic conditions promised for this particular election cycle since the handing over of Hong Kong from the United Kingdom to the People’s Republic of China in 1997. 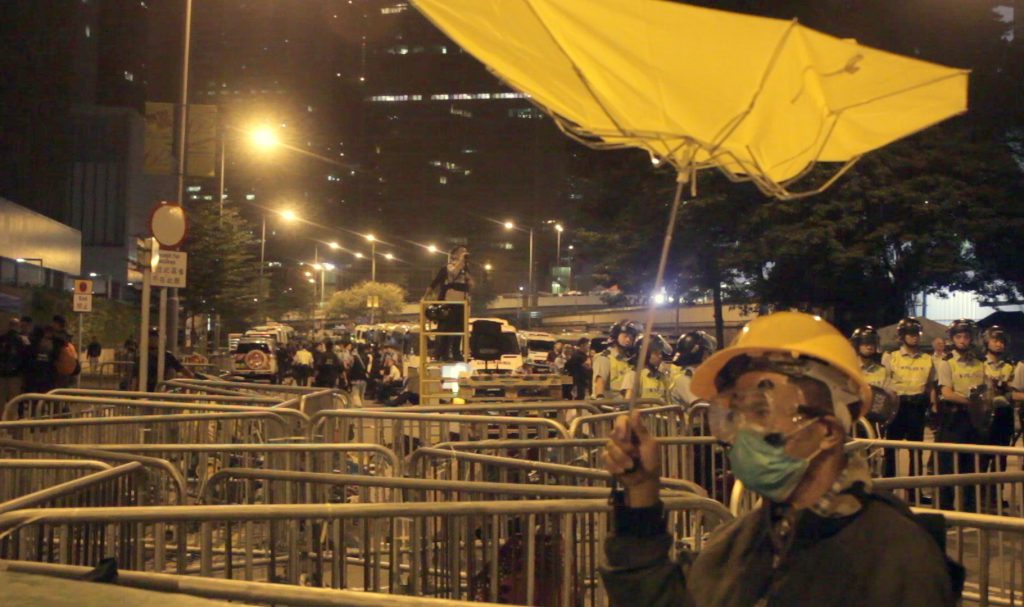 The film begins with student activists linking arms and standing before the police in a nonviolent occupation. Director, Chan Tze-woon arrived at the first evening of protests on September 27th, 2014 with his Canon 50D and shot over 1000 hours of footage. He captured organized, high-functioning individuals in their early twenties who surrendered the leisurely youth culture of anxious socializing, buying shit, and cursory existentialism in favor of what is repeatedly demanded for throughout the film: universal suffrage. Though their cumulative action can be viewed as an epic and historic display of youth solidarity, and protest spectacle in the vein of Occupy Wall Street, Chan manages to portray the pedestrian day-to-day labor and necessary conviviality required to sustain its participants and maintain the potency of large scale political action.

In mainstream press across the globe, student protest and youth culture movements are often framed as idealistic rabble or are infantilized as “rebellious,” but what motivates civil disobedience cannot be chalked up to attitude problems or recreational subordination. Yellowing is a literal document that verifies the emptiness of this assumption. With nothing more than his handheld camera, Chan recorded the swift organization and compelling energy of youth emboldened in the streets of Hong Kong. The young people in this film are captured at that point in one’s life when you have a lot of energy and refusal, and what can happen when that energy is called upon or aggravated by a violation of civic rights. 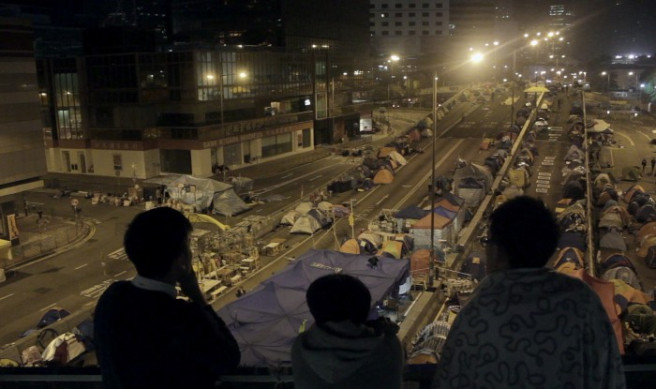 The most striking element of this film is the culture of care between what were initially relative strangers. Chan studied policy making and administration before receiving a master’s degree in film production from City University Hong Kong and Baptist University, respectively, but he had no previous association with the Occupy Central and Umbrella Movements. Throughout the film, people would arrive at the site of the occupation and ask, how can I help? Give us a hand putting up this tent, fix this leak, or can you teach English? Have an umbrella, a cooling pack, a face mask, Pocari Sweat? One of the main protagonists of the film, known as Big Rachel, is seen perched on the curb, finishing her readings for class the following morning. One of her companions, who was advised by his tutors to become a farmer, learns from her what anthropology is during a casual conversation that took place before Chan’s camera. Another frequently seen student, known as Egg, celebrated his birthday on the site of the occupation. They build tents, hand out supplies, fix leaks, and goad each other on to speak to their crushes.

As the film progresses, the occupation increasingly evolves into what resembles an alternative campus. A covered area is cordoned off as a study area where protesters can find a spot at a table and complete their homework. English lessons are held when tutors are present, and there are designated spots where water, food, sleeping mats, and medical aid can be dispensed. 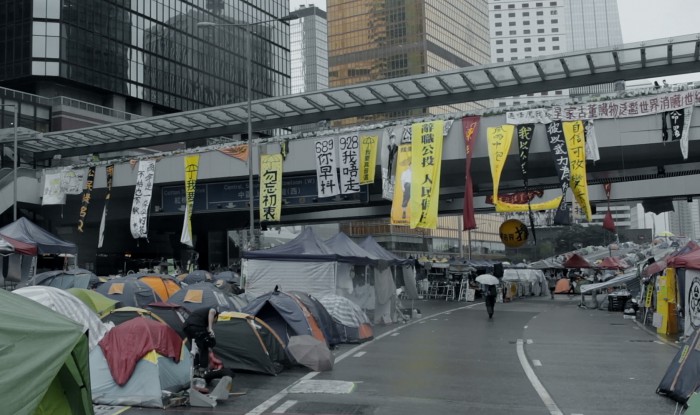 At one point in the film, a 14-year-old girl arrives to attend a protest that later escalated violently. A group of leaders gather to greet her, as well as debrief her about safety precautions and to prepare for the possibility that she may be arrested. They ask her what her parents think about her being there, and she says they had an argument, but they understand. At another point, Egg speaks to a young boy. They seem to have rapport. Egg shares advice about the importance of asking questions; if your mother tells you that someone with a tattoo is bad, remember to ask why, or to establish your own reasons to support that notion—in other words, don’t believe everything you are told. He then reveals a small tattoo on his own arm. The boy has a playful freak out and declares, “you’re bad!” to Egg, but the lesson is more or less solidified with a high-five. 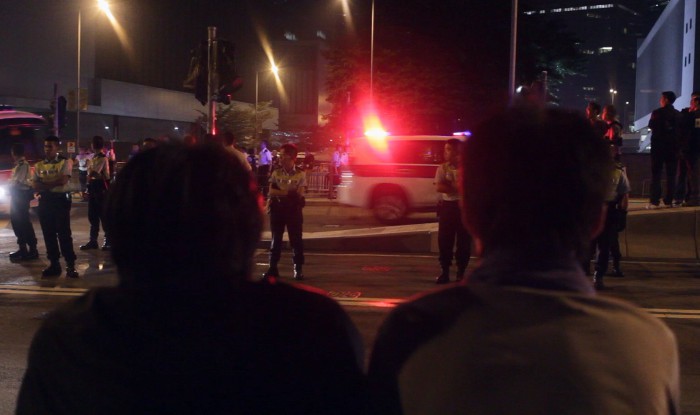 Chan’s documented image of young people in solidarity impacts you in unannounced ways. Against the dominant media image of entitled and narcissistic millennials, or the headlines made by the rise of a nouveau riche Chinese elite, candid displays of compassion, resolve and collectivity is kind of something to behold. Even moments of in-fighting are settled by level-headed leaders, and a general vote, which is the extent of their bureaucracy.

One might emerge from the cinema feeling, as they say, woke, but the inefficacy of this term is exemplary because Chan does not deviate from the act of purely documenting a small group and their respective activities during in the protest camp. The political climate of Hong Kong comes with a long backstory. Conversations between the students remarking on their parents, their teachers, and schools give viewers a glimpse into what fuels their frustrations. If official cinemas are hesitant to screen Yellowing because it might be considered pro-democracy (or anti-Beijing) propaganda, they are misguided because the film is not that effective. For someone who is not well acquainted with the political context and events that sparked the occupation, do not expect a list of turning points or reflexive analysis of the movement—as this can only come with historical distance and the movement is very much in full swing. As the struggle for universal suffrage continues, student leaders have been elected into the legislative council, performing an iconoclastic swearing in, a bookseller has been kidnapped, and Hong Kong separatists have also entered the fray of the debate. 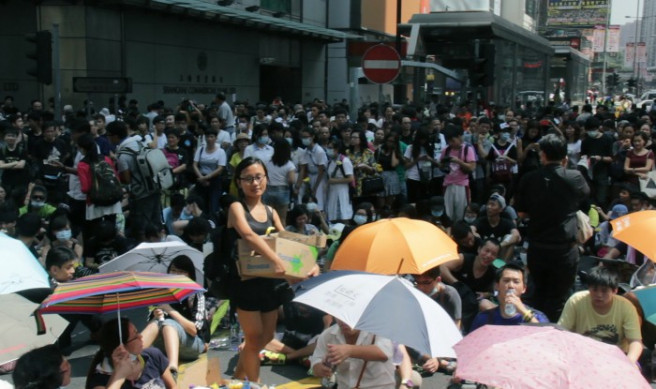 For last year’s Vancouver International Film Festival, I reviewed Lisa Immordino-Vreeland’s documentary Peggy Guggenheim: Art Addict, concluding that that this and so many other documentaries that circulate film festivals are presented as “storytime for adults.” Almost like extended commercials for persons of interest, or things of note. Before attending the screening of Yellowing, I was hesitant to write about another documentary. Edmund Lee of the South China Morning Post called Yellowing a “conventional” film, but in my experience, a conventional documentary is linear, tidy, a bit of a primer on the subject, and destined to become a go-to for a lecturer without a lesson plan. But as “conventional” political documentaries go, Yellowing has no overarching conclusions about capitalism, or general statements of terribleness, no talking heads with expert opinions—in short, no “adult story time.” 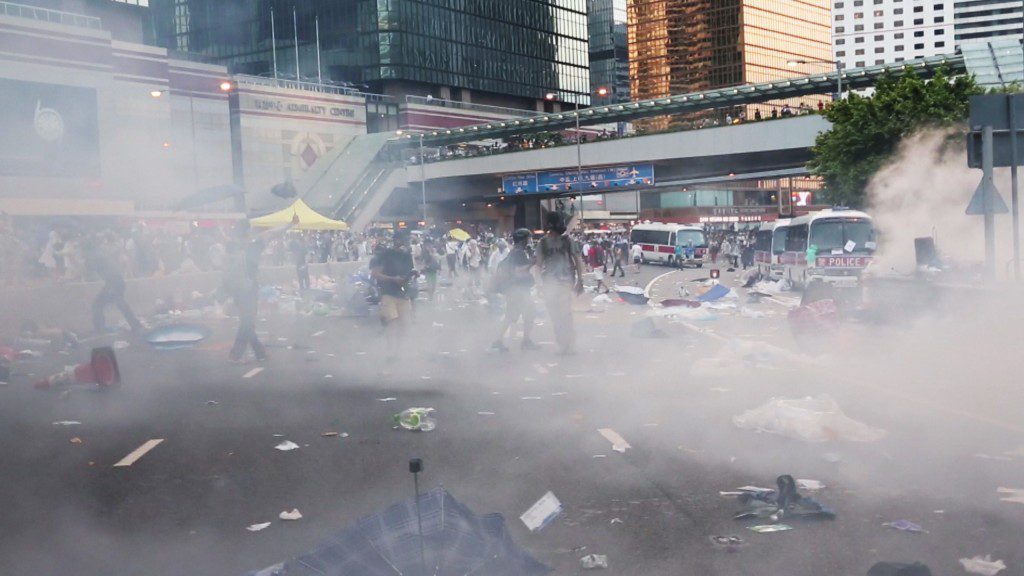 Just as Vietnamese-American filmmaker Trinh T. Minh-ha has described the intentions of Reassemblage—her film depicting footage from Senegal with no explanatory narrative or interpolating description—it was “not to speak about/Just speak nearby.” For Yellowing, I’m not sure what Chan made even qualifies as speaking, but rather scribing. Every revolution needs a camera. At the Q&A following the Vancouver screening of Yellowing, Chan was asked what he hoped the film would do. He referred back to a moment in the film, a few days before the occupation site was demolished, where he conferred with two of the main protagonist/protesters of his film, leaning against a fence looking rather dispirited. They charged him with the task of showing them the film in 10 or so years, to remind them of what they were like and what they believe in, and that that would be only thing the film can claim to do.

Next post Bruce Conner: It's All True at the San Francisco Museum of Modern Art