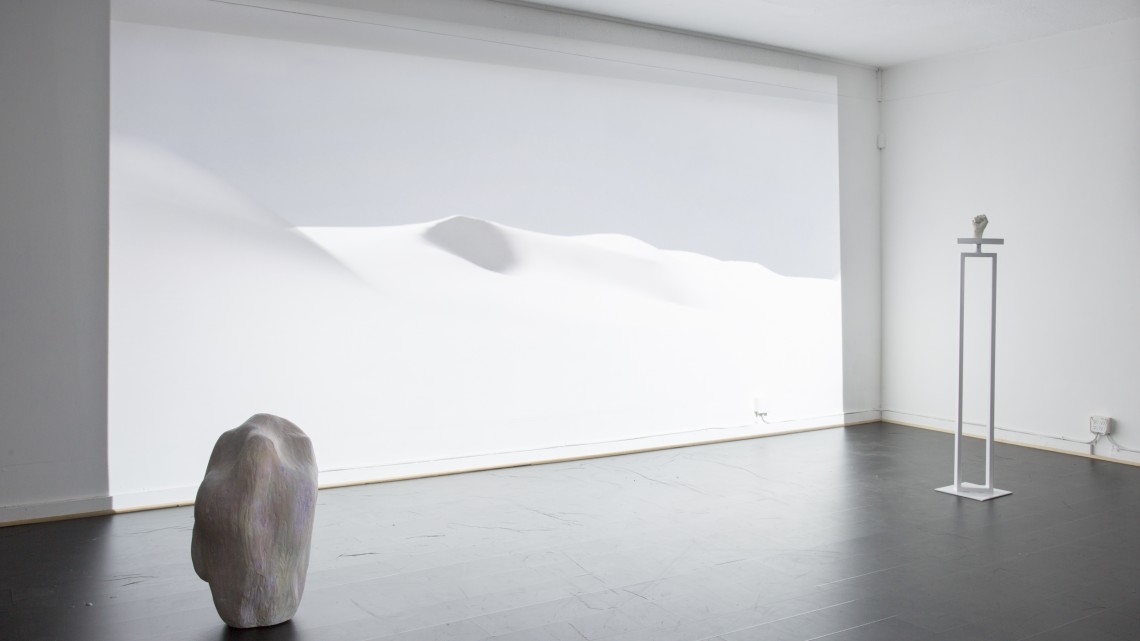 City Limits is presenting Rhonda Holberton and James Cordas, featuring their new work as a two-person show; the pairing juxtaposes both quiet and loud visual and sensory experiences—singularly titled Cold Storage. The room is a bit crowded, so seeing the two for their individual merits is difficult. Not that there needs to be the same number of pieces by each artist, but leaving space to breathe between the two would have been beneficial for visitors to be able to experience the work more fully. The work of each artist is in conversation with the other, but more evident at first are their differences.

Holberton’s work is more subtle, visually speaking, in her predominantly white color palette and several understated sculptures, whereas Cordas’s works incorporate a rainbow of colors, spatially dominating sculpture, as well as an audio piece that overshadows the entire space and therefore the whole show. Both artists also include film in their work: Holberton’s monochromatic white film of one subject occupies one wall, whereas Cordas offers two films of multiple images on two monitors. Additionally, the gallery chose to, with the approval of the artists, scatter the floor with fluorescent light tubes in order to illuminate the space from below, rather than from above, so that the space was dimmer than usual and more conducive to viewing the films in conjunction with providing ambient lighting for the sculpture. These can be somewhat easily mistaken as art objects, creating some confusion amongst the work. 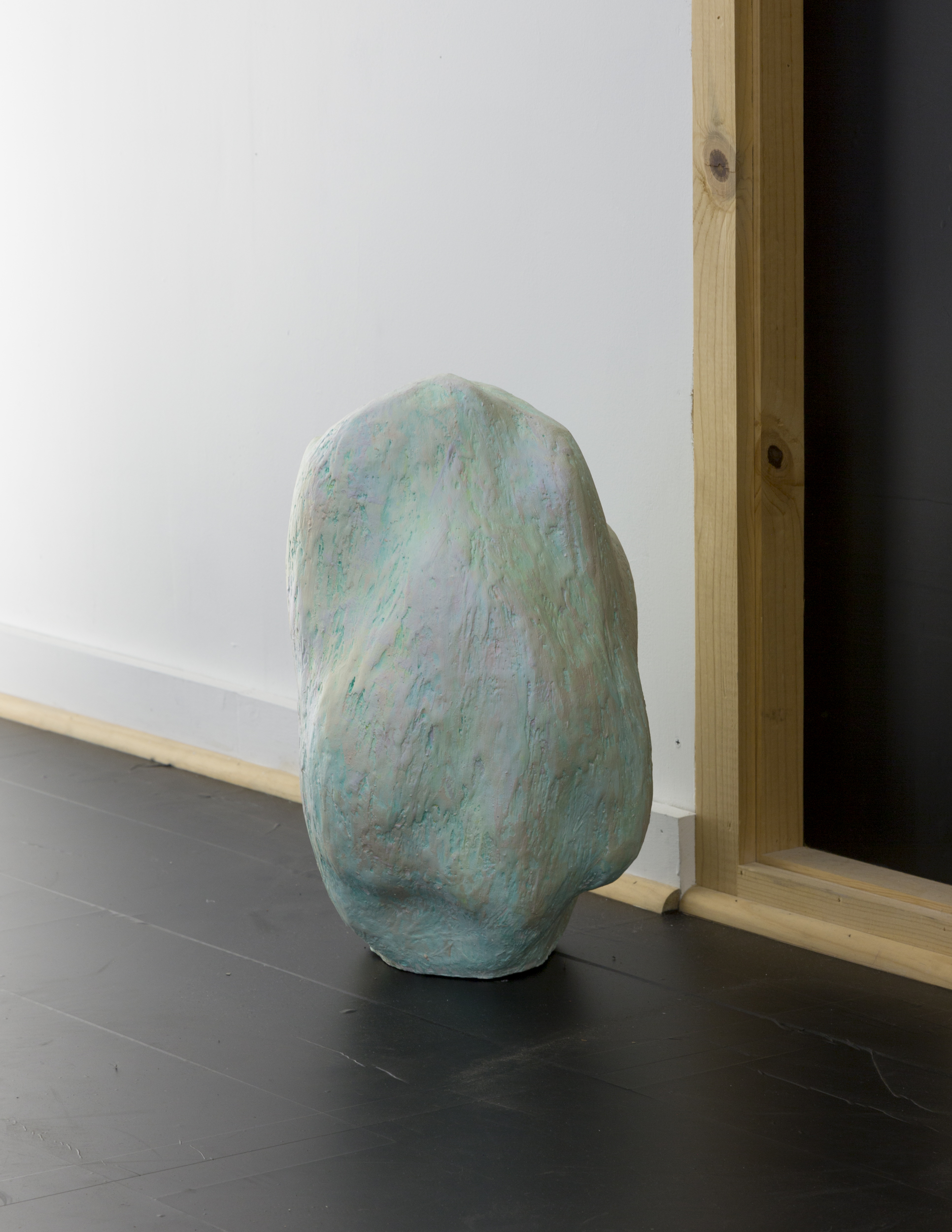 There is potent work here that utilizes digital source materials and tangible objects. Holberton’s series A Fallen Pixel consists of three sculptures, each created using the same downloaded object from a publically sourced website (which Holberton prefers to leave anonymous) and made on a 3D printing device. This unobtrusive shape is iterated in graduating sizes from 28” to 22” to 18,” echoing notions of public accessibility, fair use, and commodification. Upon some Internet sleuthing, I learned that there are at least four dozen sites that offer files (basically templates) for making objects on 3D printers. There are also over 35 sites where people can share, buy or sell file creations, and display the things they make and accumulate friends and followers who also enjoy or make 3D files and objects. Holberton has chosen a rock for her object—which is humorous to say the least, and at once too strange to laugh at. The title implies that the works could have fallen from the sky, as if during a meteor shower or alien invasion. They are coated with plaster and painted with white iridescent pastel sheen, accented by shades of mint green and pale lavender, reiterating a science fiction quality as if they are relics from another planet’s landscape brought back from space exploration. These qualities are in keeping with her history of engaging with the intersection of nature and military operations, particularly the sites of nuclear testing. In doing so, she explores human destruction of Earth, and the pervious dealings of volatile measures that are taken to protect the populace. 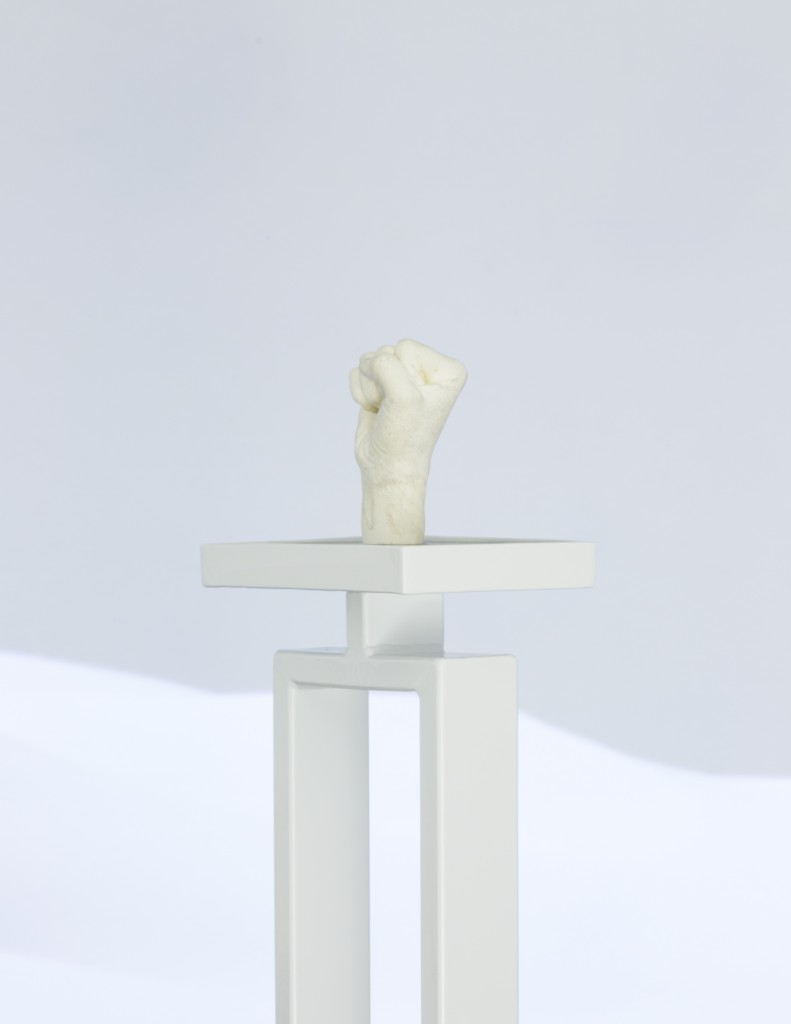 Projected on the largest wall of the gallery is her film Knights of the Sky, which includes footage of sand dunes from the POV of the camera operator walking over and down the crests of sand. The title references WWI combat aerial fighter aces (though a reference to the simulator game of the same name created in 1990 is also an interesting interpretation). Holberton’s film is projected on an entire wall, creating an immersive effect as the camera jostles slightly, bobbing so that the viewer can share in the journey. For Holberton, sand dunes are desolate and contemplative but are also politically charged sites for testing weapons and surveillance. Nearby, her sculpture N-O U-N-R-E-A-L T-H-I-N-G-E-X-I-S-T-S features a clenched fist in polyester resin, as if in defiance against government or military violence. Holberton’s poetic works are simple yet powerful statements about government control that require one to read between the lines—like haiku for insurgent radicals. 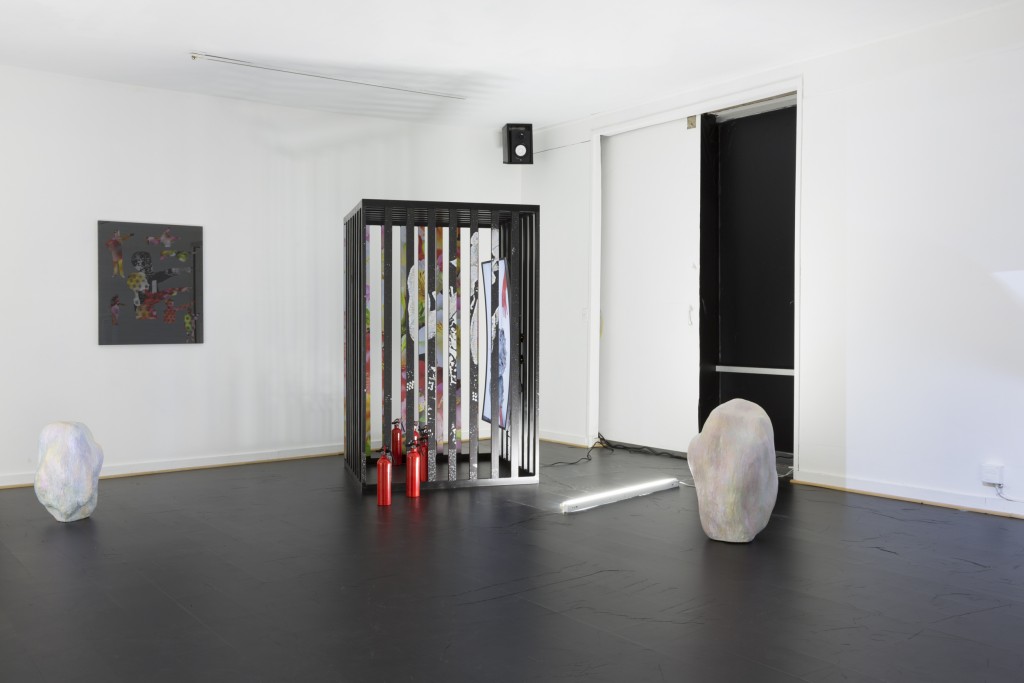 Meanwhile, Cordas’s elephant in the room is the cage-come-jail-cell sculpture that includes panel strips printed with imagery, a monitor inside showing a 23-minute looped video, and a row of small red fire extinguishers that lead from the inside out. Titled A mason jar full of wasps, the video inside features arms painted bright red reaching into a jar with a drowned wasp, including cuts to a mangled wasp nest being handled without gloves—a dangerous innuendo. The sound is foreboding and urgent, with loud shrieks and white noise hushes. Another sound work, WW Alien 3 (1992) and includes a monologue performed by Charles Dutton during a eulogy scene. The audio has been completely altered using a granular sampler that alters the sound to create a loop. In an email exchange with him, Cordas shared that the first music CD he purchased as a youth was the Alien 3 soundtrack, bypassing the popular skater punk, grunge, and Brit-Pop of the ‘90s for something that scared him—prompting him to seek answers as to why he was, and clearly still is enamored by the orchestration of Goldenthal’s music. 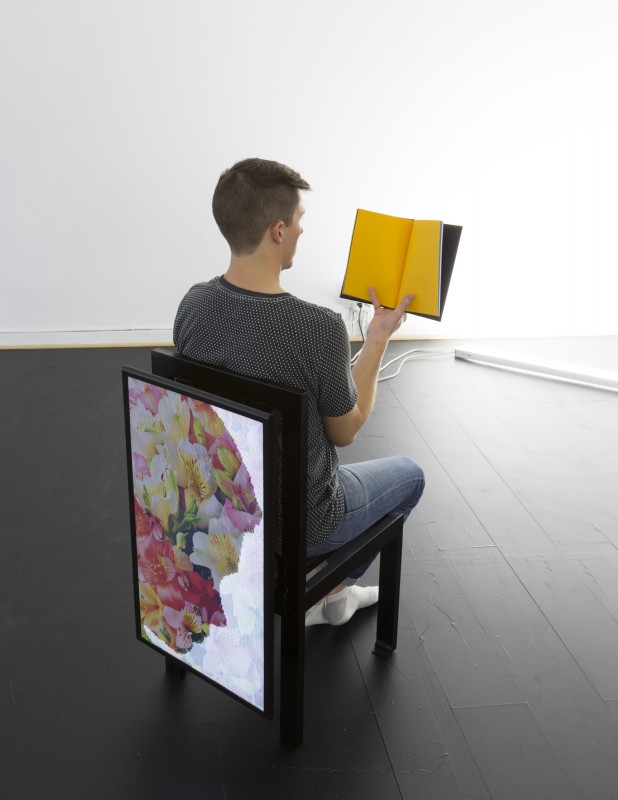 The act of sampling music is a regular practice for Cordas, whether with music, images, or language—and he more frequently has been working on collaborations, including writing and reading poetry. For this show Cordas invited writer Kevin Killian to rewrite poet James Gendron’s Sexual Boat (Sex Boats) (2013), into a limited edition hard-bound book, which includes several solid single-color pages that act as an artist interlude by Cordas. During the opening reception, Gendron himself sat in a piece titled Chair, which includes an embedded video monitor that screens over 100 original photos of lily imagery, also reiterated on the jail cell bars. Gendron stared at the monochromatic pages during the exhibition in order to alter his vision perception of light after staring at color. Throughout Cordas’s work, there are multiple layers of repetition, be it bars, flashing imagery, or painted, perforated surfaces. Thematically, Cordas grapples with many emotions of love, of color perception, feelings of containment and ritual, as well as issues of altered states of awareness.

Together, Cordas and Holberton reconsider the roles people play in relation to each other, be it through government control or with language and imagery, each using their own very personal interests to channel these ideas. Conceptually, they both tap into the frightening world of information sharing that blurs public and private space. Aesthetically, the work is disparate on the outside, but in the end it is the human condition that they both seek. Their work is loaded with complex backstories that are not easily accessed without inquiry (or further research)—not unlike the privacy many people seek in their own lives. 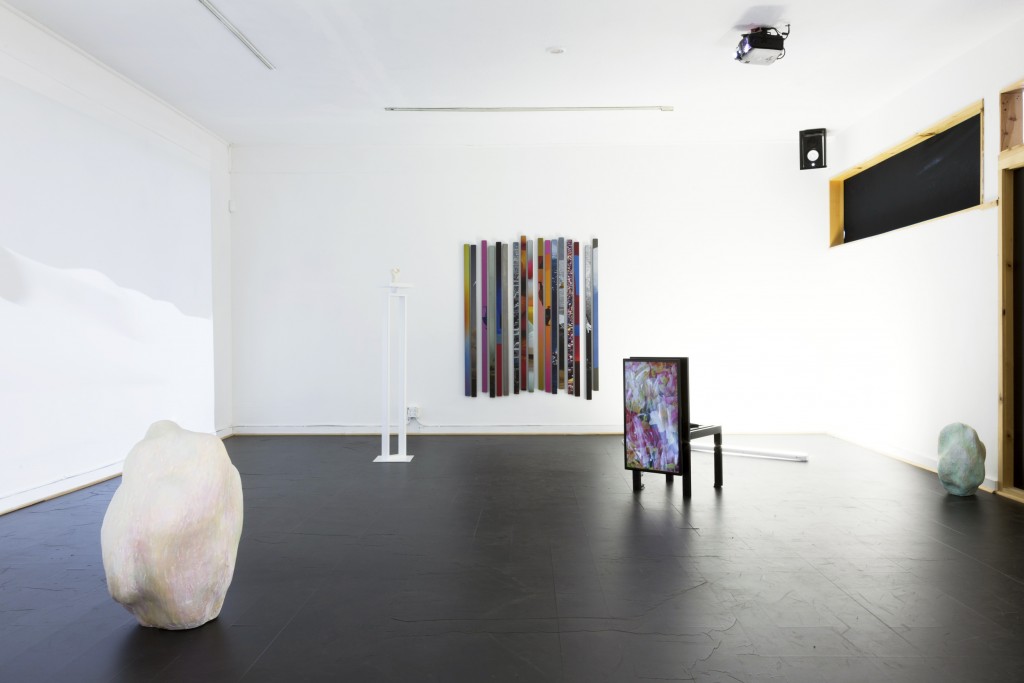