The Melancholy Decadence of Chris Lux’s With Nude Spoons 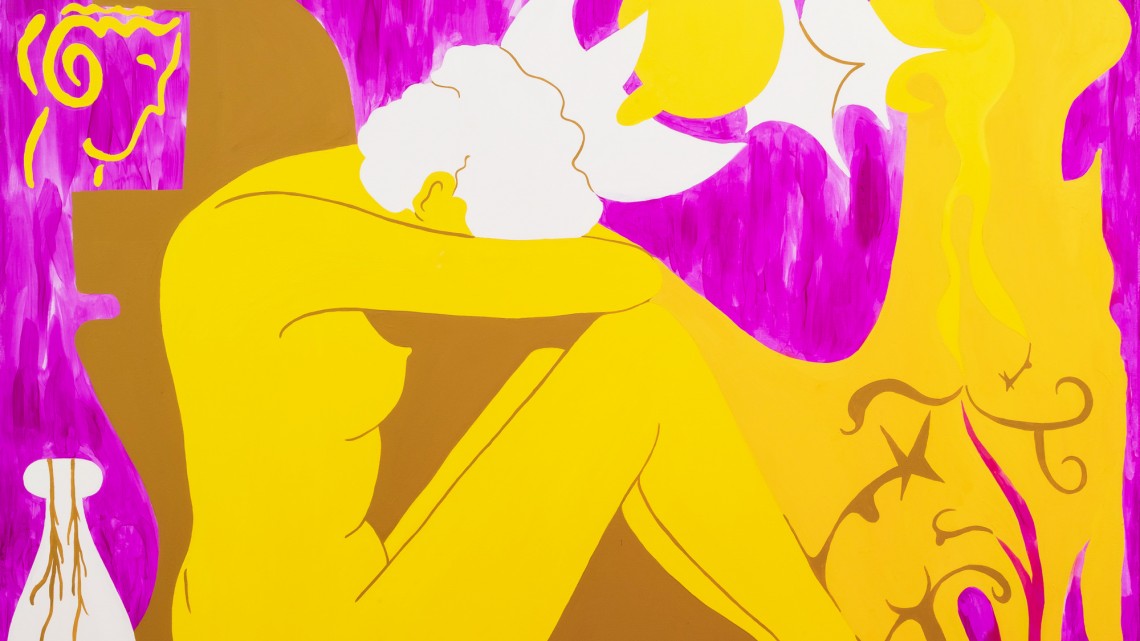 Entering Chris Lux’s solo exhibition With Nude Spoons at Et al. is like walking into a grotesquely glamorous den of iniquity. The sordid feel is marked by the overwhelming fuchsia paint that smears the walls in half of the gallery space. Tiptoeing into it, the space feels like the entrance to a hidden boudoir. One’s depth perception of the space is completely altered by the contrast of white walls in the front of the gallery; in the fuchsia area, the shadows have melted into the streaks of the painted walls, creating flatness when viewed from a distance, while the white portion of the room seems unusually larger. The vibrant façade is ironically concealing an undertone of lascivious and melancholy subject matter, despite its magnetic and alluring appearance.

For this exhibition, Lux references the epic ancient Chinese tale of vice and morality Jin Ping Mei—translated as The Golden Lotus—which was written during the Ming Dynasty (1368-1644); exceeding 1200 pages, it is known for its explicit and sometimes pornographic, highly poetic language. The story spans several years in the lives of three women and the men who keep them, detailing sexual deviancy and fetishistic routines, murder, jealousy, and overall emotional turmoil. Critics laud the story’s three female protagonists, their antagonists, and their scenarios as a treatise of human behavior.

Three large paintings of nude female figures anchor the exhibition, presumably depicting characters of The Golden Lotus: Pan Jinlian (Golden Lotus), Li Ping’er (Little Vase), and Pang Chunmei (Spring Plum Blossoms). Lux’s Li Ping’er and The Favorite hang on opposite walls in the fuchsia section of the room; their backgrounds blend in with exactly the same color as the walls, creating a mural effect. Bright cadmium yellow and rich vermilion red are accented by deep black and stark white. Pan Jinlian is Melancholy is a third painting—predominantly yellow—which hangs in the white portion of the gallery. In all three works, the entirely monochromatic figures, whose bodies are in profile, are surrounded by vases and curvilinear shapes, similar to narrative murals found on frescoes in ancient Greece. 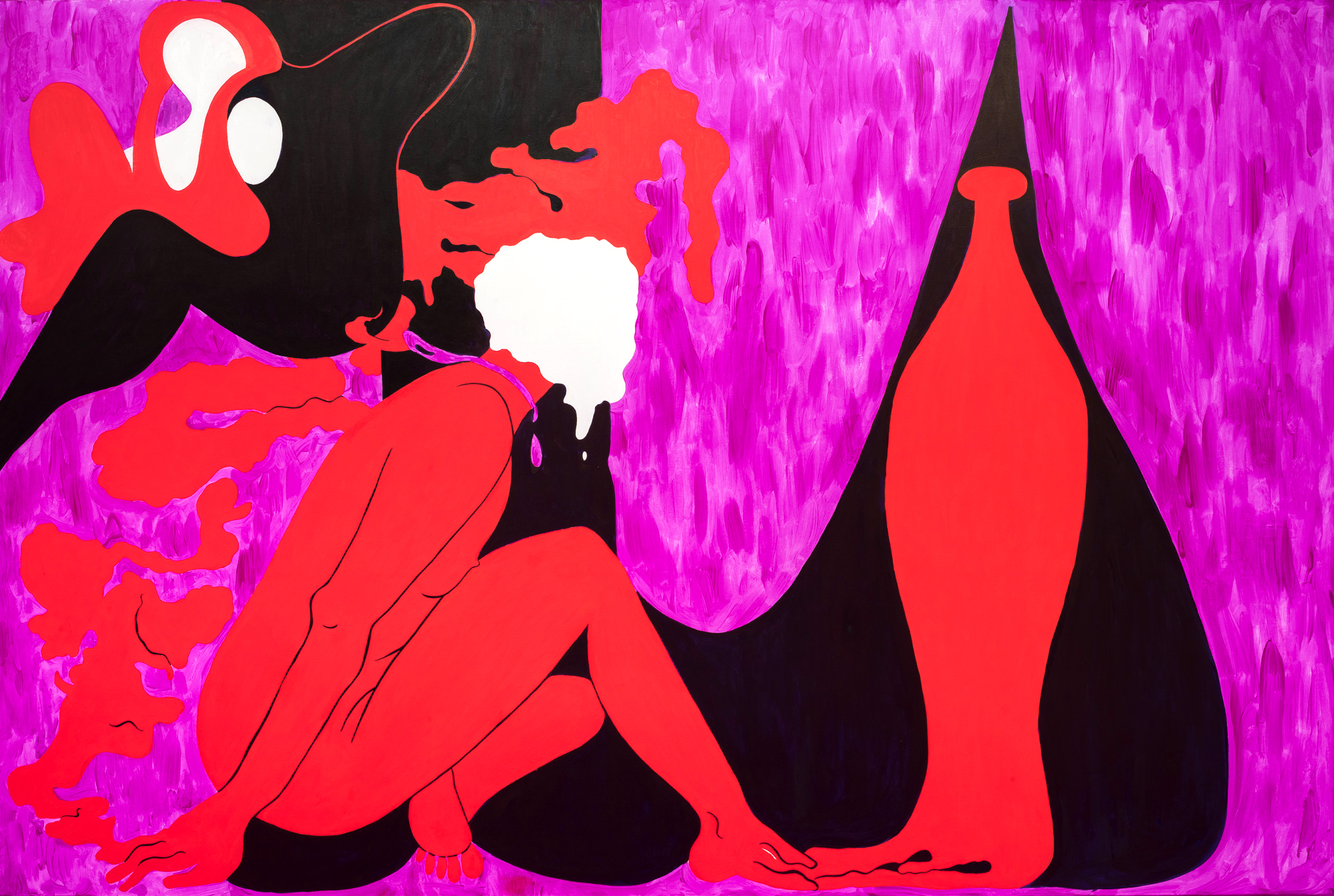 To coincide with the paintings, Lux provides short, eloquent excerpted texts from the huge volume. The texts are offered as a “guide” in a separate hand-out when visiting the gallery. In this way, the viewer can look at the work along with the texts if they choose to do so. The language reveals nature’s changing seasons and the emotions that sometimes coincide such as, “Spring comes, and sorrow with it. Spring goes, but sorrow stays,” or tender moments of pain and longing: “When I think of you, my mind is consumed.” These extracted passages provide some background for interpreting the work and they impart a tremendously endearing and romantic potency.

Also on view atop fuchsia-painted pedestals are two mixed-media ceramic lamps and an abstract sculptural vessel. The work is chunky, visceral, and somewhat messy. Lotus Blossom is lovely yet crude; it is formed by awkwardly bent and pressed clay slabs, while carefully cut-out shapes mimic those in the paintings. A round “flower” protrudes from one side, yet its vitality is lost in abstraction. Several artists who work in ceramics come to mind: Allison Schulnik’s strange ceramic cats and clowns, Robert Arneson’s early work from the California Funk movement or even Peter Voulkos (but less macho). Two of Lux’s ceramic pieces are actually candelabras, playing with the notion of function in sculptural form. The Baby Guan’ge includes an innocent, forlorn-looking face with multiple tiny candles nestled within a concave head of squiggly hair, atop a speckled, swaddling cloth-like column. Another character in The Golden Lotus, the baby was martyred out of jealousy between the female characters and paternal posturing, succumbing to neglect and illness as a result. Everything seemingly beautiful here is tinged with sadness. 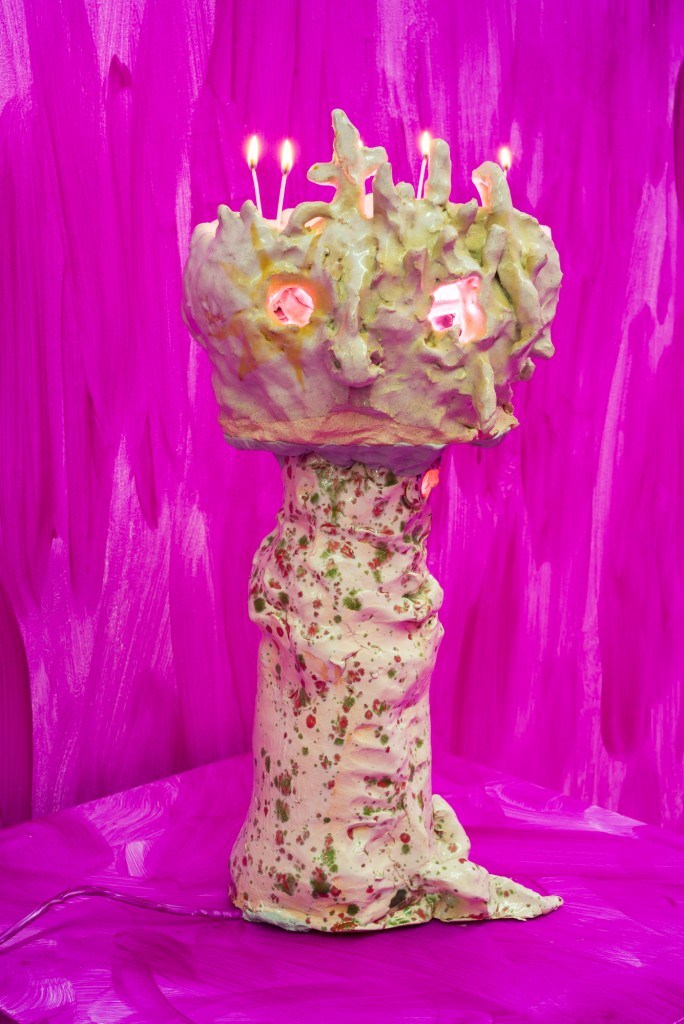 Lux’s previous work has been influenced by hagiographies, which are biographies of important historical religious figures that account their lives and accomplishments to society, particularly ceremonial traditions and practices. The postmodern dilemma revealed to us that nothing is new; therefore, it’s a little too easy to say that Lux is making an argument for originality by his use of appropriation. By using The Golden Lotus as a departure point of carnal and deceptive events, Lux spins the tale into a modern dialog between ancient and contemporary art. More importantly, Lux is creating not only a redaction of The Golden Lotus, he is also parsing base attributes of the human condition through his own visual commentary. The garish tones and the sensual subject matter impart an uncomfortable luxuriousness—it looks fancy, but has an imperfect quality as well. This aesthetic aligns with what can be called early 21st century “classical” art, and worth seeing for both its timelessness and conceptual merits.