Multigrain Dreams: Check All That Apply by era Dance Collective 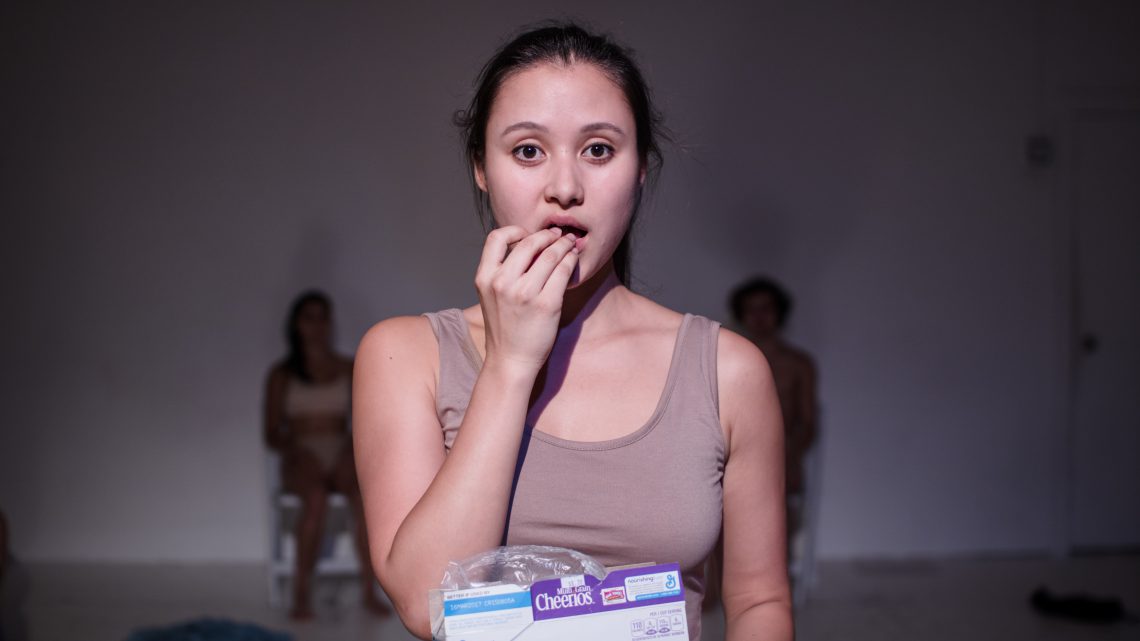 The first declaration was that Check All That Apply: a declaration of mixed existence would not be a performance as such, but rather a “workshop” in which the performers would articulate a reclamation of “the bits of [their] histories that are often erased.” The tone of the piece was casual from the start. Four or five dancers at a time sat in white folding chairs set up in an array on stage facing the audience. Occasionally, one dancer would stand up, move their chair to another place on the floor, and walk out of the room, to return later to a different seat. First one, then two dancers held boxes of Multigrain Cheerios. These they ate in fistfuls from the box before passing it along. A blue kiddie pool on stage was already full of these Cheerios, which were varying shades of beige and brown. The dancers, matching the Cheerios, wore beige and brown undergarments whose colors would probably be classified in the store as “nude”—but, as was clearly the point, the undergarments were never exactly the same shade as the skin they were intended to match. Inadequacies, mismatches, and renegotiations formed the syntax of this piece, which became just as much a question as a declaration. 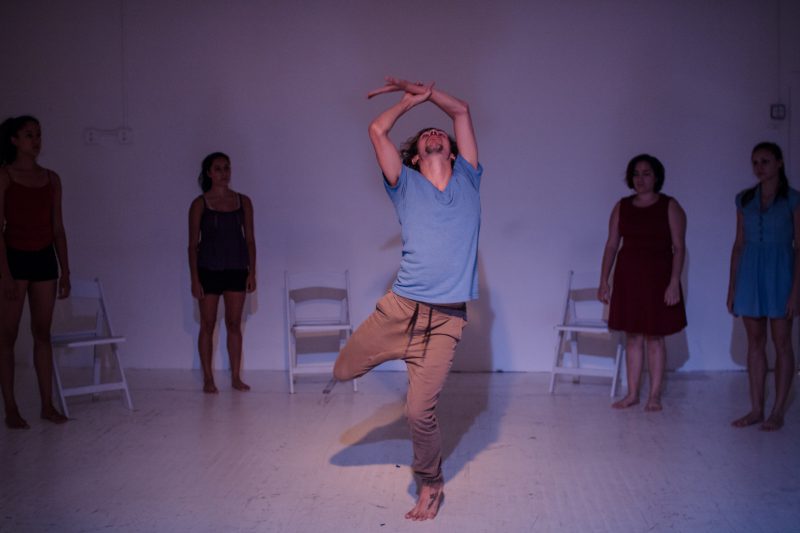 The piece officially began when a voice from the back thanked the audience for coming. Eight dancers were now on stage, and as the low drone of some music started, each dancer turned their chair into the center to form an inward-looking arc. One dancer, spotlighted, stood in the center of the stage eating Cheerios. Another stood up, grabbed the box, and poured it into the existing pool of cereal. Two more dancers quickly moved into the center and began to examine the first’s body as she began to speak: “Dimple on chin that makes it look like a butt, wide feet, bump on nose, curl on left side of mouth, overbite… A little girl asked me if my sisters and I were all adopted because we look so different. A man asked, ‘So other than definitely Asian, what are you?'” As this dancer listed her defining features and began recounting instances of intrusive foreign inspection, or assumptions about her identity, she also tolerated the routine examination of the other dancers. Foot lift, ankle caress, hand rub, and finger trace: these are the physical counterparts to verbal evaluations. “I’ve never understood why people feel the need to appraise and classify my DNA,” she continued. 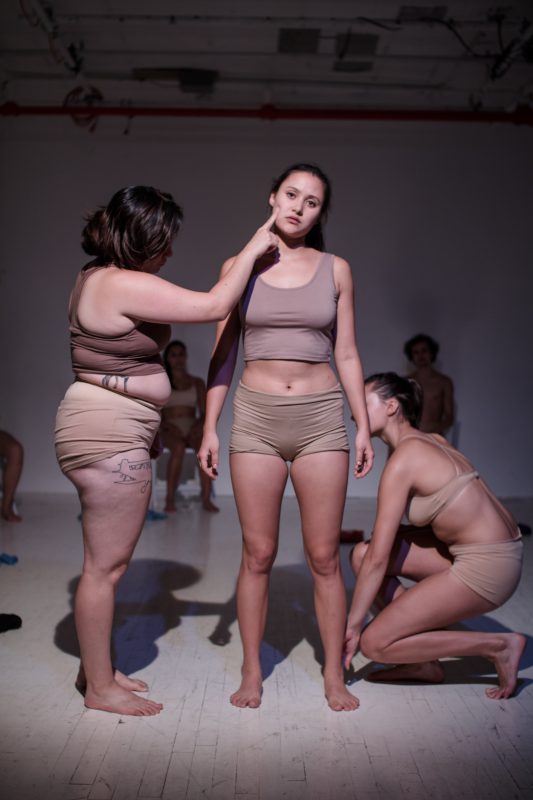 When this first monologue of the night ended, all dancers formed a diagonal line on stage and faced each other in pairs. “What are you?” one asked another, echoing the rude man’s strangely existential question. Down the line this interrogation spread. Its inflection varied from voice to voice, but it always carried a connotation of accusation or confusion. Though the question is grammatically correct, it undeniably implies that the subject is uncategorized, somehow unlike both the speaker and their society. This time, there were no answers, only blank faces of resistance. Soon the line broke and bodies scattered to pick up their respective clothes, which had previously littered the floor. Now clothed, they form a veritable rainbow. The same question is repeated, paired this time with body movements, echoing the verbal-physical translation that accompanied the earlier inspection. 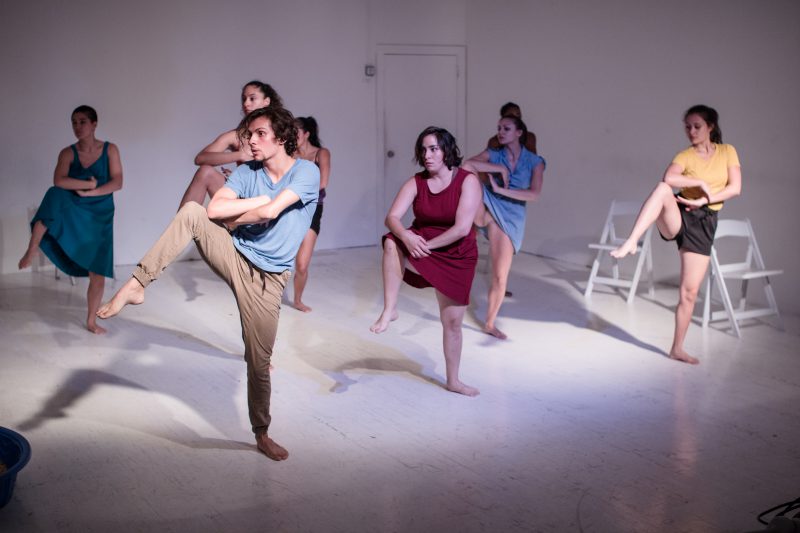 A man previously sitting in the audience (identified in the text as Steven Pacheco) delivers a speech on race midway through the piece, invoking Jesse Owens in an entanglement of race and the races: “The race I speak of has less to do about color than it has to do about class; did you place first or last? You can pass the baton along or you can carry it all by yourself ’til you get burnt out… See, the race I speak of has less to do with melanin and complexion… The race I speak of are races won by Jesse Owens… Ain’t nobody gonna win this race if you don’t pass the baton.” Passing the baton is letting others move. In a verbal sense, it is letting others speak. The fact that this piece is also a “story circle” or a form of communal speech then comes as no surprise.

In a later phrase of the dance, a rapid-fire exchange ensues between two dancers who, now sitting in the tub of oats, ask each other, “Where are you from?” The assumption in this question, of course, is that the subject is foreign and does not belong in this place. They must answer, then, with somewhere else—and they do, but the answer changes each time. From Buenos Aires to “a birth canal,” from Alaska to deep space, these answers may be true or false, but all are meant to satisfy whatever strain of exoticization the speaker imposes.

That pool of Multigrain Cheerios may very well represent the American dream: a hearty breakfast cereal meant to give strength to the consumer. This dream the dancers curse, citing its flawed logic and universal imposition. How can a body embody a dream? Whose dream is it?

By the end of the piece, as they sat in a circle around the tub of oats sharing stories of past accusations, assumptions, and racist encounters, the dancers had articulated some of what it means to live a “mixed existence.” The declaration sought to oppose other peoples’ incessant and insatiable need to classify by proposing another route to its fulfillment: let a body speak for itself on its own terms, and do not let the oppressor escape unscathed. Do not seek to impose order on a body that is already ordered. Above all, expel the notion of the universal human from whom these mixed bodies supposedly deviate.

Yet, sifting through these voices again, the first monologue of the dance was also troublesome, for it seemed to undermine the piece’s mission. When that dancer with the dimpled chin stated that she “occup[ied] such a unique space between races, cultures, nationalities and ethnicities,” the dancer affirmed, in effect, that she was outside of some norm. If there is an answer to the question, “What are you?” how could it be an affirmation of the speaker’s right to question her existence? To respond with a statement of deviance is to perpetuate the myth of others’ purity. Instead, in order to fully reclaim “the bits of our histories that are often erased,” check all that apply, and expect others to do the same. 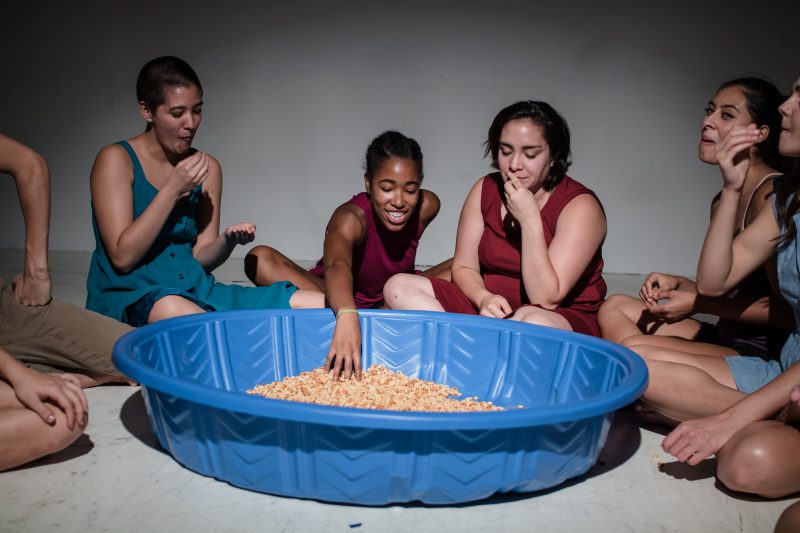 Next post Bowls, Balls and a Hole through the Soul: Mika Rottenberg at Palais de Tokyo