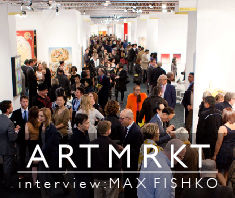 Summer in San Francisco, for art lovers, started off with a bang this year in mid-May.  The buzz around town among collectors, dealers and aspiring artists was art fair fever.  It seemed as though the City by the Bay finally got its star on the art map with a flood of vernissage shows and three significant art fairs the weekend of May 19th through the 22nd, 2011.  One favorite hotspot was the Concourse Exhibition Center, home of artMRKT San Francisco, the inaugural show under the management team of the same name, headed by Max Fishko and Jeffrey Wainhause, a New York based team with years of art fair experience.

So why would an East Coast management team in the heart of an established art metropolis choose San Francisco as their first location before heading to The Hamptons and on to Houston?  Why now?  And why San Francisco?  According to Max Fishko, San Francisco was an obvious choice.  Fishko and Wainhause were proud to bring artMRKT to the Bay Area, a city that Fishko says, “has wonderful galleries, fantastic museum support and active nonprofits.” A great fair is “part of the cultural landscape of any city,” notes Fishko, and a major art fair in San Francisco is the perfect opportunity to showcase all the great things about the SF scene.

With roughly 68 exhibitors and nearly 13,000 visitors, artMRKT San Francisco proved to be wildly successful.  Despite competing fairs scheduled throughout the weekend, ArtPadSF at the Phoenix Hotel and SF Fine Art Fair at Fort Mason, attendance and enthusiasm reached unexpected levels for artMRKT dealers and collectors.  The advantage of a full roster of art-world activity over the weekend was “the overlap, which really created a lot of excitement around what was happening,” says Fishko.   The fair environment helped to attract and create new clients, not just seasoned collectors.   By showcasing art in an accessible, non-threatening space that is appealing to beginner collectors, the fair was able to reach a new audience outside of the typical gallery scene.  In a compact downtown with easy access to multiple fairs, visitors weren’t forced to choose one or the other.  Invested collectors intersected with passive viewers across multiple exhibition landscapes.

In addition to producing a major fair with potential to greatly improve the cultural scope of the Bay Area, artMRKT also served the local community by raising funds for some of the Bay Area’s most notable arts organizations and nonprofits.   The MRKTworks Auction Program is an online component of the fair in conjunction with a live auction of works donated by participating dealers: Blythe Projects, Charlie James Gallery, Forum Gallery, Jack Fischer Gallery and Nancy Hoffman Gallery.  The auction raised funds for its five beneficiaries: Art Practical, Creativity Explored, Headlands Center for the Arts, Intersection for the Arts and Southern Exposure. The significance of the MRKTworks Auction Program is its ability to “bridge the gap between real life and online patronage in a unique way,” notes Fishko.  In another philanthropic gesture, all proceeds from the Benefit Preview Party, held on Thursday, May 19, 2011 were donated to The Art Program of UCSF Medical Center at Mission Bay.

With all of the anticipation, hype and eventual success of the weekend, the city of San Francisco proved that it can, and will, support the growing contemporary art market.  The excitement around the ever-growing art scene in the Bay Area leaves its audience wondering, “what’s next.”  Will the momentum continue to push forward or will it fizzle out?  Encouraged by this year’s success, Max Fishko and his team are looking forward to an even bigger artMRKT for 2012.  The production team has already started formulating plans to improve and expand the fair for next year.  Specifically, Fishko and Wainhause are considering more programming, including panel discussions and guest lecturers in addition to the MRKTworks Auction Program already in place.

“We were thrilled at the response from collectors,” says Fishko.  It seems as though that optimism is shared throughout the art community in San Francisco.  A small spark has been ignited, skepticism has been squashed and with artMRKT’s first year complete, the possibilities for the future look pretty promising.