The Gamificiation of Everyday Life 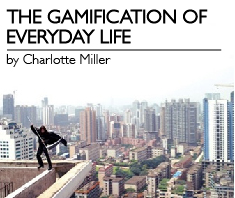 “Artists born after 1980 are more cartoonish, less critical, uninterested in grand events; they like to withdrawal into their little worlds and talk to themselves. I’m more like those born in the 1970’s. My work hasn’t completely lost its critical nature, but there is something game-like about it. It is the combination of the fantasis[y] and the experimenter; observing reality and also to a certain extent, participating in reality.”

Born in China in the Post-70’s generation, Cao Fei is inventing critical vocabularies of artistic expression through the use of “games” as an art medium. I will term these interventions gamescapes, defined as the use of space for gaming practices, creating new understandings, mediations, and transfigurations of social reality as the site of negotiation between the real and the imaginary. Cao Fei (b. 1978) is a video, photography, performance, and installation artist dealing with issues of pop culture, youth culture, and globalization. Artists born in the Post-Cultural Revolution era incorporate pop culture such as cartoon culture and hip-hop culture into their work, referring to themselves as “Brand- New Human Beings (xinzin renlei)”.[2] The Brand-New Human Beings “achieve and express individual freedom of thinking, judging, and acting, they voluntarily and passionately embrace the new technologies of visual culture offered by contemporary information and consumer society.”[3]

In her work COSplayers, 2004, a film and installation project, Cao appropriated the game of “cosplay”, short for “costume playing”. Participants, all urban youth from Guangzhou, dressed as game characters from anime, video games, or manga. Believing that their costumes will give them the magical powers of whomever game character they are emulating, participants believe they can “transcend reality and put themselves above all worldly and mundane concerns.” [4]

Set against the backdrop of nameless construction sites and urban landscapes in Guangzhou with bizarre animals, cosplayers engage in a mock battle shifting between the world of fantasy and everyday life.

As night falls, the characters return home or sit reading the Guangzhou Daily, both metaphors for the return to mundane reality. COSplayers follows the characters returning after the battle to the domestic sphere exposing the rift between the youth generation and their parents, due to the incapability of one generation to understand the other because of the rapid shifts in China’s urban landscape, cultural views, and political agenda in the past two decades.

In an interview with Jerome Sans, Director of the Ullens Center of Contemporary Art in Beijing, in the Breaking Forecast: 8 Key Figures in China’s New Generation Artists, Cao discusses the motivation to create Cosplayers was to look at,

why the younger generation have embraced cosplay- they were looking for a role in which they could escape from real life and imagine they had magical powers, but the reality was that they had been left behind by the economic boom going on around them and they were incapable of changing this gulf between themselves and their families.[5]

Cao positions herself as an observer, creating “docu-drama, a combination of documentary and drama”[6] capturing daily realities of the new urban youth generation in China. Cao remarks, “For me simply recording is not that interesting. When I look at real life, I am drawn to the dramatic aspects of it.”[7]

The participants represent the generation of young Chinese growing up in the past two decades amongst the rapid development of China. This generation of urban youth spends copious amounts of time playing video games and engaging in the virtual world creating a dream-like and imaginative view of the world, and views of their role within the world.

However, once they have become teenagers and young adults, reality sets in that they are incapable of living the lives they aspired to because it is looked down upon by society and older family members. Typical of most teenagers and young adults, they feel estranged from their families and society, resorting to a method of escapism as a means to cope with lost desires and resentments. Escapism takes the form of retreat within the realm of the virtual where dreams and desires can be played out. Becoming their favorite game character, whether it be a princess, a superhero, or a knight in shining armor, these youth momentarily can escape the mundane, forget the generational gap that has been created in the past two decades, and forget the ever-changing environment around them.

This refusal to grow up is a direct result of the cultural, economic, and political policies that have occurred in the post-Cultural Revolution era in China. Resorting to role-play, these youth stubbornly continue to engage in make-believe through cosplay.

Playing out their inner most fantasies of having certain magical powers be the ability to fly or being a skilled ninja, these youth turn to the world of the virtual, the world of play, because that is the world in which they find comfort, understanding, and empowerment. The characters played often are violent or power-hungry, reflecting the fact that in real life, these youth are powerless. The world of the game or gamescape becomes a space in which the youth can exert control over their own destiny, their own lives. In this gamescape, the youth feel like they have worth in society, a feeling that they do not have in the real world. Not only is the gamescape a vehicle for escapism, but also creates a platform in which to reflect on feelings of “alienation from traditional values as well as the sense of loss, disaffection, and melancholy felt by a large number of China’s urban youth. It is in this gap between the realistic cityscapes and the fantastic havens these young people find their heroic alter egos.”[8]

Kamper calls for the return of the idea of mimesis. “In both Aristotle and Plato, mimesis is an imitation of nature based on a lack, which inescapably results in simulation.”[9] For cosplayers, the simulation of a virtual game is due to the need to carve out of space in which to play out their fantasies. Kamper argues that  “Mimesis is original and creates a new world, that of imagination and fantasy, of artificiality and art, which can be assigned a reality of its own…this is only possible with the help of play. As soon as people lose the ability to play, they conflict.”[10] Kamper’s argument dives into the heart of the reason behind the drive of the urban youth to engage in cosplay. Cosplay is a coping mechanism for dealing with the instability of the world around them. Kamper terms the present situation “a paradoxical state..[of] ‘conscious self-deception’. It creates skills for dealing with pain, hunger, desire…when play disappears, one can only go through life as a perpetrator or a victim.”[11] Through cosplay, these youth are able to avoid being labeled as either a “perpetrator” or as a “victim”.

Through the use of the game as a mode of art production, Cao exposes how games are used by the urban youth to turn the everyday into a space to act out their fantasies and dreams turning the everyday sphere into a theater. The gamifiction of everyday life under China’s neo-liberal development has turned these youth into cultural pawns.

Cosplayers in China act out their battles at commercial events or in popular places in order to affirm their existence as a subculture within society. Proclaiming that they are the voice for the youth generation, cosplayers gain media coverage and attention that otherwise these individuals would not have. Through cosplay, they are able to have control, which counters the feelings of alienation, isolation, and misery that occur in their everyday mundane worlds. Cao remarks on these cosplayers that,

Since they seek to hide their personality, the pleasure and sense of honor they gain derives from their virtual characters, not their natural identity. They are prepared to shoulder the burden of a split personality in the everyday world, for such a duality of reality and fantasy soothes and comforts their cravings in the same way as fairy tales have become an indispensable part of their lives.[12]

Living a life of duality, raises the questions of what is the line between the real and fantasy?

Cosplaying blurs the line between the real world and the virtual world because it takes the playing of the game out of the computer or video game, usually played in the domestic/private sphere, and into the real landscape of the city. The game is ripped from its closed and contained box of the computer or video screen and is projected upon the public space of the city.

Through acting out their fantasies in the public sphere they assert their existence as a subculture in China, and force awareness of themselves. This self-promotion also creates a game in media as businesses increasingly use this subculture as promotional objects for consumption and commodities of entertainment, further exposing the nature of Chinese society today, a society of rapid consumption.

It is the cycle of construction of deconstruction that causes the rift between the youth generation and of that generation of the elders. The worlds in which the youth generation and their parents grew up in are two extremely different worlds due to shifts in economic, political, and cultural issues in the Post-Cultural Revolution era. Cao captures this inability to relate and understand one another in her piece COSplayers. As night falls, the cosplayers return home to the domestic/private sphere in which their lives are not understand by the elders.

Evident in the film still above in which father and daughter sit side by side each engaged their own activity, not communicating or interacting with each other. The daughter sits, still dressed in her costume, texting or playing a game on her cell phone. The father sits shirtless wearing his indoor sandals, reading the daily paper. The daily paper references both the everyday mundane reality of the real world as well as an increasingly outmoded source of news, the physical paper. The juxtaposition of the cell phone and the paper exemplify the gap between generations. The still exposes the depressing reality that for the urban youth, the domestic sphere is a place of entrapment, a place where one cannot be onself. Yet the daughter remains dressed as her cosplayer character expressing this refusal to grow up, the refusal to give up role-play and fantasy. It portrays the stubbornness of a subculture to face reality head on and to continually revert to the gamescape as a coping method.

The merging of the imaginary and the real gives rise to experimentation with fantastical views of the self manifested in the act of cosplaying. At the press of a button,  or the shift of a computer mouse, one can completely re-invent their identity in the digital age. Cosplaying takes this re-invention of the self one step further as it uses the real urban landscape as its site for convergence of the real and imaginary.

Cao’s film and installation piece COSplayers exposes the drive behind the fascination with role-playing amongst the urban youth in China. COSplayers provides a cultural critic of a generation caught in a world that is in a constant construction and deconstruction. As China is in a state of constant flux, the urban youth use cosplaying as a way to carve out a safe haven for the reinvention of the self to escape from the mundane reality of everyday life. One day, a cosplayer can take on the personae of a chivalrous knight, and the next a damsel in distress. The use of the game as an art medium in the work of Cao Fei, not only reinvigorates the language of art practice, but also creates a platform for exposing the dystopic condition of contemporary China. The game as an art medium allows for a slipperiness between the real and imaginary, daily life and theater, and the real and the virtual world, exposing the everyday condition for the Post 70’s generation, raised in an era of radical transformation.