Interview with Max and Ari of Oakland Surf Club 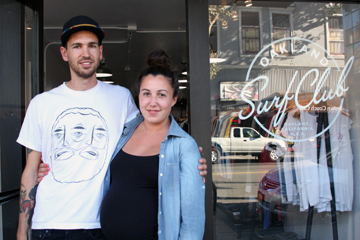 Ari and Max in front of their new Downtown Oakland space

Last month’s First Friday served as the grand opening of Downtown Oakland’s newest independently-run store and gallery: Oakland Surf Club.  The gallery’s inaugural show, BE CQQL MY FQQL, curated by Alberto Cuadros, showcased the works of a group of young artists with a similar fun, DIY aesthetic. The opening proved to be a success as the small space was packed with people coming to show their support and party with the two young owners, Max Klineman and Oakland native, Ariana Serrano-Embree.

I recently sat down with these two to talk about Oakland Surf Club’s role in the community, their future plans with the gallery and to find out what the hell were they thinking when they decided to get married, open a store and have a baby all in a year.

Tell me about Oakland Surf Club… What was the idea behind OSC? 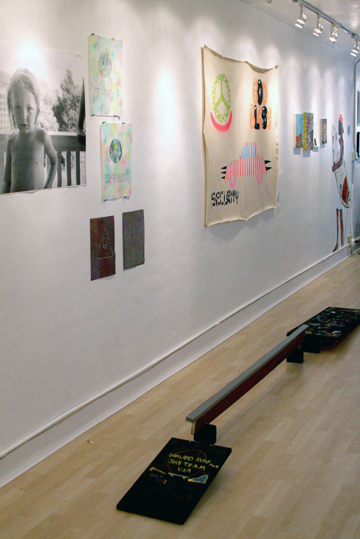 What is it like being so young and starting your own business? What were the challenges you faced before you officially opened?

A: Definitely neither of us has any prior business experience. We were learning everything as we went. Learn as you go and put a lot of faith in yourself. We really believe in what we’re doing – so you kind of have to hope that someone else is going to as well.

M: We understood that we didn’t know everything, so we tried to have people who knew what they were doing around us and helping us. Different people served as advisors to us for different parts of the process. We also tried to keep things really simple – as far as our organization. On the business side, things can really stack up and get kind of crazy.

Max and Ari of OSC

Why did you choose your specific location?

A: I always knew I wanted to open a store in Oakland because I grew up here. I like the downtown area and the feel of it more than the “popular” shopping areas, like Rockridge, Grand Ave., College, Lakeshore, etc… We pretty much only looked at spots that were downtown and we really lucked out with this spot, because we also knew going into this that we wanted to do something more than a store. So, we really lucked out having a store with two distinct spaces were we can have a whole art gallery upstairs.

So Alberto curated the first show in your gallery… Is this a good representation of the aesthetic of the shows you’ll be having in the future? I like this show because it has a really informal, young, amusing quality to it.

M: Yeah, we kind of threw together the show a little more last minute than we would’ve liked and we’ve known Alberto for years. It’s some of our friends and some friends of Alberto’s so it came together with a similar aesthetic.

A: We definitely want to keep supporting our friends and showing art that we like. So, whether it’s a graffiti show, a photography show … we want to keep it really fun up here and to our aesthetic. It’s not a stuffy gallery space. This isn’t a space where we’re trying to make money off of selling people’s art, it’s a space where people can put their art where they might not put it somewhere else.

M: I think a lot of what we do in the store is built off of networks of people we know. Our friends or friends of friends. So it works out because even if I don’t know these people, I know so-and-so knows them and I can trust their taste. I would like the gallery to have a reputation of having good shows but not at all limiting the stuff that we’re showcasing. Any genre – a solo show, a group show – doesn’t matter to us.

I like that community plays a big role in how you’re running your gallery. Having a network of artists and creative people supporting each other in their ventures is a really positive thing and definitely a good thing for a new gallery space.

M: Yeah, that’s a good point and this is kind of like a clubhouse here. We have people that hang out here and I like that the gallery matches the aesthetic of the people who come here to our store.

A: We like that people come in and ask us about doing music and doing events for our store. If we like it, we want to support it. We’re very open to seeing people’s art and supporting people who are down and really excited about our space.

What’s the idea behind the name Oakland Surf Club?

Max and Ari with a collection of surfboards

M: Well it goes back to the old days of surfing – the thirties and forties; there were clubs at each beach in southern California – I think up to Santa Cruz.  For them it was all about repping your spot and taking pride in being a good surfer and there was definitely an element of being really “cool”. Obviously, Oakland never had a surf club, so that’s a fun claim for us.

A: We want our shop to be a hang out spot. Like anyone can come in and feel like they can talk to us and hang.

M: We aren’t so much of a surf club, in the literal sense, like we don’t all go out together and surf but we are a club. But we aren’t exclusive!

Any day now you’ll have your first child! How are things going to change for the OSC when Ari pops the little one out?

A: Ha! I’m going to try to be here a lot less because right now we’re both here 11Am to 7 PM everyday. The benefit of having this great space is I can come and work in the office upstairs with the baby. We’re definitely going to have a shop baby.

M: Literally, we are a mom and pop shop!

What do we have to look forward to from OSC?

M: Dimples is playing August 10th and BE CQQL MY FQQL will be here until the end of August. First Fridays in September will be the opening of the next gallery show. As for future plans, we’re going to work with Meat Market to do a show and we’ve talked to Honor Roll Crew to have something here eventually.

Thanks Ari and Max and congrats on your baby girl that will arrive any day now!

Come check out the gallery, OSC’s selection of artist books, zines, surfboards and skate decks. Swing by August 10th for a free Dimples show and to check out BE CQQL MY FQQL, up until September: