SFAQ Review: “Take It or Leave It: Institution, Image, Ideology” at the Hammer Museum, Los Angeles 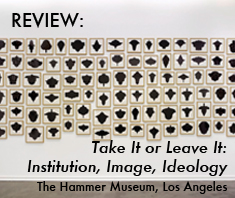 “Take It or Leave It: Institution, Image, Ideology” 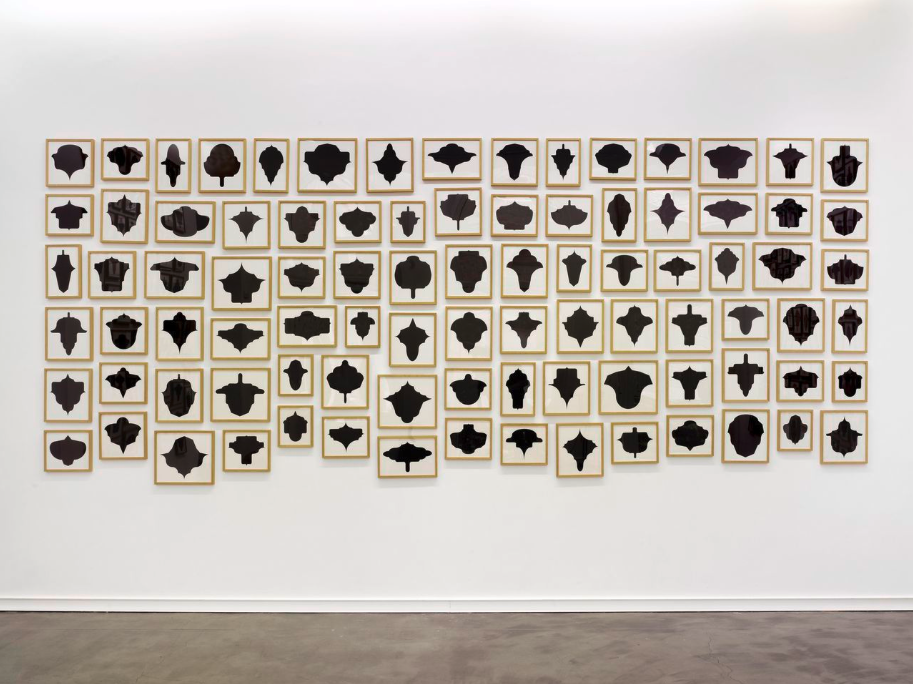 “Collection of 120 drawings” by Allan McCollum. Courtesy of the Hammer Museum.

“Because images do stand in for and motivate social change, the arena of representation is a real ground for struggle.”

The exhibition “Take It or Leave It: Institution, Image, Ideology” at the Hammer Museum is an extensive historical exhibition that examines the fundamental roots of institutional critique and appropriation over a forty-year period beginning with pivotal works by feminist artists of the 1960s. Curated by Anne Ellegood and New Museum curator Johanna Burton, the framework examines the development and evolution of appropriation—the borrowing of images and styles from mass media or fine art sources—and institutional critique—the interrogation of art, society, and its structures from within. As a whole, the framework resists what Barbara Kruger has called “decadism,” presenting works from the past as well as the recent present in order to explore history as a mercurial, fluid subject rather than an overarching period.

With each gallery separated by distinct terms—Representation, Politics, Media, America, Language, Interaction, Public Record, and Archive—the spaces overflow with objects and installations. The exhibition display pushes against conventions of a neatly organized exhibition suggesting that institutions, images, and ideology can all be rather messy subjects. And since the works are not chronological, the exhibition forms a constellation of ideas that create generative slippages between memory, history, the past, and the present, building a potential for these subjects to evolve in the future.

“Museum Highlights” by Andrea Fraser. Courtesy of the Hammer Museum.

Upon entering the first gallery, one is greeted by Andrea Fraser’s “Museum Highlights: A Gallery Talk” (1989) where Fraser acts as the fictitious docent Jane Castleton and gives a tour of the institutional infrastructure of the Philadelphia Museum of Art, setting up an ongoing conversation with the space of the Hammer galleries. In another work, Fraser included wall texts excerpted from her “Notes on the Margin” (1990) that initially give the appearance of museum didactic text. These are actually inflammatory notes appropriated from United States senator Alfonse D’Amato’s remarks against the work of Andres Serrano during the battle for funding for the National Endowment for the Arts (NEA) in 1989:

“This work is shocking, abhorrent, and completely undeserving of any recognition whatsoever. Millions of tax payers are rightfully incensed that their hard-earned dollars were used to honor and support this trash.” 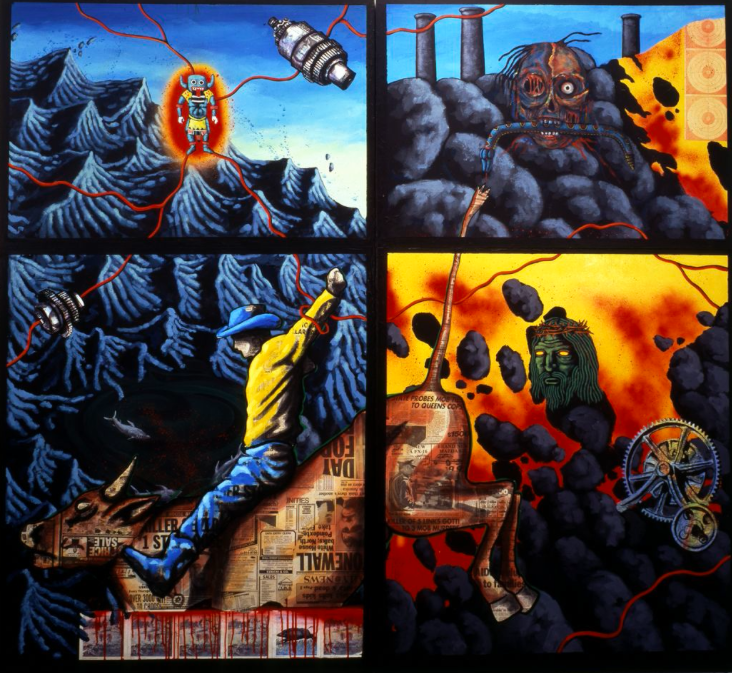 “The Death of American Spirituality” by David Wojnarowicz. Courtesy of the Hammer Museum.

Each gallery space is demanding not only in its subject matter but also in its visual aesthetic. The works are ripe with references from mass-media sources, such as television, newspapers, and advertising, as well as political events and history. In the third gallery, a collaborative drawing by Rirkrit Tiravanija on the 1992 Los Angeles riots brings in UCLA students daily to add shadows and textures to the graphite outlines. The wall drawing is a giant montage of images from archive photos of the riots, some graphic and disorienting, and includes an image of the Geffen Contemporary at MOCA in Downtown Los Angeles with an enormous Barbara Kruger mural on its side. Also by Tiravanija, next to the drawing, is a pile of generic white t-shirts with “Up Against The Wall Mother Fucker” written in bold, capital letters as a take-away for visitors. 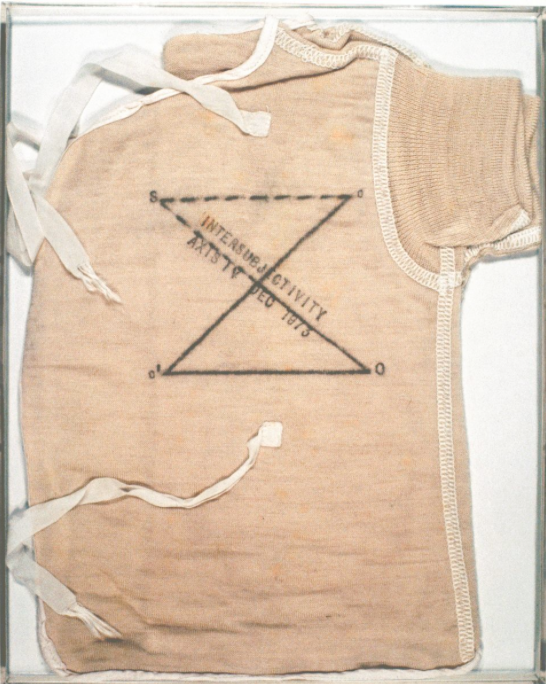 “Post-Partum Document” by Mary Kelly. Courtesy of the Hammer Museum.

In the piece “Cornered” (1988) by Adrian Piper, a TV monitor is mounted behind a large, upended table. Chairs are placed close enough to make a viewer squeeze uncomfortably past its legs to sit in front of Piper’s direct monologue about the implications of black genealogy in America. The piece entangles the viewer physically and intellectually causing the viewer to be implicated in Piper’s call to action or inaction. As well, she incites recognition of one’s own potentially mixed racial heritage, to cite only a few examples.

“September 12” by Robert Gober. Courtesy of the Hammer Museum.

The show is extensive and packed full of large works making some rooms more successful than others. It can be difficult to clearly see the threads between works, and some pieces are overshadowed by larger, or in some cases louder, works. Though some specific works are located around the museum—Louise Lawler’s audio piece “Birdcalls” (1972–81), Barbara Kruger’s newly commissioned “Untitled (Hello/Goodbye)” (2014), Nayland Blake’s aromatic gingerbread house “Feeder 2” (1998), and Haim Steinbach’s vinyl wall text “now you can afford to stop driving each other crazy” (1986)—it is unfortunate that the show could not expand into the other Hammer galleries to bring a little breathing room to these compelling, rarely seen works.

Yet, in evaluating the various aesthetics of the exhibition, it is easy to forget that these works were radical and radically different at their initial time of production. The discourse of the 70s and 80s was a battle between the legitimacy of figuration as representative of modernist values of the “genius” artist, versus the hybrid functions of appropriation as a way to critique art and culture from within. These politics of representation went so far as to eventually reach the upper echelons of American government. One thing is clear: “Take It or Leave It” resists the idea of a fixed style, revealing the embattled discourses and bifurcated ideologies of the time that came to rest in a nebulous zone. 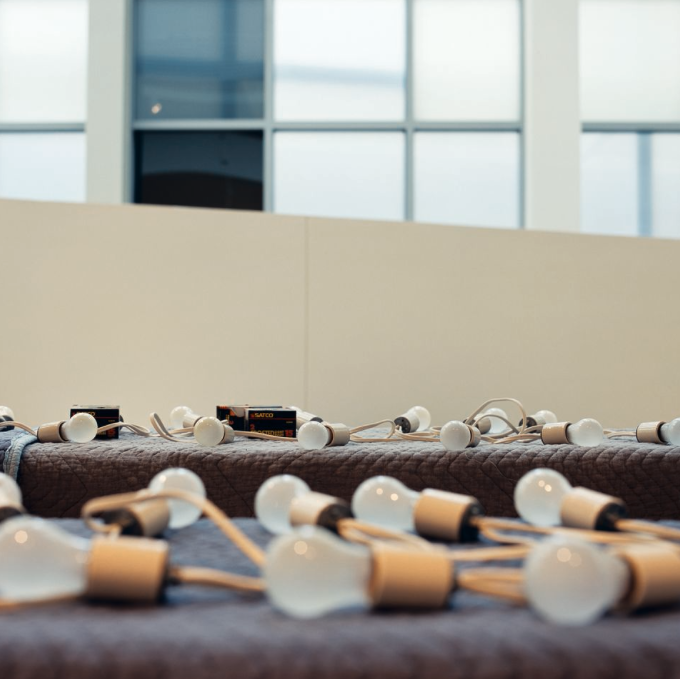 “Bulbs” by Louise Lawler. Courtesy of the Hammer Museum.

These days, the use and abuse of appropriation proliferates in our culture. “Take It or Leave It” allows us to ask how appropriation currently functions in order to consider the possibility of new or emerging terms in a time that is lacking in grand narratives. As stated in Anne Ellegood’s curatorial essay “Mourning in America,” to evaluate “difficult work, we must seek to understand it in terms of both its materiality and its social and political contexts (not one or the other), but we must also carefully examine specifically how it addresses the issue of reception and thus questions art’s role in our society.”