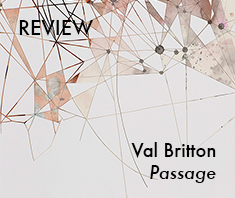 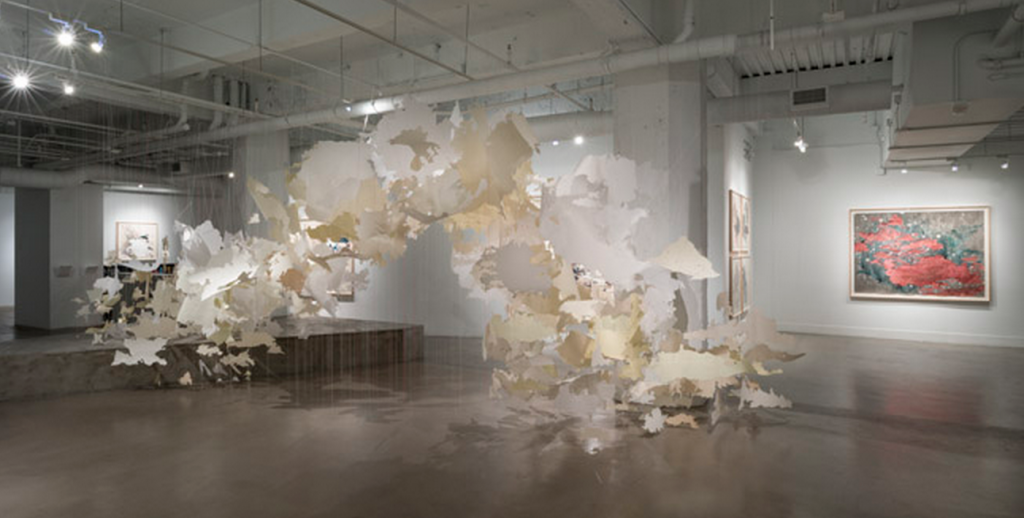 Enter Gallery Wendi Norris and you encounter a large paper sculpture suspended from the ceiling that gently moves with the air currents in the room. A mix of pale grayish-yellows and light yellow-browns, it looks like a whirlwind lain on its side and spinning in slow motion; it is vivid, living, and the perfect introduction to Val Britton’s paper collages. Sourced from her paintings, photos, maps, and, most recently, etched glass, her pieces evoke the ocean, plate tectonics, and the mutable borders between water and land. Britton doesn’t plot her pieces but rather works by intuitively layering cut images, which reflects her background as a printmaker—as do the gray scales of her largely black-and-white works with their hand-cut edges and the distressed patterns of poured paint on paper that make her pieces seem weathered by the sun, rain, and storms. They remind me of John Luther Adams’s vast sonic landscapes, where the accumulation of gradually shifting harmonic patterns echo the ebb and flow of natural forces.1 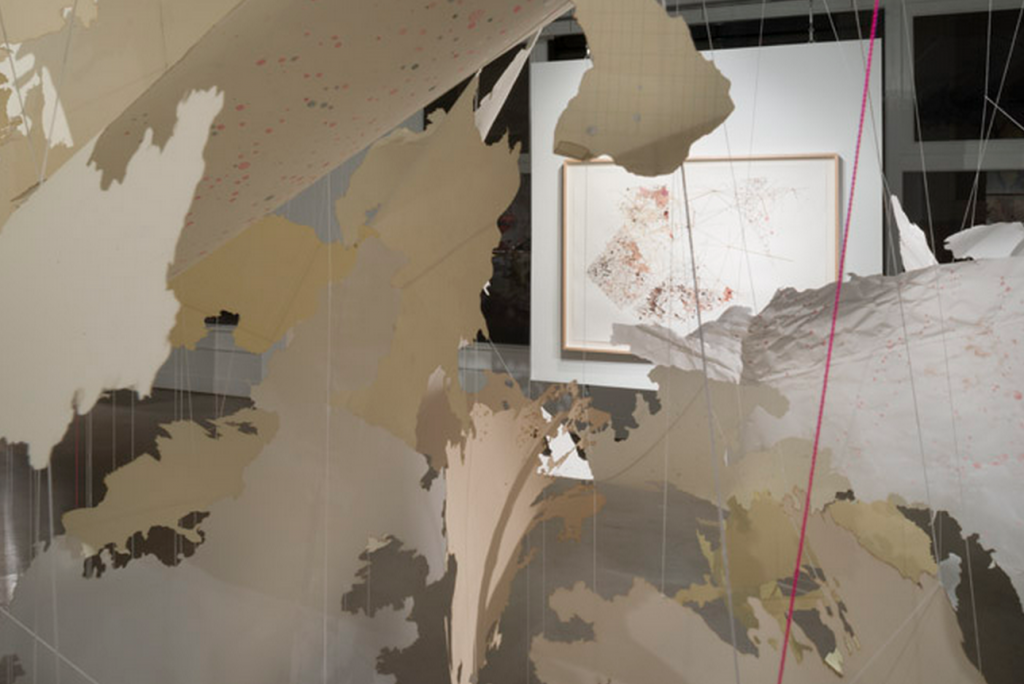 As in lacemaking, where patterns are made by removing threads from a woven background or by leaving empty spaces, Britton’s works are made by cutting through layers of collaged paper that are sometimes combined with underlying grid patterns. Her method resembles knot or lacemaking crafts conjoined with the nonlinear intelligence of spider webs. Her work’s decorative quality testifies to pleasure, to the integrity of the human hand, the singular beauty of craft.2

Her most recent project is an ambitious installation of 15 layered laminated glass panels measuring nearly 10 feet tall and 55 feet wide that will be installed at San Francisco International Airport this fall. Fabricated by Franz Mayer & Co. in Munich, Germany, this panoramic piece draws on research she did at the San Francisco Public Library about the construction of the airport, the landfill, the ghost coastlines, maps and plans of the area throughout its history, the populations traveling through, the weather patterns.

Britton wrote to me: “I gathered, layered, and synthesized the research, bringing my own hand and interpretation to creating an image. It’s my hope the resulting image conveys the flux and interconnectedness of the site and incorporates the layers of history that create a place. . . . The piece is 2D and will be installed on the wall, integrated with the architecture in consultation with the project architects. The panels are created using 2 layers of glass that are laminated together using a clear interlayer to form one solid panel composed of four layers, as each clear piece of glass has information on the front and back layers. The piece is based on a collage I made in my studio, made of paper, ink, and graphite. Working collaboratively with the artisans at Mayer, we translated the collage into glass panels. Some elements have been stenciled and hand painted using melting colors, which are fired in the kiln akin to ceramic glazes. These painted areas have an inky/watercolor quality. Other areas have been etched and filled with pigment, one layer is drawn with graphite, and the back is stenciled and painted with opaque colors. The final piece is not see-through like a window, but solid, like looking at a painting. However, the subtle separation of layers in the glass is analogous to my collage process, and I hope will lend the piece depth and texture.”

Britton’s art is an intuitive charting, or mapping, of unexplored territory. It is beautiful, elegant, solemn, and fragile. It seems to emerge from her unconscious like the automatic writing of the Surrealists with the spatial qualities of Roberto Matta. The narrative of the materials combined with the recording of her feelings and the mediations on the death of her father are cyphers for the collective conscious tracing both the tragic and spiritual dimensions of the human condition.3

For more information about the show, visit Gallery Wendi Norris.

Previous contributions by Lani Asher include:

Buswhick: Looking Backwards into the Future

2 In 2010 Val Britton was part of The Artist in Residence Program at Recology, a solid waste and recycling center in San Francisco.