The Great Acceleration: The Taipei Biennial

Joan Jonas, "Reanimation," (2014). Performance still. Courtesy of the artist and the Internet.

At the outset, let’s get the idea of acceleration straight and up to date: using the parlance of geological time, we might say that at some point around 1,500 C.E., the Holocene era started to give way to the Anthropocene era. The former term signifies the central role that the sun plays in nature and in the agricultural economies that relied upon it, while the latter term signals the emergence of factory-based economies and transcontinental trade, whose superior efficiencies were mistakenly thought to provide great bounties for humans while also minimizing the toil that would be needed to create them. It also signified the notion of humans having a greater effect on their own environment than did any aspect of nature, which was recast as “a construction,” that could be “reconstructed in a number of ways pending the development of various forms of political will.” But there is more: at some other point around 1960, we can say that the Anthropocene era started to give way to the Cybercene, signifying the ascendency of virtual environments literally displacing natural ones, and robot economies displacing manufacturing economies in a way that will eventually lead to bytes displacing atomic particles as the fundamental building blocks of “reality.” 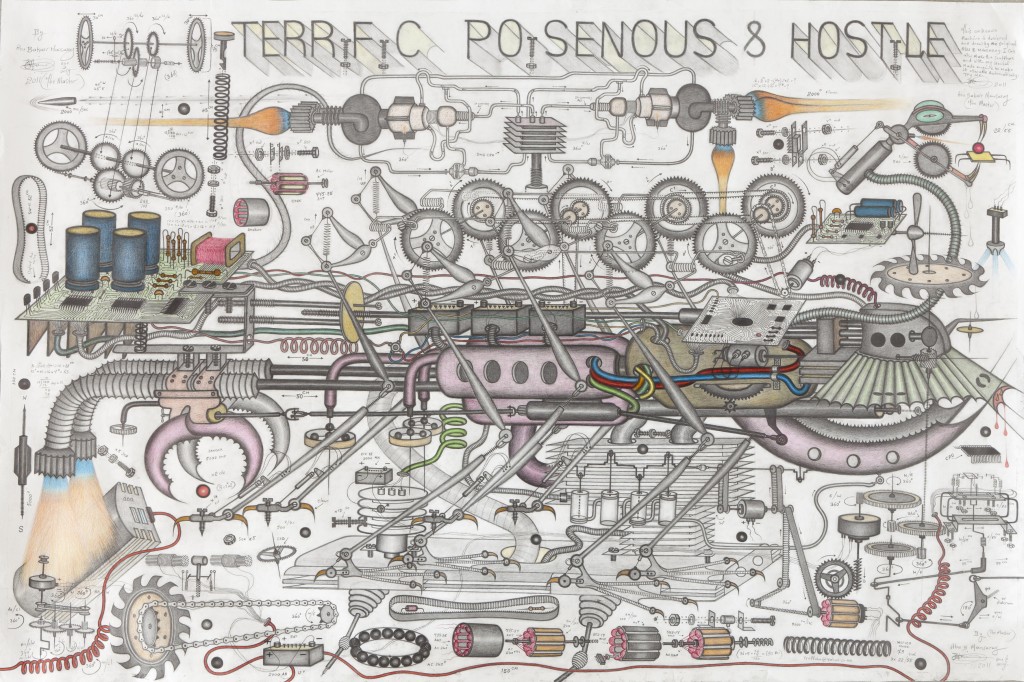 There is neither time nor space here to go into the debate about whether this latter shift harkens good or bad things, because major technological rifts always unleash forces of emancipation and control, with control always becoming the eventual victor that creates the necessity for ever-newer technology. The undeniability of these shifts suffice for the purpose at hand, that being a review of the 2014 Taipei Biennial subtitled The Great Acceleration. Nicolas Bourriaud served as its artistic director, which included the works of 50 artists from almost all parts of the globe. At a deeper level, that purpose becomes synonymous with the chief claim that Bourriaud makes for his project—that the globe is now being impacted by human activity more than it is by any force of geology or nature, but, paradoxically, humans have become spectators or victims of the structures that they have created necessitating “a newly emerging coalition of subordinate actors including citizens, animals, plants, minerals and atmosphere . . . all attacked by a techno-industrial system now clearly detached from civil society.”

Po-Chih Huang, “Production Line: Made in China and Made in Taiwan,” (2014). Installation view at the Taipei biennial. Courtesy of the Internet.

A decade ago, Bourriaud would need no introduction, because his 1998 book titled Relational Aesthetics had already enjoyed the status of being required art world reading for well over a decade. But then came social media, so the very idea of required reading became irrelevant at that moment when sublime vistas of sheer self-infatuation became the order of the day—witness Jerry Saltz’s tweets from Basel Miami (talk about working overtime to make the weather and then complaining about the rain. Yikes!). But here I digress, and then return to Relational Aesthetics. The book’s controversial thesis was that, owing to the technologization of vision, human interactions could be sufficiently objectified so that they could be understood as works of art in their own right. Thus, we had artists serving soup in tony galleries, artist’s manning footwashing stations in museums, and, finally, Occupy Wall Street, which, by virtue of demonstrating how the decuratorialization of relational aesthetics could be coupled with real-world political efficacy, ended up making the art world’s curated version of the same look pretty silly. 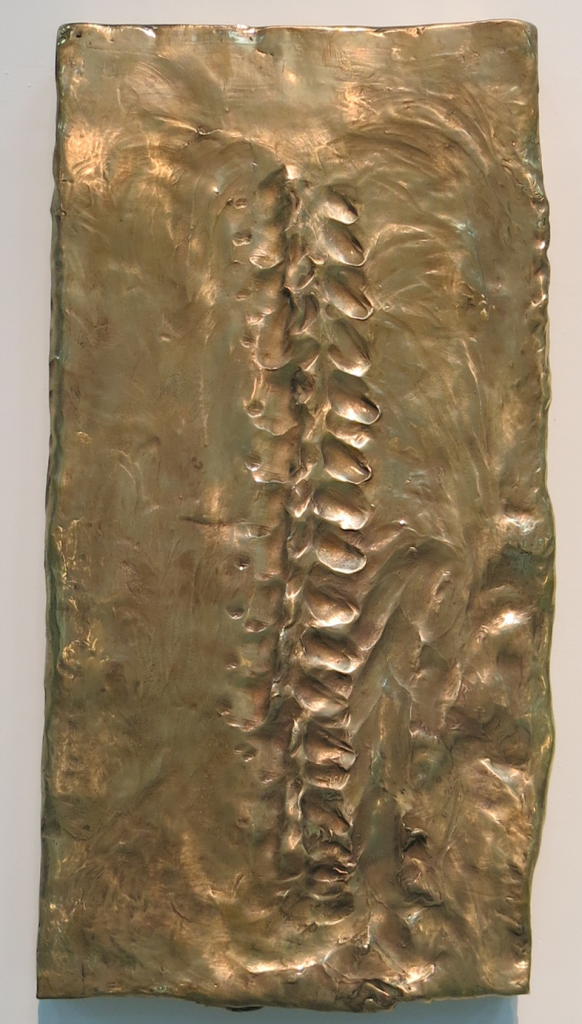 The two works of art that the viewer first encounters when entering the Taipei Biennial are right out of Bourriaud’s relational aesthetics playbook, but the viewer would be mistaken if he or she thought these works to portend the tenor and orientation of the entire exhibition. Good head fake, Nick! Those works are titled Formosa Decelerator (2014) by the Brazilian collective Opavivará!, and Production Line: Made in China and Made in Taiwan (2014) by Po-Chih Huang. The former work pertained to leisure, manifested as a large circular structure that supported several dozen comfortable hammocks that invited viewers to take a break, complete with servers distributing cups of tea. Over-obviously pertaining to labor, the latter work was a sewing station featuring a seamstress making items of clothing out of blue denim material, hanging them on two long racks. Presumably, viewers were invited to take an example for free if they could find one that fit (no XXL for me!). 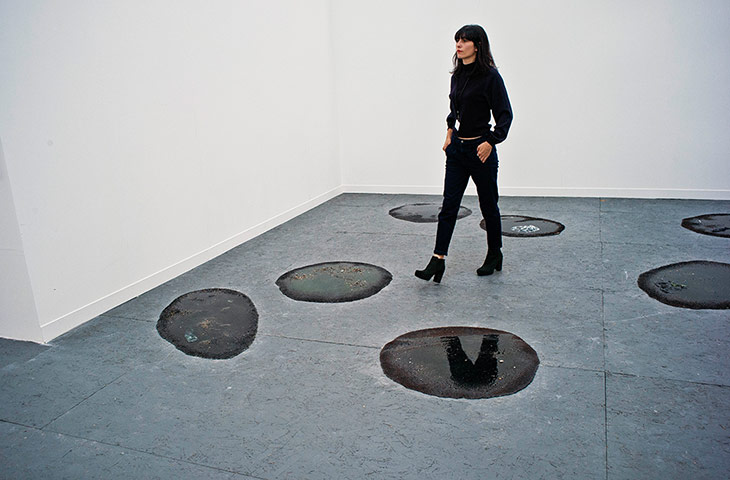 Given the title of the exhibition, I was surprised by how much of the work on view seemed consecrated to the idea of deceleration, usually taking the form of objects that looked like archeological artifacts or strange geological anomalies. For example, we have the massage sculpture created by Camille Henrot using the following process: using several cubic earthen blocks, she asked a variety of massage practitioners to treat the blocks according to the artist’s description of specific symptoms. When this process was complete, the earthen blocks were cast in bronze. Marlie Mul presented seven sculptures that were inside-out casts of rain puddles—the wetter the puddles, the slicker their lacquered surfaces. Harking back in time (the early 1970s to be exact), we witness the work of the Franco-Japanese artist Tetsumi Kudo, whose pollution rearrangements were set atop mounds of earth. Matheus Rocha Pitta showed some very compelling photographs of red Brazilian dirt and red meat, which looked like high-resolution images sent back from an interplanetary probe. 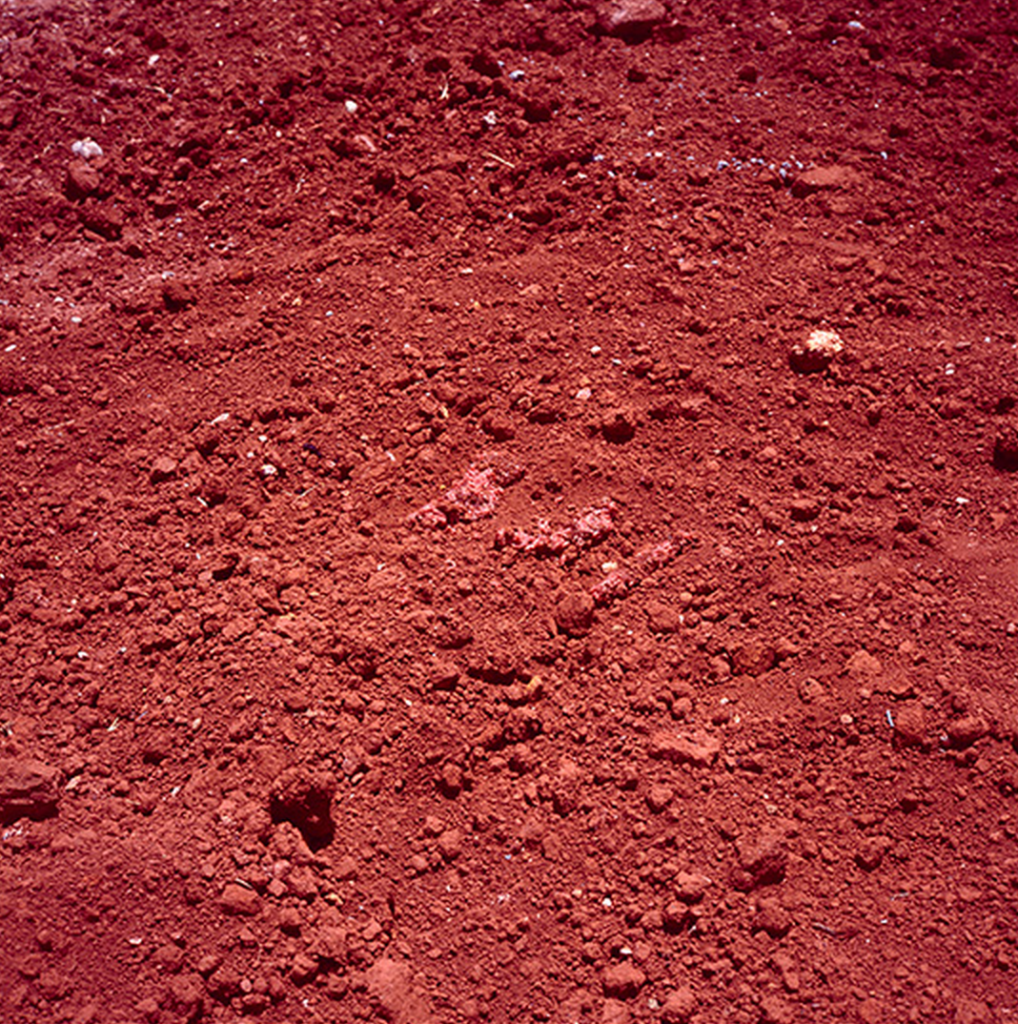 There is also some good new-fashioned surrealism in this exhibition. I was particularly struck by the ultra-modern model of a cruise ship by Hung-Chih Peng titled Noah’s Ark (2014), which was twisted and twirled as if it were made of some kind of pliable rubber. Gilles Barbier presented an ultra-realistic tableaux of sleeping nude humans who were shown to be encroached upon and taken over by aggressive plant and fungal life. Charles Avery presented a room of more or less traditional looking sculpture with slices of geometric shape added to them, the shapes being a covered with bright polychrome color that contrasted the dark gray faux-bronze of the other parts of the work. Hanging from the ceiling were a series of small skeletons for animals that looked like they were once mythological monsters, featuring strange jumps in form and scale—these were by Chu-Chun Teng. Also worthy of note were a series of zany colored drawings by Abu-Bakarr Mansaray, which seemed like an enlarged tinkerer’s notebook that showed schematic representations of various projects running horribly awry. 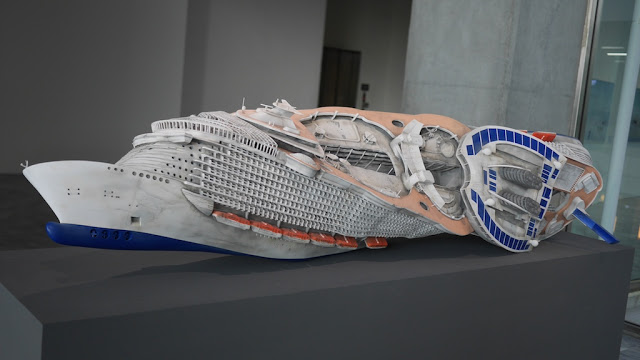 Any review of the Taipei Biennial would be incomplete without mention of the installation by Joan Jonas, who was recently chosen to represent the United States in its national pavilion at the upcoming Venice Biennale. Her presentation at Taipei is titled Reanimation (2014), an earlier version of which having been shown at Documenta 13 in 2012. This was an immersive environment formed out of multiple video projections of glacial caverns pointed at oblique angles onto gossamer fabric that created a kind of undulating dream-world environment where nature is revealed as streams of colliding energy. Another reflection on polar geology was provided by the suite of seven large photographs by Vietnamese/American artist An-My Lé. The subject of these works were arctic circle weather stations, usually inhabited by one lone, isolated figure. These works were compelling vistas of white emptiness punctuated with scattered scientific paraphernalia, all under a bright blue sky given emphasis by reflected light and rich photographic detail. 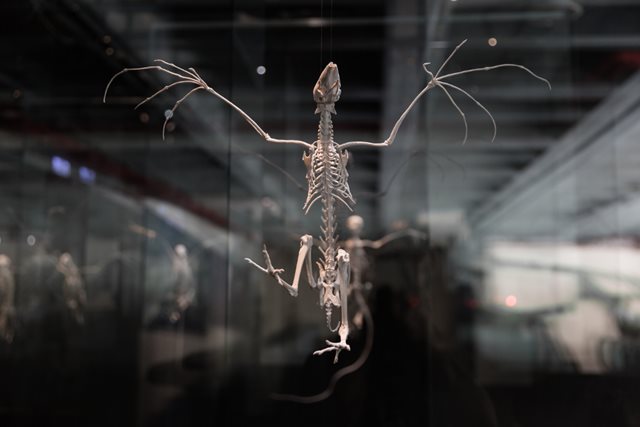 We should all remember George Kubler’s 1962 book titled The Shape of Time, which created a stir in the then-contemporary art world by claiming that the governing metaphors of traditional art history were mired in an implied obedience to the idea of biological time, leading to a narrative of art historical development that unconsciously mirrored the developmental trajectory of the normal human lifespan (i.e. Wolfflinian cycles running from archaic to classic to decadent, etc.). Kubler’s retort to that was his suggestion that we substitute the idea of geological time for the relatively non-sublime notion of biological time, which paved the way for the shift toward the substitution of visual culture for the standard study of art history. Robert Smithson was one of many others who approved of this new perspective, to which I would give the name “gothic post-modernity.” But the question that needed to be asked then is the same one that needs to be asked now: where lies the real benefit of this shift in orientation? The conventional answer seizes on the intrinsic value of “new perspectives,” and finds solace in an ability to take culture seriously (as a contested reality) in a way that includes the ridiculing and reshuffling of contested orders. This formulation is starting to look naïve, because when cultural order becomes an issue of indecisive critical contest, money becomes the thing that settles every issue, as might be witnessed by the recent midterm elections. The other option requires an imaginative recourse to some idea of historical consequence, but that also asks that we pull a reformulated idea of historical import from the dustbin that was created by the embrace of existential and (later) deconstructive critiques of the same. Granted, this is hard but necessary work, but it has to be done if art is to be rescued from the status of mere stuff whose only distinguishing characteristic is that it occupies the institutional spaces where art once lived. 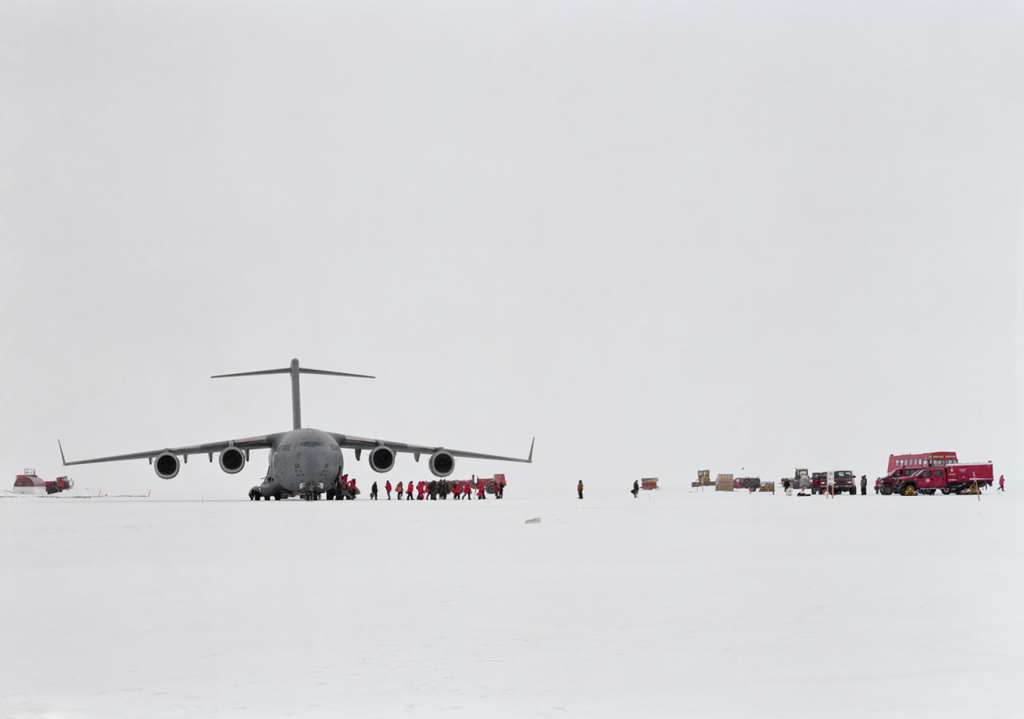 Bourriaud’s Great Acceleration seems alive to this newer awareness of the need for a refreshed critical contest. If much of the work featured in it bespeaks the condition of archaeological relic rather than living work of art, other works suggest other kinds of reanimation insofar as the relation between past and present is concerned—a kind of repurposing of that which was previously repurposed. This is not to say that the aesthetics of insurrection are vividly alive within the exhibition, but it does bear the stamp of serious thought and a willingness to ask some hard questions, and that may be enough for now.

The author would like to express gratitude to the faculty development fund of the San Francisco Art Institute, who provided funding to support the research for this article.