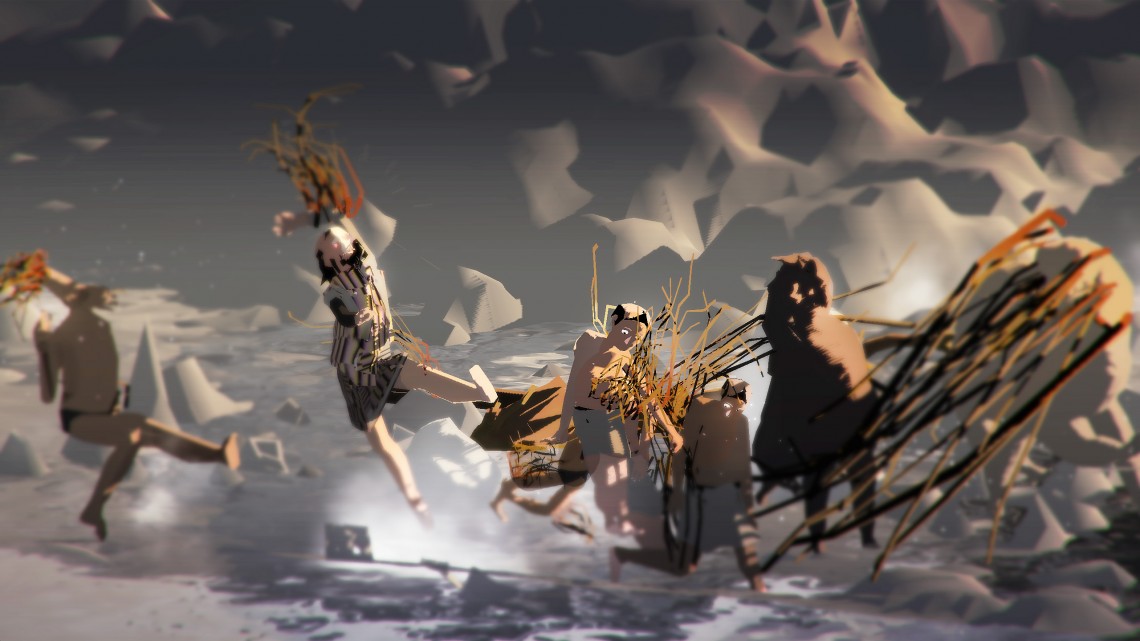 Ian Cheng, "Emissary in the Squat of Gods," 2015. Courtesy of the Internet.

Right next to the BMW & Uber desks, at the south entrance of the fair, is Ian Cheng’s Emissary in the Squat of Gods, self-described as a “live simulation and story, sound,” on one of the biggest LED screens you have ever seen. It’s difficult to see what’s on the screen at first; the dark tones of the video are washed out by the brightness of the room. The white tent of Frieze attracts all the available sunlight, and it illuminates absolutely everything. You are handed a pair of headphones and take a seat on a wooden bench. Visitors walk in between you and the screen, and as for all the other works in the fair, the setting dominates your experience. Through these headphones, an unknown language is being spoken; you can’t quite pinpoint it, and it’s constantly interrupted by audible glitches. As a story develops before your eyes, the sounds starts to feel strangely familiar and the video and audio become a singular world. The rendered members of an ancient community occupy a desert/mountain/volcano. They wait in the dark, light fires, celebrate, and hallucinate. You realize that the glitches are part of a genesis, a programmed world being born. You are reminded that you are living at the dawn of the digital age; new languages are being invented, new technologies are developing, and your behavior towards your environment is changing—a harsh yet impeccable welcome to the Frieze Art Fair.

Flux-Labyrinth is a wooden maze for adults conceived by George Maciunas in collaboration with other Fluxus artists for Frieze Projects. The maze is primarily made of plywood and seems like it could fall apart at any minute. What’s fun about this piece is that you would never see it in a museum due to safety regulations. It’s disorienting walking through the different environments—doors open where they should be closing and close when they should be opening; there is no sense of right or left and nothing separates you from behind the scenes. You take your shoes off to walk on beans, fill out a form about animals, which is immediately shredded, and hear the voices of the other disoriented visitors. Although started in 1976, Flux- Labyrinth is for you. As the new viewer, you test the laws of nature, you question your surroundings, you want to be reminded of your physicality, and, most importantly, you value experience, simulation, and stimulation over materiality. You think: let’s play together! Ideally, the whole fair would be like a Flux-Labyrinth. 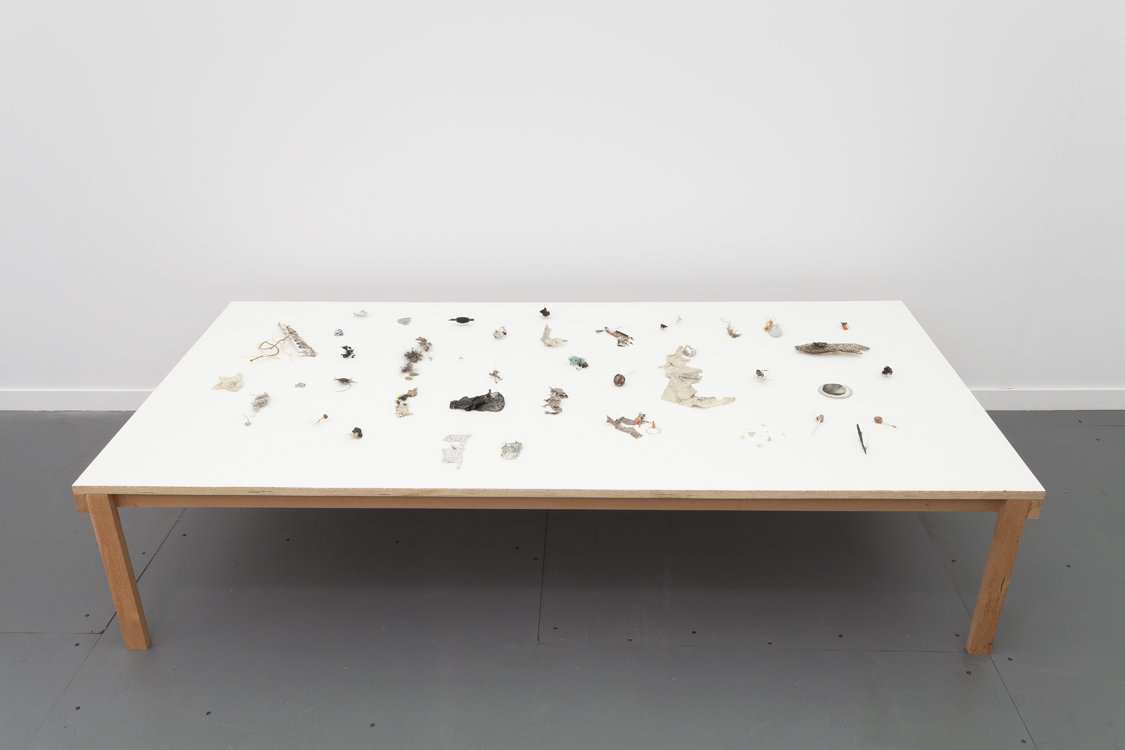 Then you see Yuji Agematsu’s obsessive collection of very specific detritus at Real Fine Arts. The artist finds lint, cigarette butts, chewed gum, paper bits, pins, and hair on a match from the cracks and crevices of the New York City streets. At Frieze, he places them in a booth as Linnaeus may have arranged his botany specimens. Your eyes zoom in and out of these fascinating objects as you explore their psychic realities and compare them to your own. Every fragment of this booth recalls a moment past, but these things, the ones that end up in your pocket at the end of the day, that accumulate on your floor like Kafka’s Odradek, are given an important role in the play of life. There’s something comforting about all these objects because you see them all the time. Today, at Frieze, you are reminded of their importance. Like the primitive noises in Ian Chen’s video, you become familiar with lint, hairs, and cigarette butts; they have become signifiers of your culture, the language of your civilization. In the midst of the big fair, where the white, bright tent makes everything shine, these little relics of daily life help you forget about where you are for a few minutes, making you aware of the autonomous world of things.