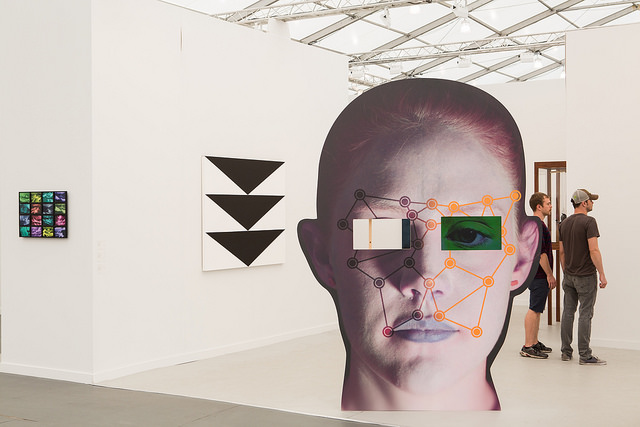 Originally an annual art fair held each fall in London, Frieze expanded to New York in 2012 and found its home on Randall’s Island, a 520-acre Manhattan annex with a rich history of sprawling cemeteries, psychiatric asylums, and lush picnic grounds. Frieze New York now provides New Yorkers and visitors alike with the perfect excuse to venture into the unknown in the quest for things to look at.

Frieze showcases an astounding 190 galleries from 33 territories within an ominously large white tent on the East River waterfront. Recovering gambler and current New York art dealer Alexander Gray describes the bright, daylight infused exhibition space as “the only place I’ve been to since Atlantic City where you can spend an exorbitant amount of money and still know what time of day it is!”

An eyewitness on the Frieze-bound fairy captured a drowning Sunday Edition correspondent, Jack Chu. Mr. Chu, 43, was reportedly trying to access the fair for free by attempting to swim in through the service dock. A veteran writer for SFAQ, Mr. Chu is said to have risked his life to attend what he referred to as the “Two Trains and a Boat” art fair, to which his managing editor neglected to provide him with a valid press pass. He is in stable condition at Bellevue Hospital.

In Kris Lemsalu’s egg crate bed project, she’s hired an NYU sophomore proficient in the art of blacking out in public places as her model. Repurposing a hand-me-down throw rug, her self-destructive muse will, to familiar disappointment, wake up Monday morning still alone and with a nasty hankering for an egg-white omelette.

In memory of the late artist and filmmaker Dean Dempsey (1986–2014), Kader Attia creates a lifelike replica of the artist’s studio regime in an installation piece entitled Halam Tawaaf, 2008.  Mr. Dempsey was last seen riding alone on the Wonder Wheel in Coney Island with a crazy straw and a 24oz can of purple Four Loco.

For those burdened by the intellectual challenges of contemporary art is this velcro ramp. Entitled The Power of Physics, this piece raises the bar to its lowest possible denomination. A real mind-bender and interactive activity for your visiting aunt who will giggle herself senseless by her inability to readily move.

By the time of publication, Frieze New York is facing a class action lawsuit by 248 individuals claiming to have contracted bed bugs, athletes foot, head lice, and/or stage-2 scabies from this painterly rendition of an airport massage chair. Entitled Happy Ending, the artist is also facing a separate class action lawsuit from mostly middle-aged men for false advertisement and a potential breech of contract.

Back on the mainland is New Art Dealers Association (NADA), a unique and innovative art fair that operates on a non-profit model with a focus on “showcasing mostly new art [and] celebrating a few rising talents from here and there.”

Always prepared, Rose Eken’s Carry All demonstrates the remarkable ability for women and queens to cram and carry anything and everything that might be of some use at some point throughout the day.

A self-proclaimed “connoisseur of nausea”, Johnny Abrahams offers up a new diptych aptly named Car Sick (left) and Sea Sick (right). Sunday Edition phoned him this morning but Mr. Abrahams declined to comment further, only to say “everything is spinning” before dropping the receiver and apparently dozing off to what sounded like running water.