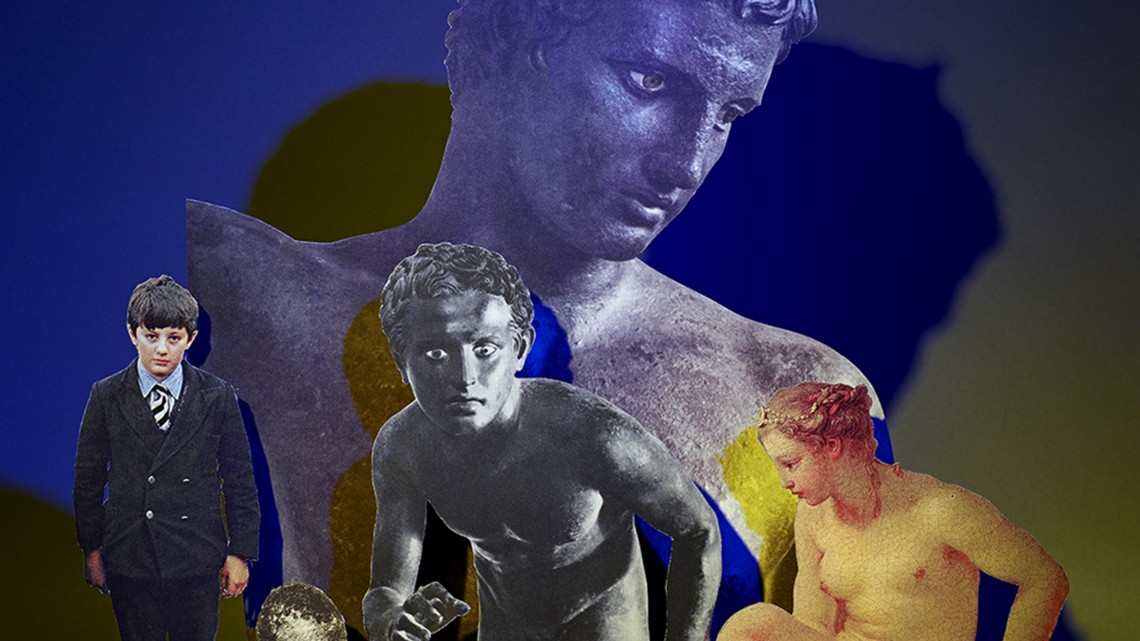 Pier 24 Photography is a historic waterfront warehouse, which now houses the Pilara Foundation Collection. Located directly under the Bay Bridge, Pier 24 is free and open to the public and has mounted one show, featuring both loaned works and photographs from the collection, each year for the last six years. The current show, Secondhand, is curated by Pier 24’s director Christopher McCall. Through the eyes, hands, and imaginations of artists and curators, Secondhand follows the thread of vernacular photography through collections of found photographs featuring the sober, mid-19th-century photography of landscapes and portraits influenced by European painting and Victorian explorers; the effervescent and freewheeling snapshot culture created by the affordable and easy-to-use Kodak camera; art photography, art magazines, postcards, experimental films and video, and installation art; the Internet platform Flickr, Google Street View; and new digital editing tools to form a poetic narrative of chance and intention in works that stretch the boundaries of contemporary photography and repurpose found photographic images. 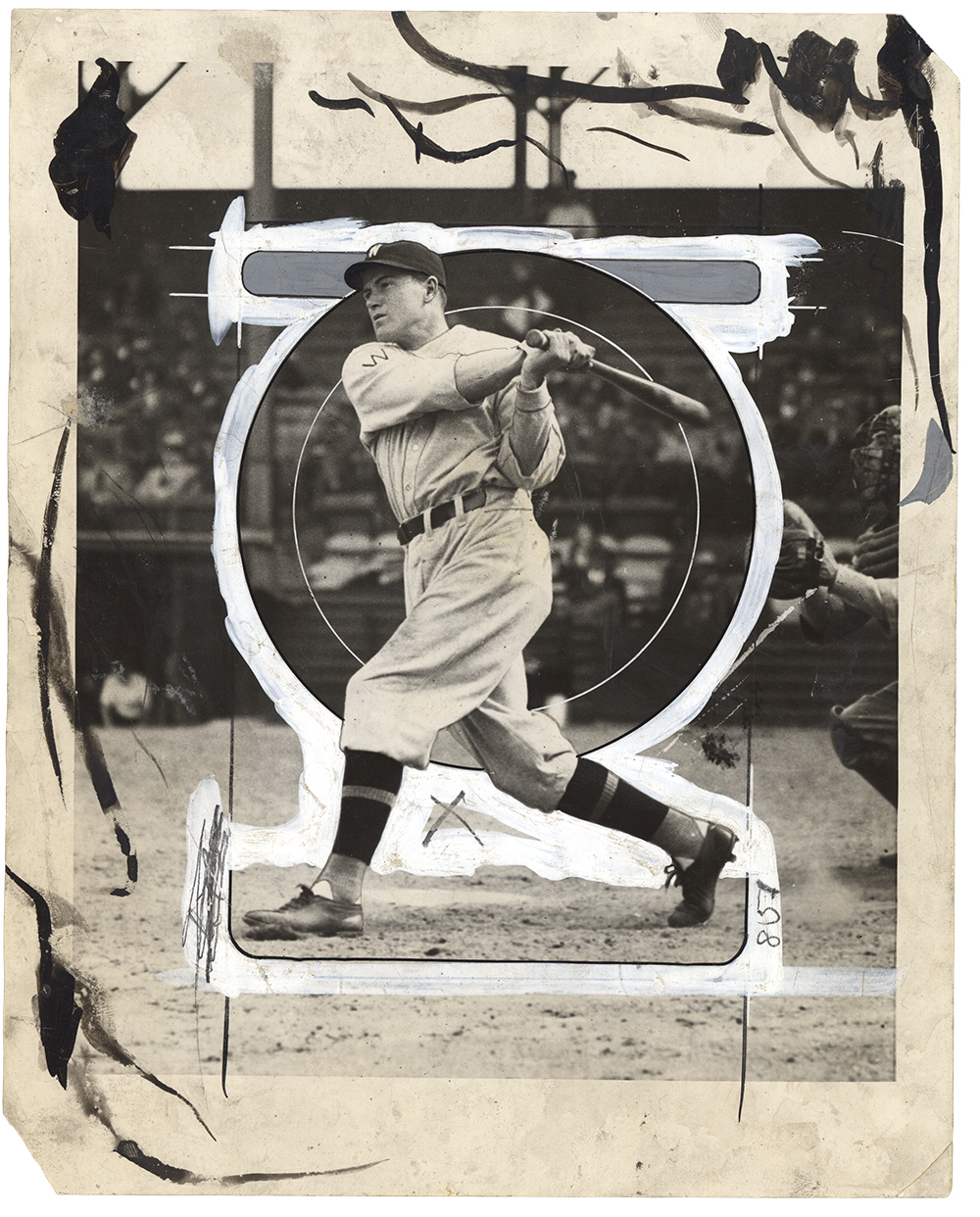 Located in the first gallery is Richard Prince’s reproduction of the Marlboro Man advertisement, a collection of factory worker identification badges, and John Baldessari’s conceptual photomontages from advertisements in which white orbs replace heads or the people are removed from the image entirely. A quote on the wall by Baldessari states, “I really don’t think images should be owned, including my own. If it’s part of our world, it’s like owning words. How can you own words? It’s just stuff to use.” 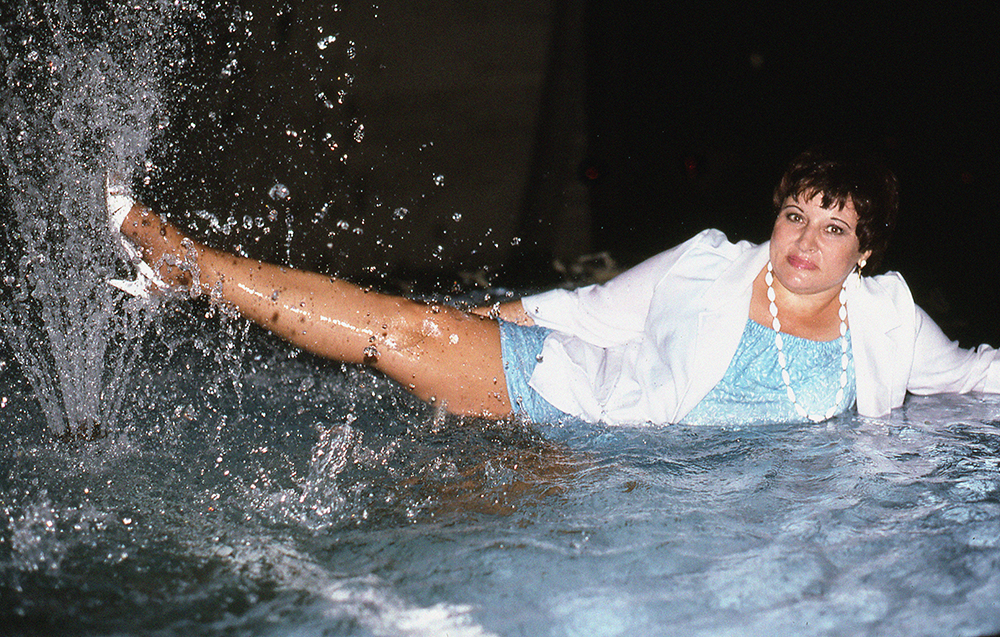 Amsterdam-based Erik Kessels’s work fills two large rooms and two smaller ones. The first large room is titled in almost every picture. Found photographic images are drawn from his personal collection and set up in relationship to each other on opposing walls, and in the middle, anchoring the room, is an installation of large photo cubes of blown up snapshots. Going counterclockwise around the room, the first wall features enlarged found color snapshots from the ‘60s of a black dog and its owners inside and outside their working-class home; a series of found color travel photos of a solitary voluptuous wife taken by her husband in the ‘50s and ‘60s on European vacations; a series of lovingly made portraits by Hironori Akutagawa of his pet rabbit, Oolong, that has a remarkably flat head, which supports a host of everyday objects: a waffle, a pepper, a tea pot, a toy car, etc.; a series of haunting black and white pictures of a pair of young women—fraternal twins—in Barcelona before and during the second World War; and covering an entire wall are 61 photos of a Dutch woman firing a rifle in a carnival shooting gallery from age 16 to the present, interrupted only by World War II. The pictures were generated by a mechanism that triggers a shutter when the target is hit. On the next wall in backlit light boxes are deer in the wild taken from an Internet hunting site. In an adjacent small viewing room is a video of continuous stills (which Kessels first found on the Internet) of Valerie by her husband, Fred: she is stylishly dressed but always wet, standing next to a fountain, or waist deep in the ocean, or floating in a swimming pool, or in a bath tub. It is a pleasantly erotic parade of endearing portraits that reminded me of Indian musicals where the lovers meet and a monsoon suddenly erupts leaving them completely soaked­. Kessels’s installation makes us think about the relationship between viewer, curator, subject, and the photographer/artist. 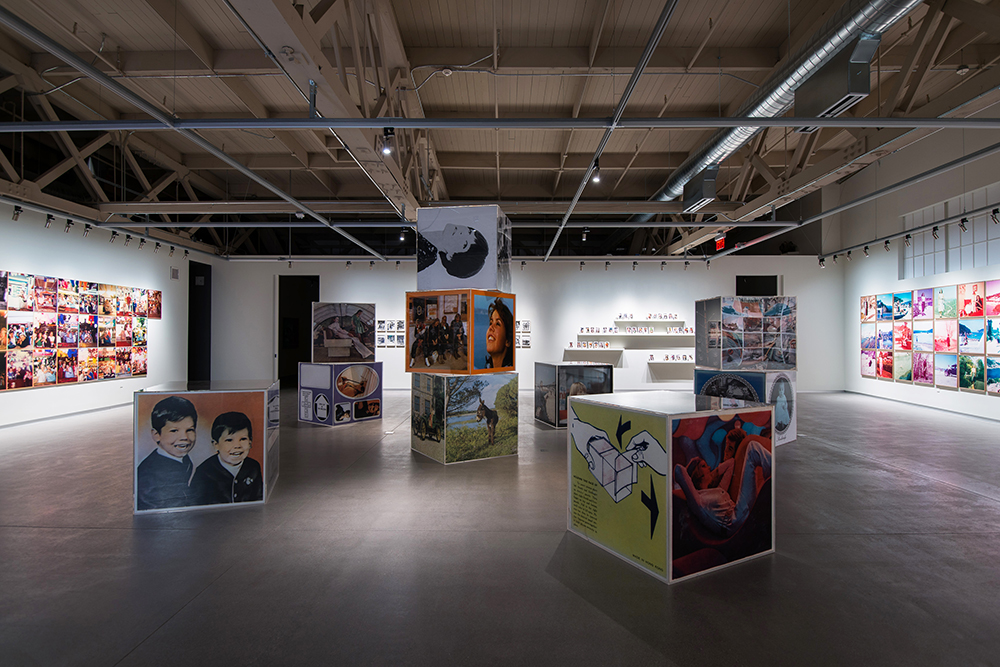 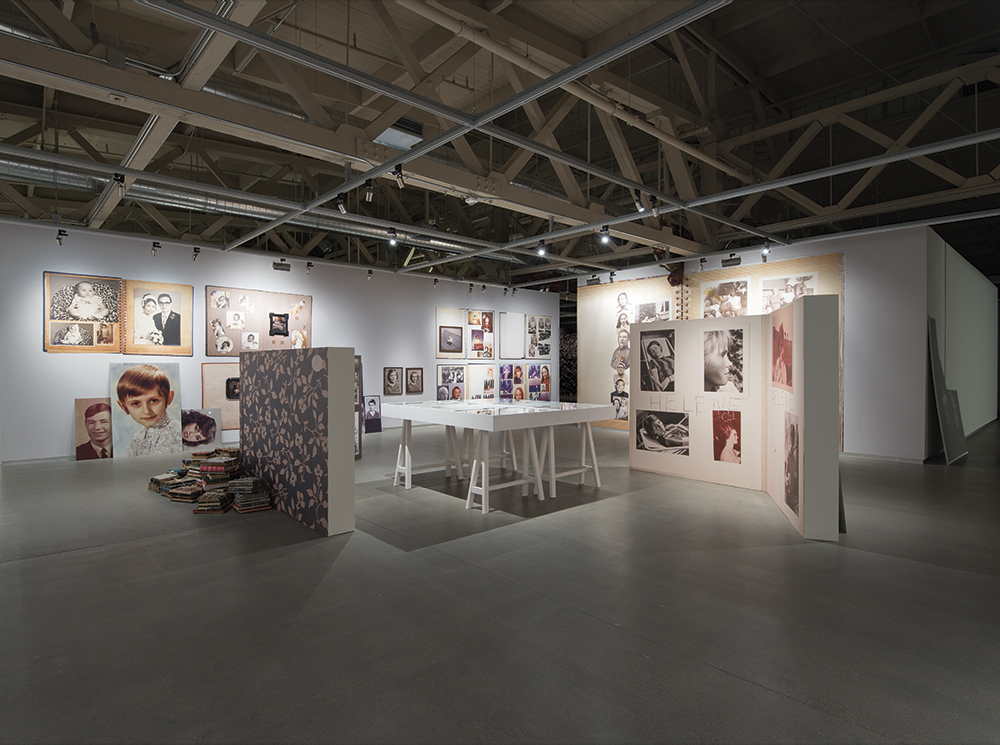 Album Beauty, Kessels’s second large room, has piles of abandoned family albums that are stacked next to large, freestanding walls printed with images taken from the albums. Open albums in glass cases display photos like butterfly specimens, and are evidence of the international middle-class obsession with recording family life. The beautifully worn albums include forgotten family histories from India, Asia, and Europe. Separate, unrelated images are enlarged and turned sideways or upside down or leaned against walls. Since we know nothing about the histories of these families, we need to rely on the content of the curated photos that demonstrate Kessels’s sympathies and aesthetics. Nearby in a small room is another installation, 24 Hours in Photos, with giant piles of thousands of snapshots culled and printed from 24 hours of Flickr uploads. The overwhelming care and weight of memory in the albums, enhanced by Kessels’s sensitive curation, contrasts the visual quicksand of images he downloads from Flickr. We are encouraged to walk on these prints, which suggests that we are entering into a new era of remembering and forgetting. Family albums are no longer an intimate and private affair but are posted on web platforms in the public domain. Kessels said by printing 24 hours of Flickr he imagines drowning in glut of representations of other people’s experiences. 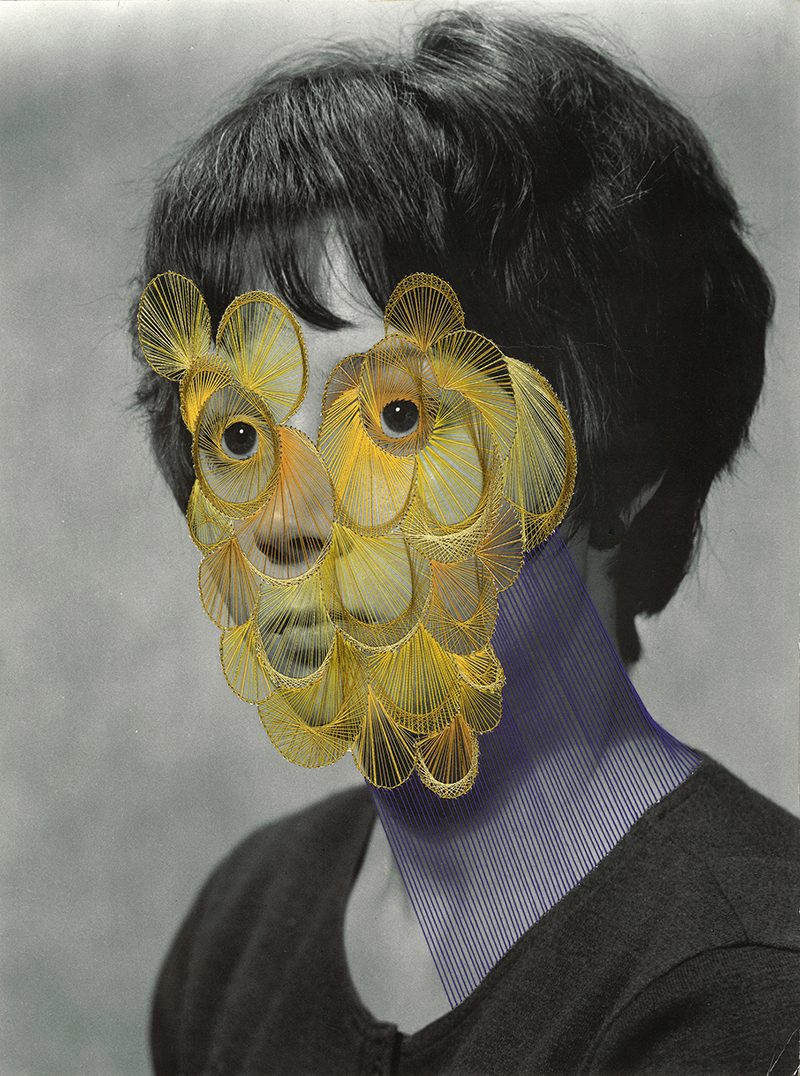 Italian artist Maurizio Anzeri’s has beautifully embroidered found vintage photographic portraits of individuals and wedding couples. He covers their faces and clothing with fanciful stitching, drawing on the spirit of surrealism and the Spanish convention of embroidered postcards of bull fighters and majas, examples of which are shown alongside his work. Perhaps Anzeri is inspired by Francisco Goya’s depictions of majas and majos, members of the lower classes who used their extravagant clothing to show their individuality.

Horizon/s is a series of overcrowded, garish, but strangely beautiful photomontages created by San Francisco artist Matt Lipps. Based on magazine images from Horizon magazine, a bi-monthly hardback arts journal first published in September 1958 and ceasing production in 1989, Lipps’s images are a remix—a cultural grab-bag of images from beloved museums’ collections to images of ordinary people. And in this remix he manages to reinvent their context and meaning. 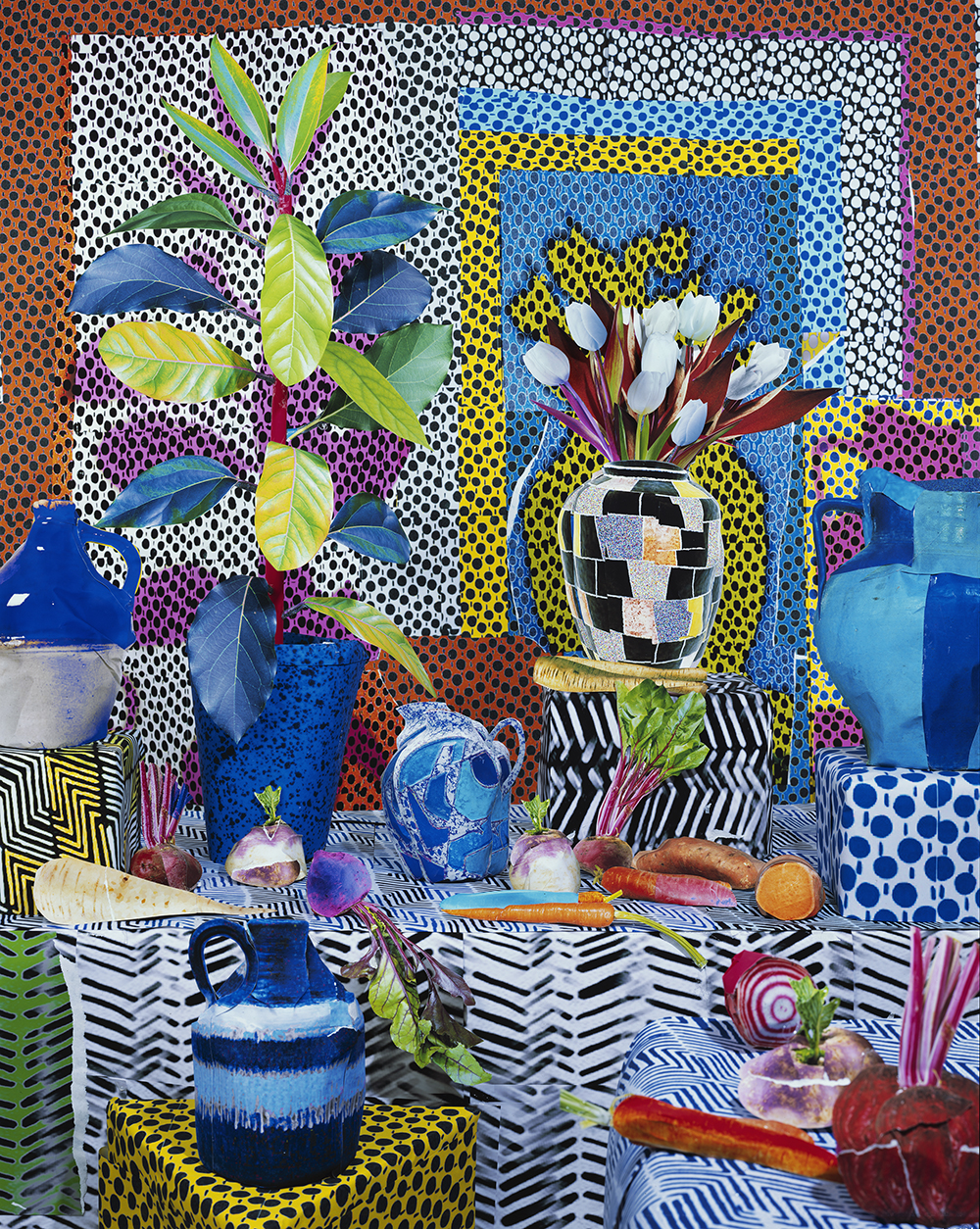 Daniel Gordon’s inviting Matisse-like photos are a riot of colors and patterns. Printing and assembling images he finds on Google, he creates three-dimensional, life-size tableaus, which he photographs in large format with a 4 x5 or 8 x 10 camera creating lively and bold photographs.

Berlin-based Viktoria Binschtok’s intriguing World of Details is based on images she finds on Google Street View. After finding an area of interest, she then searches out the physical location and photographs it, creating a poetic and intimate afterimage. World of Details juxtaposes Google Street View’s grainy, nonspecific image, which the artist has converted to gray scale, against a color photo shot by Binschtok. For example, after identifying where in New York City a policeman is standing in front of a doorway, Binschtok shoots her own color image of a golden door held open by a banquet chair. 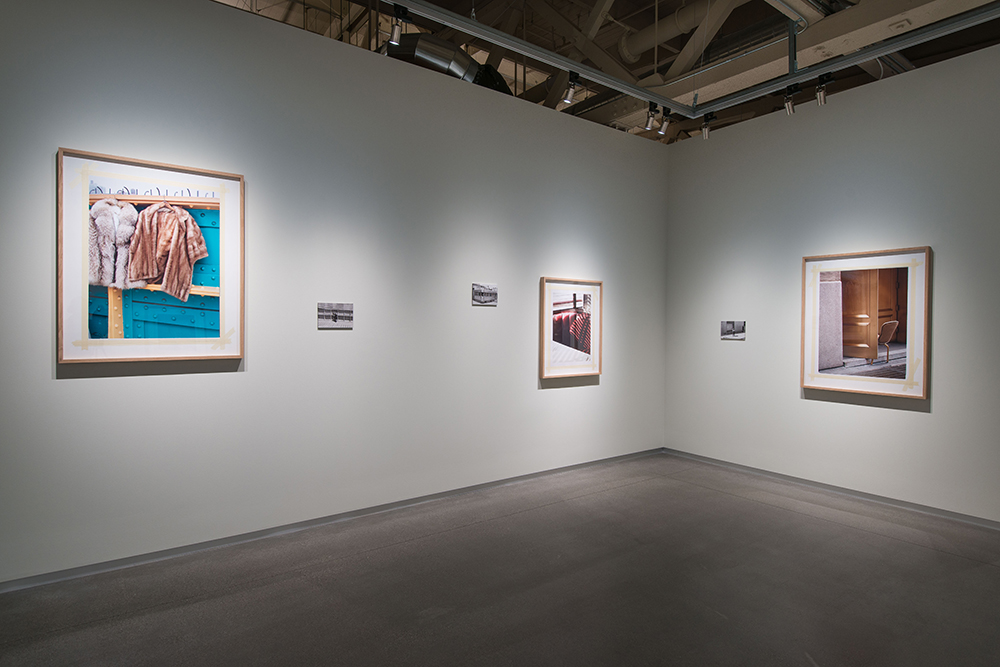 Pakistani artist Rashid Rana says he made a conscious decision to borrow everything, starting from the images to the titles of the works. In Secondhand he creates several large photomontages by fragmenting crowd and protest scenes into hundreds of squares, then reconstructs them to create an entirely new image. The most intriguing one for me was a giant reproduction of David’s Oath of the Horatii covered up or obliterated by a mosaic of tiny jpegs of street signs written in Urdu, obfuscating everything but the men’s white legs and feet. American Hank Willis Thomas’s politically charged work mixes found images with heavy black architectural frames once used as commemorative flag carriers for fallen soldiers and service men and women, whose bold patterns and shapes read like stained glass and function as a kind of window into the lives of child laborers and Black Americans.

Joachim Schmid received negatives from a portrait studio that had been cut down the middle. In Photogenic Drafts, he reconstructs these found portraits of middle-class people by splicing unrelated halves back together. I like the simplicity of the idea and it reminded me of the surrealist parlor game exquisite corpse, where unlikely parts make a whole. These images are displayed alongside early press portraits that are marked with editing lines for the half-tone process making it possible to reproduce the image in ink, which are beautiful images in and of themselves. 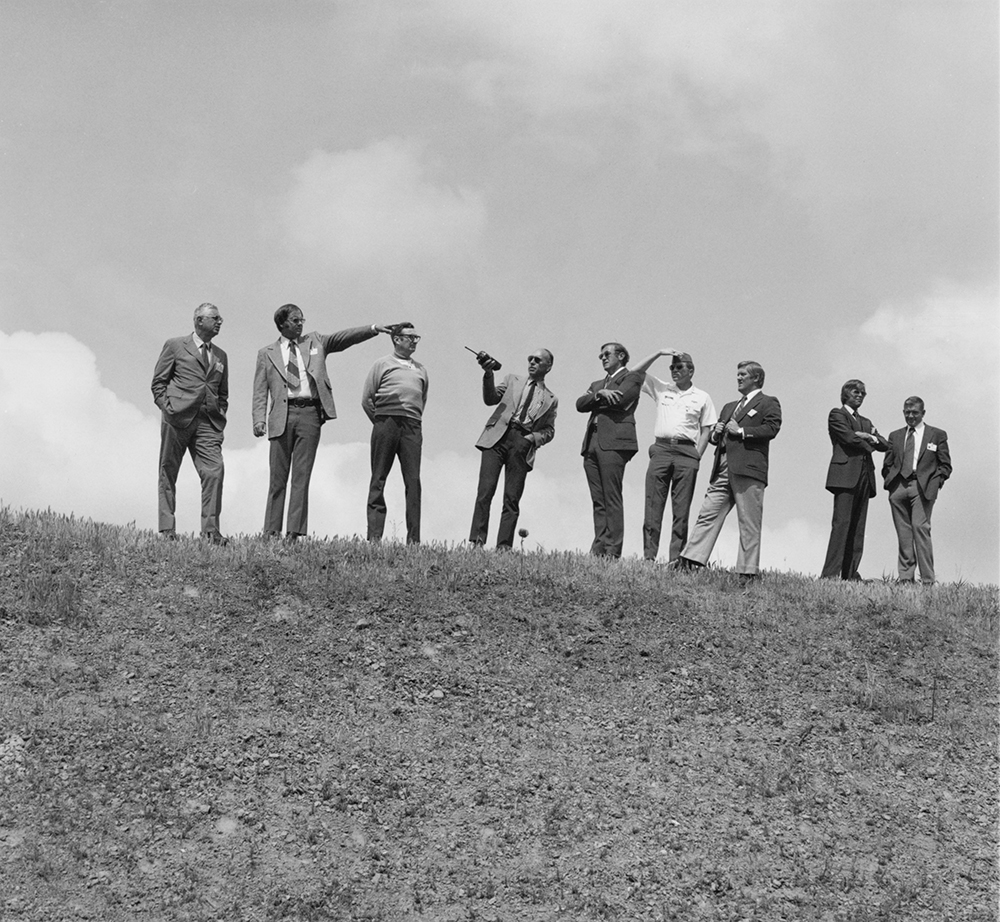 In Evidence photographers Larry Sultan and Mike Mandel sorted through thousands of images in private and public collections, including the NASA Jet Propulsion Laboratory, the Bechtel Corporation, the United States Department of the Interior, and the San Jose Police Department. Of course, this was the ‘70s and pre-Edward Snowden, and Evidence is a series of carefully selected black and white photos chronicling both corporate and governmental thinking about the future of science and technology, and is sequenced into an exhibition that occupies one of the rooms in the gallery.

Melissa Catanese’s evocative Dive Dark Dream Slow is divided into two rows of curated photos above and below the line. Her selections from the collection of Peter J. Cohen are an intuitive journey through unrelated images. It reads as a snapshot version of Maya Deren’s experimental film Meshes of the Afternoon. 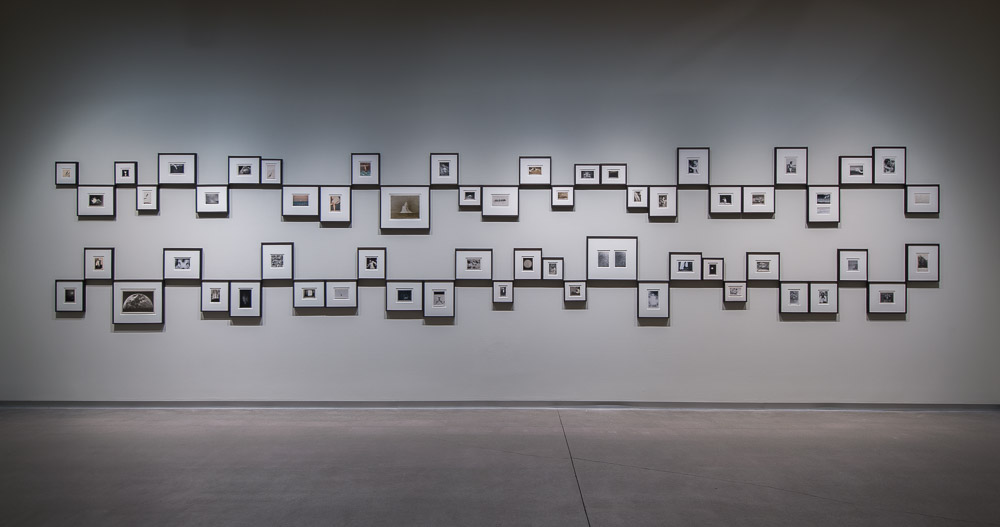 Collected Shadows fills three salon style rooms with 237 photographs from the London-based Archive of Modern Conflict. The archive, created 20 years ago, had as one of its original aims to follow the nature of strife in the world. But these days the enormous collection is now open-ended and has almost every type of photograph you can imagine, including blueprints of plants, photographs of imperial rulers from India, houses on fire, and early portraits of indigenous leaders. One wall I particularly liked featured images of parachutes, parachutists, and aerial shots making landscape into a mosaic of patterns.

Secondhand is a mind-bending show. It poses the enormous question: where is modern photography going? It celebrates the blurred line between artist as curator and artist as creator. In Secondhand, artists challenge the Western art canon, honor vernacular and popular culture, chase the poetic, hold onto the heroic, protect the intimate, and embrace digital culture. So where are we going with all this? Hopefully we are exploring new worlds alongside Charles Darwin on the HMS Beagle, inventing new vocabulary to describe the journey in an ever-evolving visual landscape.