Much Ado About Marcel: Julian Wasser at Robert Berman/E6 Gallery 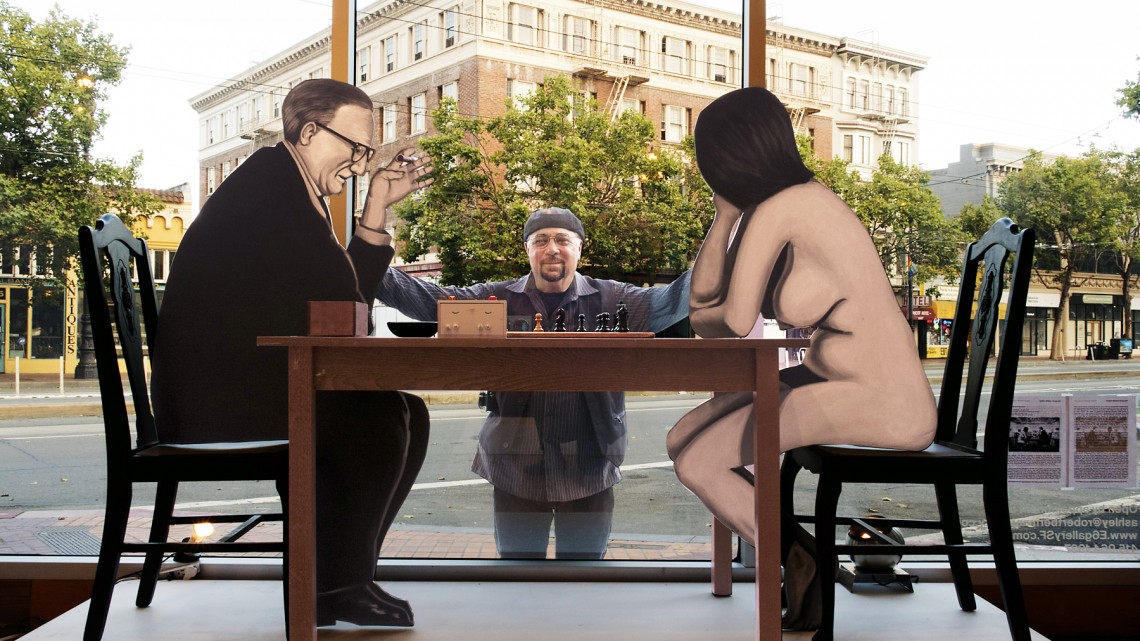 Much came before and more was to follow, but a pivotal swing in the course of West Coast art history occurred during Marcel Duchamp’s first American museum retrospective at the Pasadena Art Museum in 1963. It was then he sat down to play chess with a naked Eve Babitz—an act that was documented by TIME Magazine-assigned photographer Julian Wasser. By leapfrogging the New York City institutional art establishment, California curatorial foresight provoked a future pregnant with conceptual possibilities escaping a purely “retinal” art. 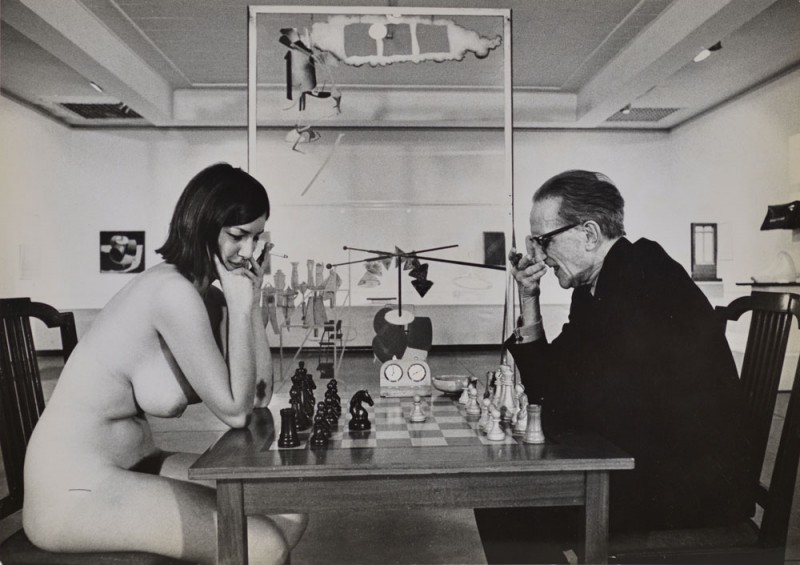 The exhibition was the brainchild of Walter Hopps, previously associated with the legendary Ferus Gallery and recently installed as Acting Director of the Pasadena Art Museum. As a teenager, Hopps had cut his eyeteeth by pestering Walter Arensberg, and scavenging the collector’s library and key works of Modernism, which Duchamp’s key benefactor had assembled and relocated from New York City. It was there a younger Hopps met Duchamp for the first time.

Ensconced in a position to offer Duchamp his first major retrospective, Hopps found that the normally-reluctant Duchamp was predisposed to accept his invitation, given the Arensberg connection and the relocation of important early friends Man Ray and Beatrice Wood to the Los Angeles area. The exhibition opening was attended by a who’s who of Los Angeles cultural glitterati, many to alter the course of West Coast art in the coming decades. Artists Ed Ruscha, Robert Irwin, Billy Al Bengston, Larry Bell, Ed Moses, and Robert Irwin attended the October 7, 1963, opening along with film star Dennis Hopper and Ferus Director Irving Blum, as well as visiting New Yorkers Bill Copley, Taylor Mead and Andy Warhol. Wasser captured them all in his photographs of the exhibition’s opening. 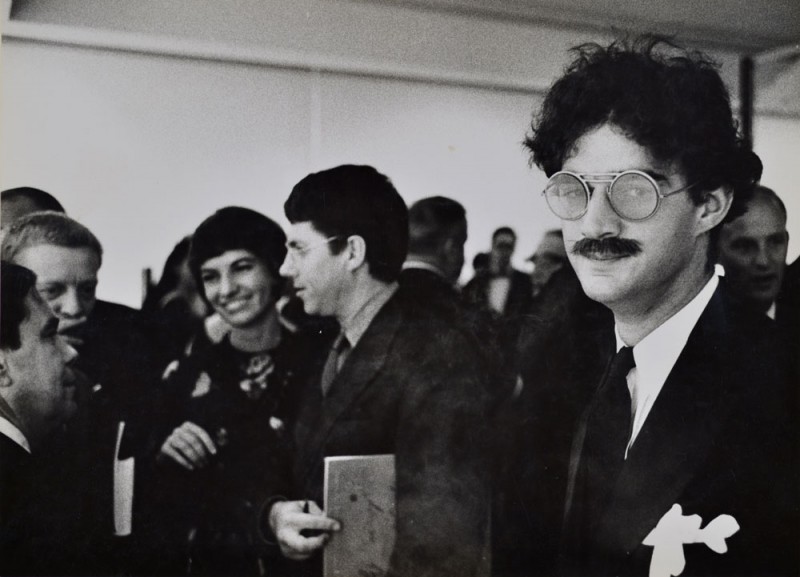 The staged photograph featuring Duchamp pondering the chessboard with a voluptuous naked female occurred a week after Marcel and his wife Teeny returned from a post-opening gambling gambit in Las Vegas—accompanied by friends Richard Hamilton (in from London), Copley (Duchamp’s henchman in assembling the materials for the still secretive Étant donnés: 1° la chute d’eau / 2° le gaz d’éclairage (Given: 1. The Waterfall, 2. The Illuminating Gas) (1946-66), Hopps, and benefactors.[1] Without Hopps’s knowledge, his current girlfriend had been recruited and agreed to take part in a staged chess match with Duchamp to be photographed by Wasser. Although TIME failed to publish the photograph, it remains one of the century’s most iconic staged works of photography. 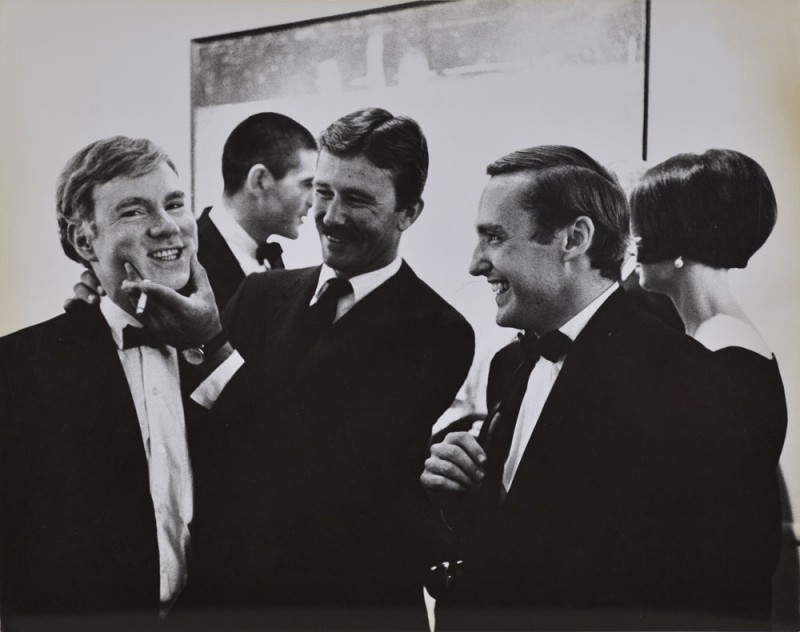 The Robert Berman/E6 Gallery exhibition, Julian Wasser: Duchamp in Pasadena Revisited, contains both vintage and contemporary prints taken during various events surrounding the Pasadena retrospective. Contact Sheet for Duchamp Playing Chess with a Nude (1963) presents the selected image and thirty-four outtakes from the photo session taken in front of the Large Glass (1915-23). Present at the exhibition opening, Wasser captured a boyish Andy Warhol having his cheeks tweaked by Los Angeles artist Billy Al Bengston, and an amused Dennis Hopper looking on. There are numerous photographs of Duchamp posed with specific works in the show, and several photographs of Hopps replacing Babitz at the chessboard, with Teeny Duchamp looking on. There are an equal number of vintage and contemporary prints available, the newer works printed expressly for the exhibition. 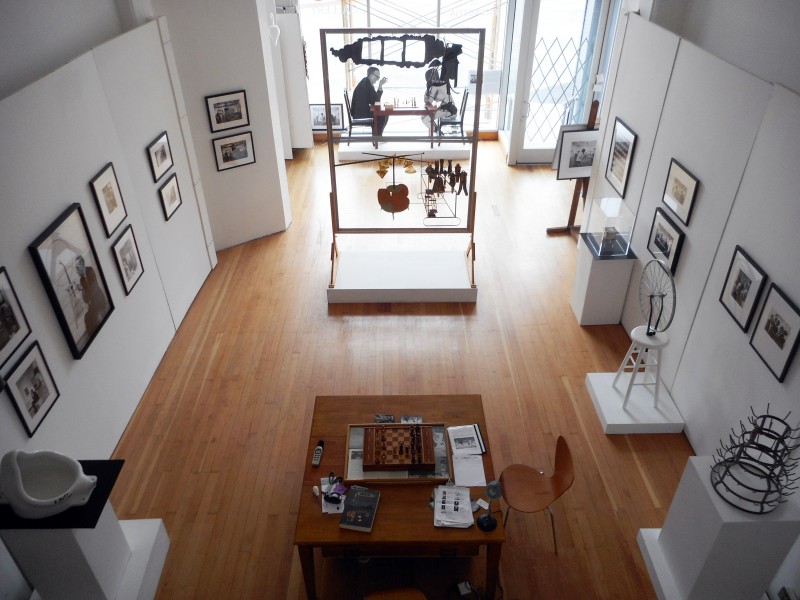 Providing a hospitable environment for Wasser’s centerpiece photograph, Berman has included several of the photographer’s contemporaneous celebrity portraits, including luminaries Steve McQueen, Lenny Bruce, Joan Didion, and The Beatles. A working colleague of Weegee, while a copy boy at the Washington bureau of the Associated Press, Wasser mirrored his mentor’s no-nonsense documentary approach to the moment. In his depiction of the festivities surrounding the Duchamp retrospective, Wasser cast an unflinching look at the faces and forces shaping an assertive and aspiring Los Angeles art community. A wider selection of Los Angeles artists can be found in the publication, Rebels in Paradise: The Los Angeles Art Scene and the 1960s (Henry Holt, 2011), featuring additional Wasser’s portraits. 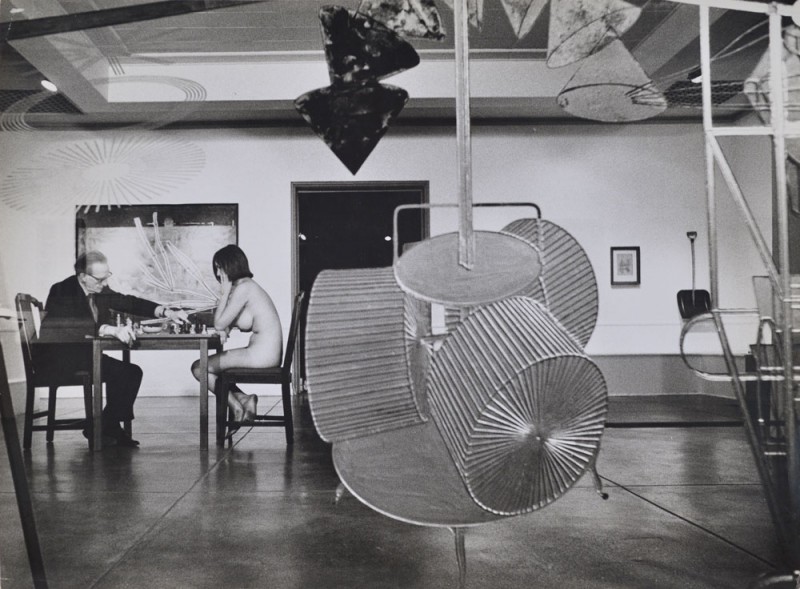 The Berman exhibition not only provides context to the famed photograph by surrounding it with alternative takes and other contemporaneous photographs by Wasser, but also slavishly recreates other objects in the gallery in which the photograph was taken. Duchamp and Babitz meditate over the chessboard directly in front of the Large Glass, flanked by key readymades including the bicycle wheel, the bottle rack, and the urinal. San Francisco artist, Tom Marioni, founder of the Museum of Conceptual Art in 1970, contributed a replica of 50 cc of Paris Air (1919), completing a full sweep of the readymades displayed in Pasadena. Fresh Window, Why Not Sneeze Rose Selavy? (1921) and The Brawl at Austerlitz (1921), are also on display, along with reproductions of Duchamp paintings, all recreated specifically for the Berman exhibition by Los Angeles artist Gregg Gibbs. A life size cutout of Duchamp and Babitz at the chessboard by Gibbs, brands the exhibition, prominently placed in the gallery’s front window. 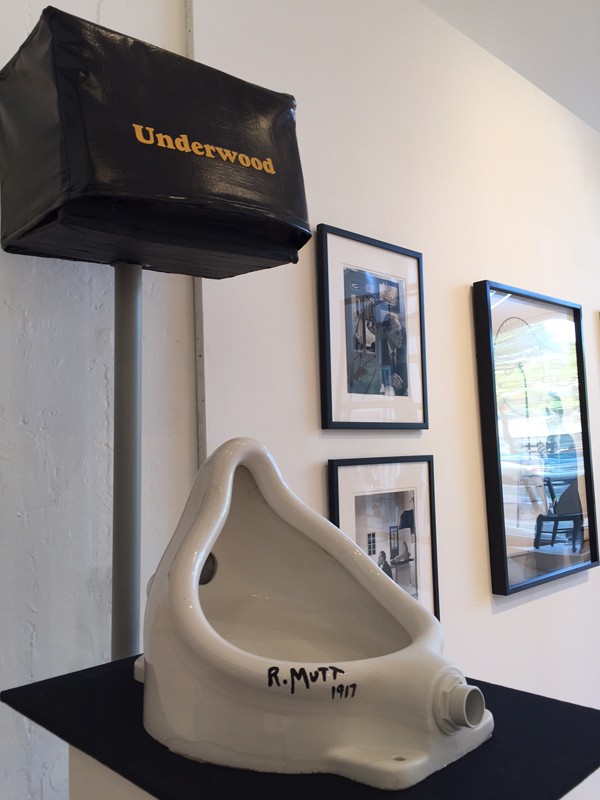 Some exhibitions are notable for their broad strokes, exposing emerging trends or highlighting past movements, while other exhibitions expound upon a sliver of experience, expanding our understanding of the moment under detailed study. By selecting an iconic image and fleshing it out, Wasser’s notorious photograph is stripped bare and revealed anew—no longer a mysterious whodunit, but a well documented moment in time presaging West Coast conceptual ascendency.

Next post The Films of Saul Levine I: Tunes of Sound and Silence at Chin's Push, Los Angeles