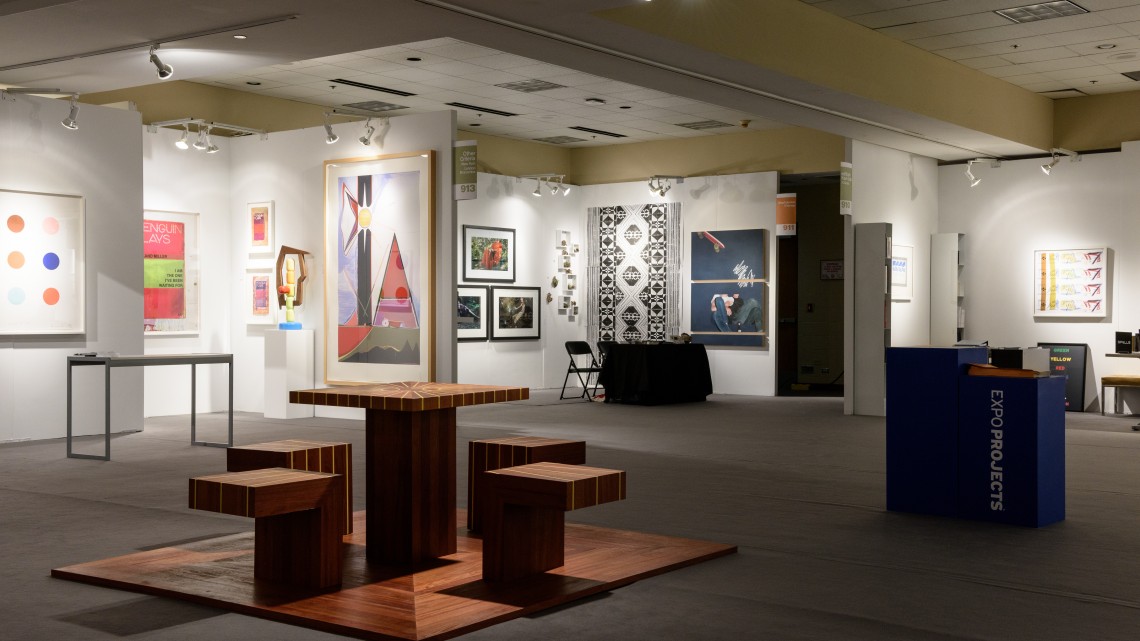 It is common knowledge that art fairs provide a significant percentage of art sales nationally and internationally to the art market. While the targeted audience of the fair is collectors, they are often not the largest group in attendance. Artists, arts professionals, critics, writers, curators, and the various cultured individuals make up the vast majority of people winding their way through booths that are selling work ranging from millions of dollars to a couple hundred. Since these non-collecting attendees are unlikely to drop $4 million on a piece of art, like Frieze Art Fair saw last May, some fairs are beginning to offer programming for the non-collectors visiting the fair with the intention of viewing new work, like they would at a museum, since buying is out of reach.

EXPO Chicago’s model introduced IN/SITU during 2014’s fair. Curated by Renaud Proch of Independent Curators International (ICI), the inaugural iteration included works by Chicago artists—peppered throughout the aisles and perimeters of the fair— that were indicated by a yellow pedestal displaying the “IN/SITU” graphic, the name of the artist, and a short description about the work. This year, in conjunction with a new IN/SITU roster, an additional program entitled EXPO Projects was introduced. Seven large-scale and performative works were installed around the perimeter of the fair hall with one outside on the pier itself.

Essentially these programs, in addition to the multiple talks offered daily, make up the fair experience for the rest of us: those seeking to stay informed on the contemporary art world or looking for inspiration without the ability to shell out major money for a piece by a prolific or up-and-coming artist. The gravity of these works also provides an elevated institutional feel, as it was a chance to view large installation works by important, established, or historically relevant artists such as Daniel Buren, Hank Willis Thomas, Edra Soto and Dan Sullivan, and Hunter Reynolds.

There was no curatorial statement for EXPO Projects, but a very clear thematic thread emerged, which focused on politically and socially engaged work. Jason Salavon’s The Master Index (Semaphore) (2015) is a sobering commentary on the current state of humanity and the things we as a global community (or English speakers at the very least) choose to research on the Internet. The work consists of two wallpapered walls, which list the most popular Wikipedia articles in English. Salavon compiled this information with the help of researchers at the University of Chicago. Highlights include number one listed as Facebook, followed by Katy Perry, Taylor Swift, Ku Klux Klan, Penis, Sex Position, Star Wars, List of Glee Episodes and over 250 more like it. The cultural significance of this list as opposed to say “Google search history” for example is that Wikipedia has become a source for quick research. While it does not claim to have scientific or at all times truthful information in its articles, it is where Internet users often turn to find information. What then, does it say about the state of culture and society in general that these topics are the most researched in the English language?

Hank Willis Thomas, Jim Rickes, and Ryan Alexiev’s In Search of the Truth (Truth Booth) (2011) offers a similar subtle approach to a social commentary—this time through the voice of the public. The work is an inflatable thought bubble large enough for a person to fit comfortably inside. Once in the truth booth the viewer is recorded on video and with audio completing the sentence “The Truth is…” with his or her own thought. Each person who enters the bubble represents themselves and the beliefs they hold creating a database of human details rather than one based on algorithms. 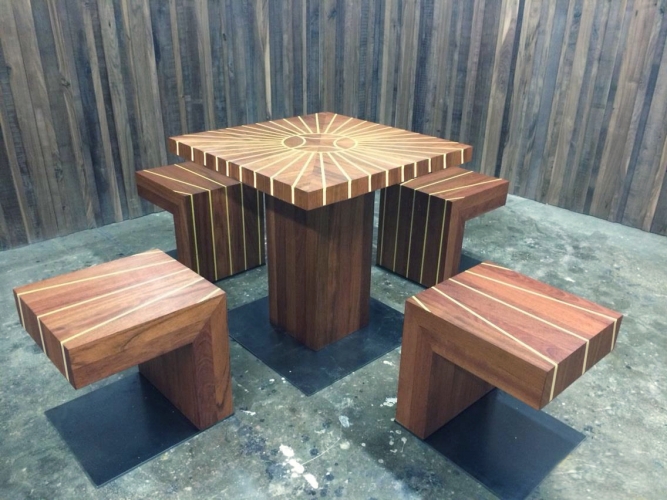 The other participatory work at EXPO was DOMINODOMINO (2014) by Dan Sullivan and Edra Soto, a husband and wife team based here in Chicago, and represented at the fair by Morgan Lehman Gallery. This work was the most socially engaging in terms of content and audience participation. Sullivan is a custom fabricator and designer, and Soto is an artist, and together they founded and run The Franklin in the backyard of their home. DOMINODOMINO is a domino table modeled after public tables found in Puerto Rico. This table is made of jatoba wood and inlaid corian in the design of Rejas, the security screens and fences found on the façade and perimeters of most houses in Puerto Rico. Guests were invited to sit at the table and play dominoes with Soto, who cheerily taught anyone who wanted to play her and her husband’s favorite version of dominoes. Something unexpected happened around this fine object, strangers learned and played a game together while the rest of the fair shuffled around them. This was a literal example of everyone bringing something different to the table, whether familial memories of playing the game, the experience of never having played the game, kids turning the dominoes on their tops to make them topple over, or wide-ranging math abilities. Chicago proves to be friendly to most, but DOMINODOMINO, lead by the effervescent Soto, provided a space for community to form inside the walls of an otherwise very exclusive experience. 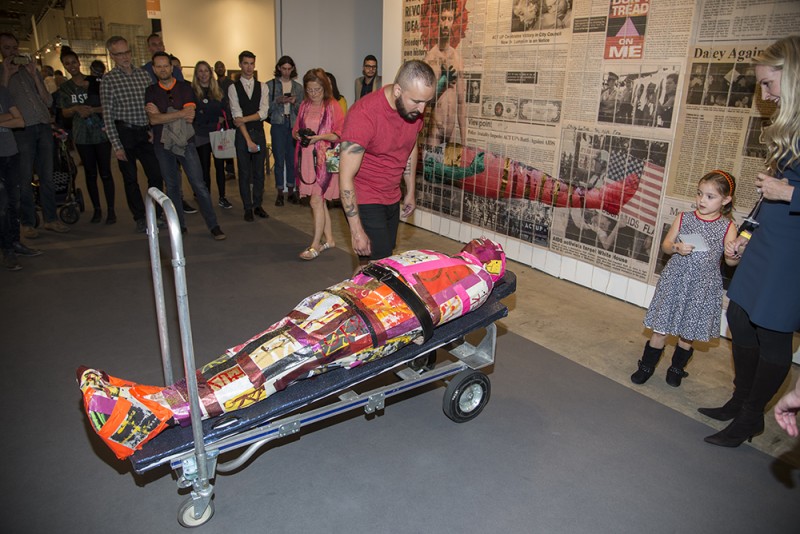 A large-scale wall piece and object from a performance by Hunter Reynolds contributed the most direct commentary of the EXPO Projects. Survival AIDS – ACT-UP Chicago – A Revolution (2015) is a photo weaving of Chicago newspaper clippings about AIDS and imagery of Reynolds’ past work exploring his experience as an HIV-positive gay man. A performance took place on the last day of the fair where Reynolds’ was wrapped in cellophane and tape, resembling a mummy. His “skin” was then shed and placed before the photo weaving. The vibrant colors used to wrap Reynolds’ body signify life and renewal, rather than a sickness leading to death. While this piece is littered with pain and struggle, there is hope in the survival, the revolution.

Works by Daniel Buren, Spencer Finch, Susan Hefuna, Sandro Miller, Amalia Pica, and Bryan Zanisnik represented strong, thought-provoking content with a clear message. The overall selection of the work for EXPO Projects was comprehensive, but I challenge EXPO to further the cohesion of the program by providing a perspective on those choices next year. Perhaps a curatorial statement is not the way to go for an art fair, but the decision to include the works they did was clearly well thought out and the public deserves to know the vision behind including these incredible artists. EXPO has acknowledged the “other” audience at the fair now it’s time to take it one step further.