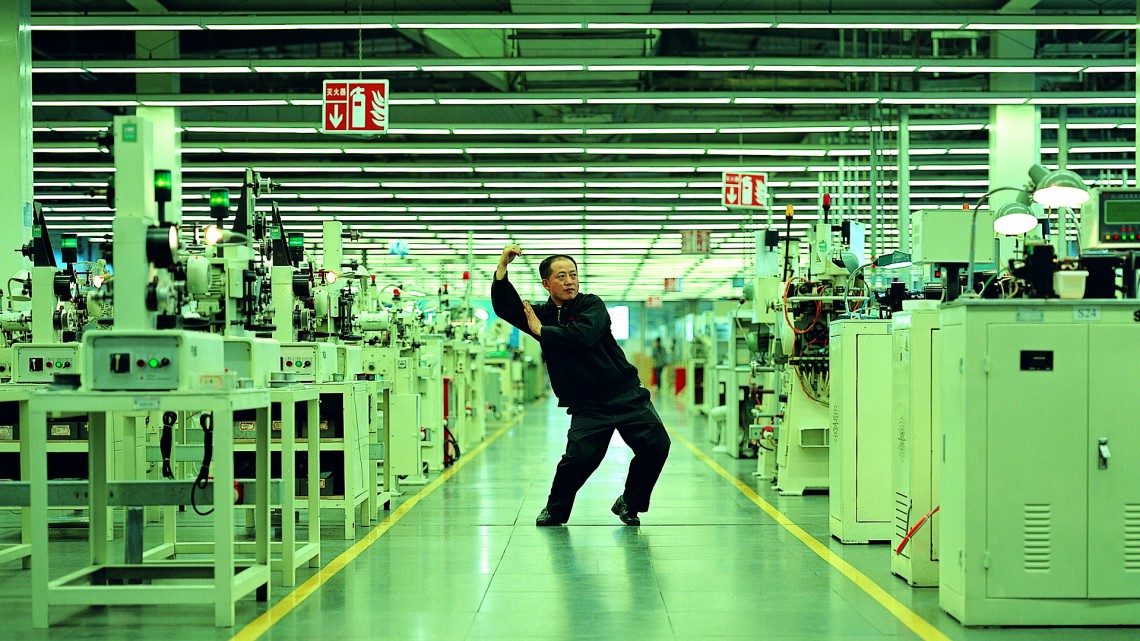 One enters a dark room. Vitrines filled with miniature landscapes carry ominous visions. Another room tells of a future filled with aimless urbanites and hungry zombies: in another, CGI-rendered cities. The more one wanders the more one sees. Each room tells a different story, yet they all seem to be the same.

On view at MoMA PS1 is Cao Fei’s solo exhibition, a collection that looks at the breadth of major works, produced by the Guangzhou-born artist, from the mid-1990s to today. Cao Fei’s style is an infusion of the grim with the humorous, crafting images and narratives that are both comedy and tragedy. Cao Fei’s work is not overtly political, but it examines the human condition amidst the swirl of change that her generation has seen. The current exhibition reflects this, offering a diverse array of borrowed visual tropes (zombies from Western media, Japanese anime, Internet videogaming) as surrogates to enter a pointed discourse of the modern. 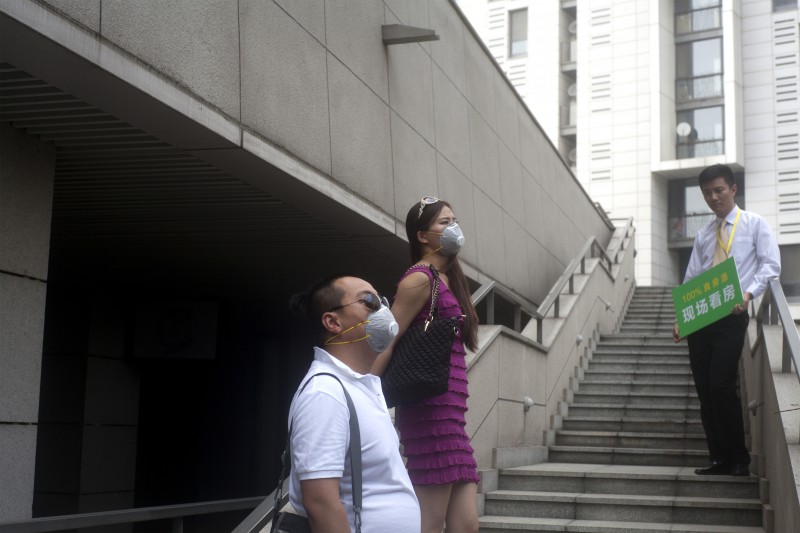 At the center of Cao Fei’s work is a negotiation with space. Since the 1980s, Chinese urban growth has been on the rise like it had never seen previously, resulting in a radical restructuring of the spaces of habitation, most dramatically evident in major cities. From 2000 to 2010 alone, urban land area in China has increased from 65,740 km2 to 89,390 km2.[1] The evidence of this is written all across China: in the growth of cities, the destruction of historical neighborhoods, the building of the highly speculative and ultimately uninhabited “ghost cities”. Cao Fei’s work is not interested in the statistics, but, rather, the human toll this rapid growth has dealt.

Her film Haze and Fog (2013) is a crawling, cinematic vision of individuals caught in the midst of group activities, yet fully isolated, eventually chased, ensnared, and violently consumed by roving zombies akin to those found within the popular American television series The Walking Dead. The spaces they occupy—the sterile, quickly-fabricated office buildings, concrete hallways, and vast, empty urban zones—carry with them an oppressive weight that seems to suck the life-force out of the occupants long before the zombies do: the individual is a zombie before any dramatized transformation occurs. It is as Wade Davis put it in his book The Serpent and the Rainbow when recounting the story of a real man who had received a zombie spell:

[The zombie] remembered being aware of his predicament, of missing his family and friends and his land, of wanting to return. But his life had the quality of a strange dream, with events, objects, and perceptions interacting in slow motion, and with everything completely out of his control. In fact there was no control at all. Decision had no meaning, and conscious action was an impossibility.[2]

Like Davis’s zombie, Cao Fei’s individuals are caught in a state of inertia. Their daily rhythms and personal interests are, as Jean Starobinski would describe, not obliterated by modernity but pushed into the background[3], as if reeling from the rapid development of urban expanse around them, too quickly to form any spontaneous group ethos or communitas.[4]

Cao Fei’s Whose Utopia (2006) confronts this theme more directly and more literally, showing workers at a lighting factory in Foshan in the Pearl River Delta region. The video shifts from documenting the production of light bulbs through a series of close-ups (components being pieced-together through a highly-automated process) to a montage of individuals in the factory acting out their dreams (one dancing dressed as ballerina, another in his work uniform performing a contemporary dance routine, to another playing electric guitar), finally ending with factory workers wearing white t-shirts that spell out “My Future is Not a Dream”. Much like the rest of Cao Fei’s work, Whose Utopia is a blend of the stark reality that faces many of China’s migrant worker population and a palpable sarcasm that scrutinizes the disparity in the socio-economic conditions of production labor and their place in global mass consumption.The title suggests the double meaning: eutopic, “good place”, and outopic, “no-place”. 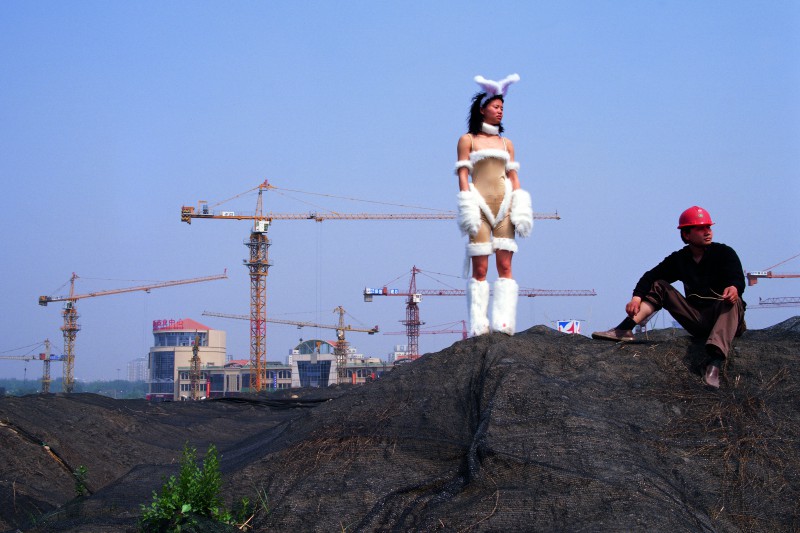 The non-place is a reoccurring feature of Cao Fei’s art, present in such works as her COSPlayers (2004), RMB City: A Second Life City Planning (2007-2011), and, most recently, her video La Town (2014). Defined by Marc Augé in Non-Places: Introduction to an Anthropology of Supermodernity, place and non-place are like opposed polarities: “the first is never completely erased, the second never totally completed.”[5] In Cao Fei’s work, this manifests physically, virtually, and psychologically, with each work acting as a vignette of a society in the midst of rapid change. In all three pieces, any sense of a singular local identity is destabilized by the influence of an emerging global self. In COSPlayers, performers dressed as popular Japanese anime characters roam, run, and fight throughout a developing city. The performers’ appearance mirrors their surroundings: both are being influenced and re-constructed in a foreign model. The result is awkward, surreal, and the shape of things to come.

In RMB City, Cao Fei creates a virtual world within the online gaming community of Second Life, made up of an amalgamation of modern (if not stereotypical) Chinese architecture, lumped together to appear like a garish skyline of a supermodern Chinese mega-metropolis. Yet, while RMB City is a space in which Cao Fei and visitors can interact, these spaces are not real. Much like the inorganic and highly manufactured spaces of China’s largest urban centers, RMB City is merely frequented and marked by the intersection of moving bodies. 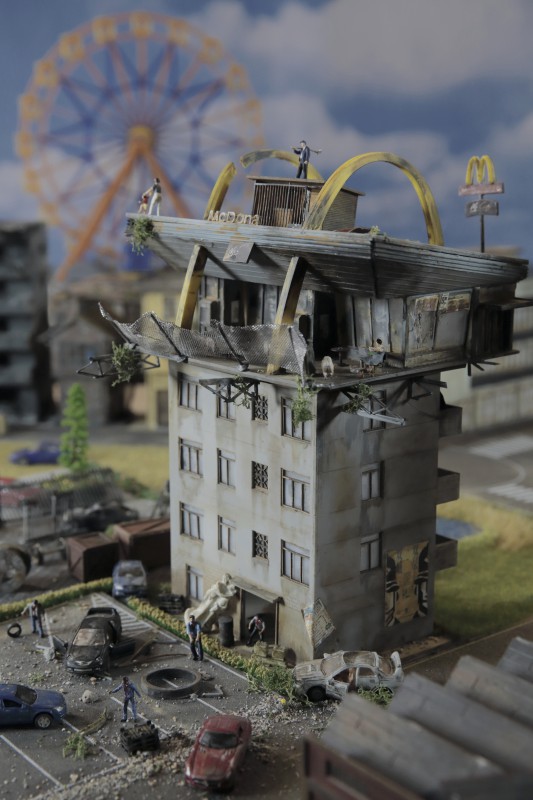 In La Town, Cao Fei uses hundreds of miniature figurines, vehicles, and buildings to create small dioramas, each telling the story of a society in the grip of a post-apocalyptic event. The film depicts either a town in the United States or Europe, and the figurines were all purchased on the Chinese e-commerce site Taobao. This approach is an imbedded commentary on the ubiquity of Chinese-made products and the prevalence of Chinese industry in the shaping of global urban spaces. By exhibiting the dioramas from La Town, MoMA PS1 further emphasizes the notion of non-place as each scene is displayed independently, deconstructed and decontextualized from the narrative that they are shown within the film. As such, they are, in relation to the film, presented as a sort of detached place of memory.

Cao Fei’s works depict spaces that expose the tension between the creation of the modern cities of China and those who dwell within them. Through a playful use of visual tropes and often humor-laden narrative strategies, the stories Cao Fei presents are also deadly serious in their implication: modern space is alienating, producing a society that is rootless, their connection to the history of their locality removed, replaced by the homogeneous veneer of the modern city. The ever-present theme of a civilization caught in the wake of its own destruction is, not surprisingly, central to many of her works, as this act of uprooting is, in itself, an act of transformation. Much like Hobbe’s “leviathan”, which, if left unchecked, could devour society[6], or Baudelaire’s “spleen” of Paris, which he ascribed to the sensation of melancholy without cause, a mental and spiritual jaundice qualified through a body politic[7], Cao Fei imagines the human condition (body and soul) as inexorably linked to the state of their surroundings. The broken earth of the construction site, the cold concrete of new structures, the swirl of the factory floor, the digital cityscape are, for Cao Fei, a new (and very real) stage for her dramas to play out: a new world in which its actors are still unsure how to proceed. 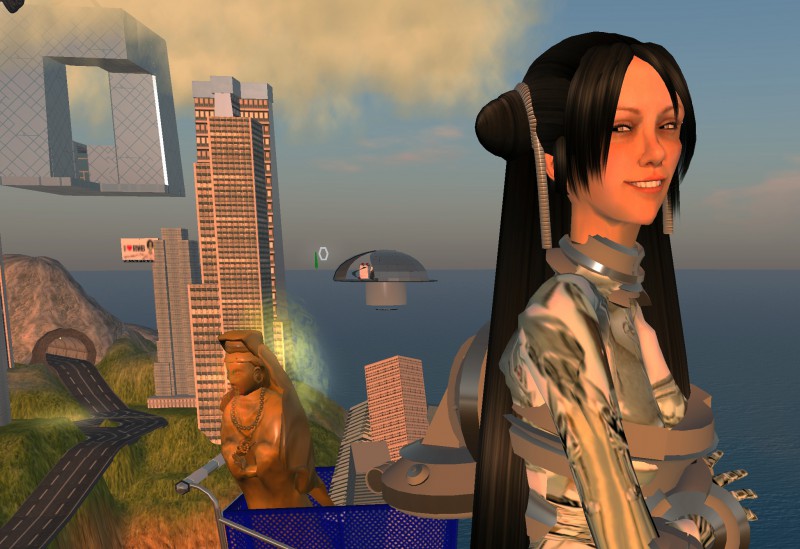