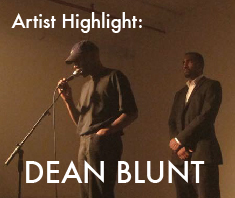 The Redeemer (an excerpt)

One of the most intriguing performances of the year refused to be either a concert or performance art, and we didn’t see it live. It involved a microphone, a spotlight and a music track. Dean Blunt’s July 19th performance at Artists Space in New York and viewable on Youtube was a radical redefinition of what constituted a live performance. (1) Preceded by over ten minutes of white noise (possibly the sound of rain or a train) in a pitch black gallery, the show “kicked off,” if you will, with a loud synth melody as the light slowly rose unveiling a mic stand on a small platform, Blunt pacing, and another man in a suit standing arms-crossed a few feet back.

As the synth melody played, Blunt eventually approached the mic and the beginning chords of “The Pedigree” from his album “The Redeemer: began. As the music for “Dread” began an answering machine message played with a woman’s voice: “It’s me…look, can you stop calling me…”

There was no band, no instruments, just Blunt, with a black baseball cap tugged low to cover his downcast eyes, pacing and fidgeting, listening to the music with the audience between vocal parts. A commenter on YouTube joked, “The artist is present.” But in a sense beyond the obvious reference, presence is indeed what Blunt offers. The performance lacked nearly all the trappings of what is expected of a concert, feeling instead confessional, simultaneously less and more live.

Blunt’s strange performance befits his 2013 album “The Redeemer” (and the follow-up “Stone Island”) (2). Inventively appropriative yet deeply affecting, “The Redeemer” presents a new model of “the personal record.” On “The Pedigree,” over strings, Blunt’s voice quietly, plaintively sings, “For me to get to know you better… there’s something I should let you know. To me you’re just another lady…” (a simple drum pattern starts) “You’re gonna have to let me go.” The album outlines a failed relationship and its aftermath. The lyrics recall R&B and folk music, but also how more aggressive genres deal with the political or personal through direct language clouded by volume. It is a cohesive, if roughshod whole. There is rawness to the production throughout, and with a quick “no new messages” recording, the album ends. 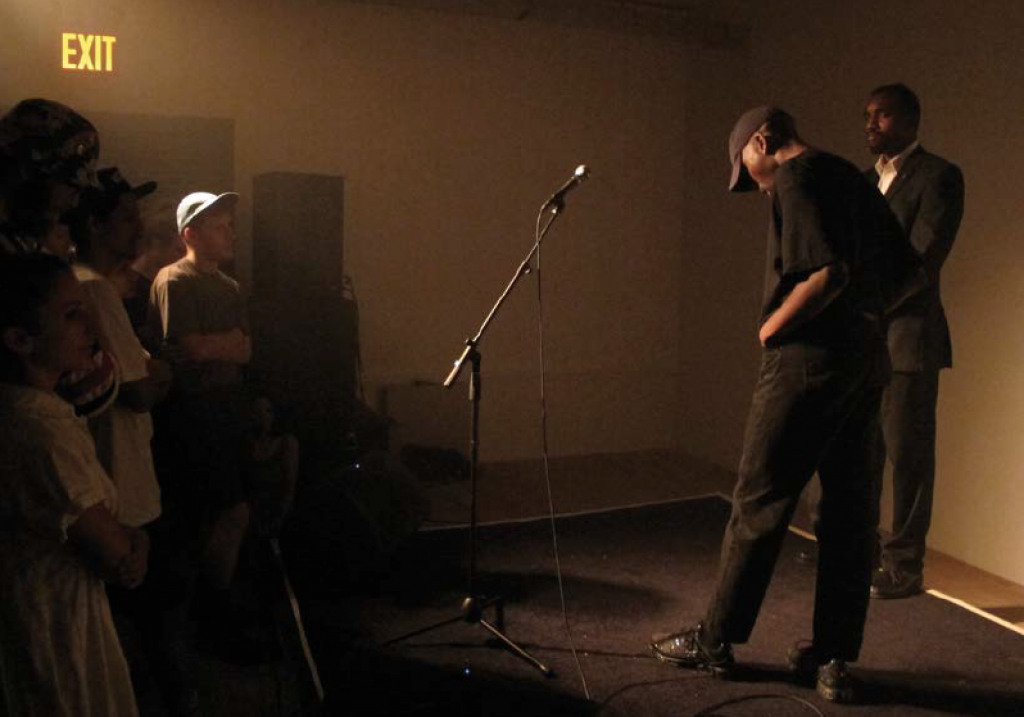 That initial string intro, titled “I Run New York” feels cinematic and heartfelt, but a little digging reveals the track is lifted, unaltered, from the beginning of K-Ci & JoJo’s “All My Life,” a saccharine R&B song from 1998. The angrily yelled “What’m I do now? Huh? It’s all fucked up now,” occurring midway through the title track is from an odd outburst in a Puff Daddy song; in the original, it seems artificial and tacked on, in “The Redeemer” the same phrase reads as intense, brutally honest expression. (3) The cut-and-paste makeup of the album risks clouding the reading of the music; Nick Neyland in Pitchfork hedges, “Dean Blunt is heartbroken, possibly.”

Any attempts at brutal, direct honesty are instantly entangled in the performance and management of identity now so commonplace; the means of offering to an audience a sort of radical sincerity, once the purview of the performance artist, are now widely dispersed, commonplace, and mundane. Blunt places an emphasis on his work being received at face value. “People wonder why nothing is interesting, it’s because they try to get a fucking answer to it, to everything.” (4) Blunt’s practice creates truth precisely by barring or complicating aspects of its inner workings.

In a video on his Youtube page titled “Casting call – Syreeta,” a woman reads from a script by Blunt; through poetic language something true emerges: “I ask, I believe, I receive (…) I walk away from that old desperate and dazed love, caught up in the maze of love, the crazy, crazy maze of love… thought it was good, thought it was real, thought it was…”

(1) The full, 40 minute performance is viewable at: http://www.youtube.com/watch?v=mSLN1yUzdDc
(2) A follow up of sorts to “The Redeemer,” “Stone” Island was released free while Blunt was in Russia for a performance. Translated from Vulna.afisha.ru: “Almost all of the time spent in Russia, I spent on this record, so I want to, and she remained in Russia, lost in Google translation. Since she was conceived here, let there remain “ http://volna.afisha.ru/archive/dean_blunt_stone_island/
(3) Hype Williams: do they ever speak the truth? The Guardian, April 5 2012

This piece was selected from Issue 15 of SFAQ.