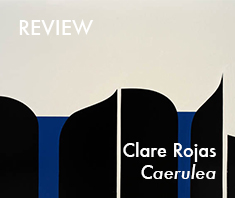 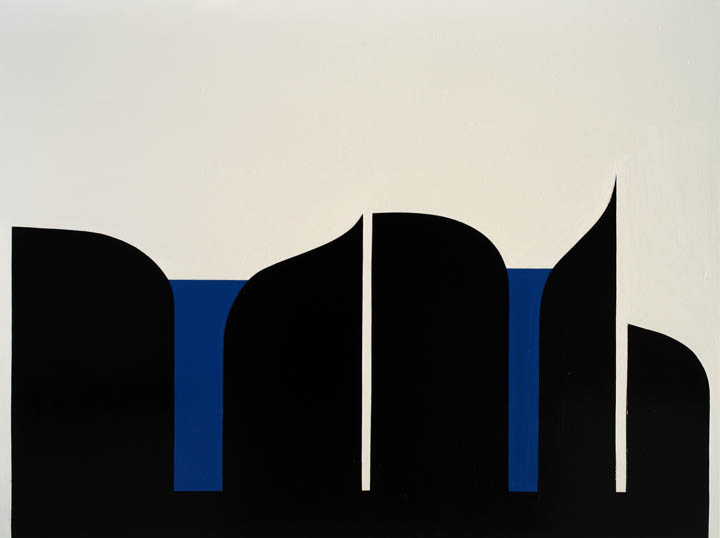 For her current solo exhibition “Caerulea” at Gallery Paule Anglim, Clare Rojas engages audiences with a new series of large abstract works. The title references flora and fauna such as passion flowers and butterflies which both share the same genus “caerulea;” Passiflora caerulea and Lycaenidae caerulea, respectively. Natural things which carry caerulea distinction share a pronouncement of shades of blue, violet, and green, derived from the Latin word “caeruleus,” meaning of the sea or sky. Floral motifs have dominated Rojas’s work for many years, but her work currently departs from these recognizable references. 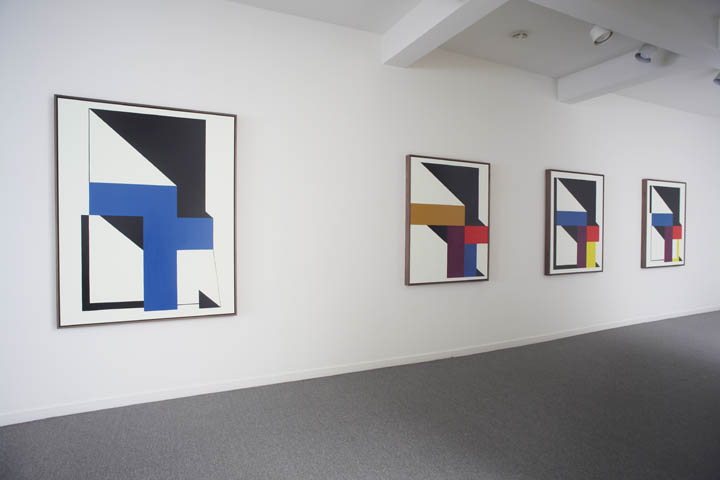 Rojas built a visual signature punctuated with motifs commonly found in folk art textiles coupled with humorous narratives of people in both comfortable and awkward scenarios such as admiring flowers or exposing their genitals. Many times her work has been displayed as industrious murals/collages encompassing entire walls or rooms, offering long-standing opportunities for viewers to peruse the varietal imagery and detail. In Rojas’s recent explorations over approximately the last four years, the representation of the body has disappeared, and formal abstraction has dominated large canvas works. Here, the details are in the artist’s hand, the evidence of the paint brush on surfaces, and the connection for the viewer can be found in developing a relationship with the singular, abstracted imagery.

The etymology of the word abstract is abstrahere, which means to “draw off.” Andrew Inkpin, in his essay The Complexities of “Abstracting” from Nature, notes that the word abstract “stands for the absence or removal of something [. . .] involving different modes of negation, different modes of ‘drawing off.’” In “Caerulea,” Rojas draws from her past influences while simultaneously investigating the complexity of shape through the formal considerations of painting itself.

Taking her use of textile inspiration into account, Rojas’s new works are particularly aligned with Sophie Taeuber-Arp, the Dada-influenced artist also known for her Bauhaus textiles. While Rojas’s earlier works share story-telling similarities to Arp’s involvement with Cabaret Voltaire and her marionettes for theater, both artists later depart from figuration to total geometry. Early on, Arp’s geometry is evident in her rugs and fabrics, which is maintained as she later shifted to large-scale paintings. Rojas’s artistic trajectory followed a similar pattern.

All of Rojas’s work in the show is “Untitled” with coinciding numerals. Void of reference, the viewer is left to take in the work as it appears before them in formal terms. A series of three works, numbered “CR1403,” “CR1408,” and “CR1413,” are not necessarily a triptych, but rather variations on a theme. Each iteration features geometric constructions of black, maroon, cobalt blue, ochre, and red, bulky rectangles with black triangles arranged over cream-colored negative space. As a trio the works span over fifteen feet of space, dominating the wall much like Rojas’s earlier mural works. The walls of the gallery separate each one, thereby locking the work into autonomous formalities. 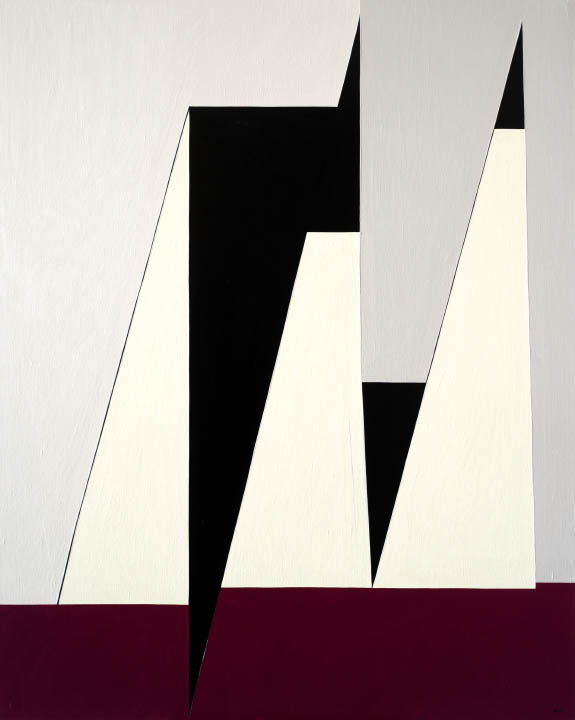 Across the way is a piece that stands apart from the others in the room for its pastel lavender-grey, delineated by delicately rendered and slightly imperfect black, thin lines atop a burgundy Brutalist plateau (“CR1404”). Looking closely, one notices the thickness of the paint, the evident brushstrokes, and the wavering hand controlling each movement. Applied with seemingly contemplative and careful strokes, the materiality of the paint renders the hardness of the imagery soft. The softness and brushwork recalls the delicacy of threads aligned and woven to create textiles. The triangles are reminiscent of Rojas’s folk influences, particularly her use of symmetrical triangles evidenced in quilting. Here the triangles are elongated and narrowed. One points down, piercing the burgundy base like a descending needle. The others ascend toward an unknown future. Recalling the title again, “Caerulea,” it seems apparent that Rojas is moving toward a realm with her work that still recalls youthful narration and representation, while dwelling in the referential and focused present.

For more information about the show, visit Gallery Paule Anglim.

Previous contributions by Leora Lutz include: