Review: How to Explain Objects to a Hare Blanket; Berlin Gallery Week 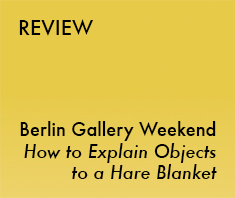 How to Explain Objects to a Hare Blanket

There is an overwhelming amount to do and see right now in Berlin as Month Of Performance Art coincides with the traditional May Day riots and the 10th anniversary of Gallery Weekend Berlin. To mark the occasion about fifty galleries are featuring shows that range from traditional to groundbreaking, from safe to cutting edge, and from mediocre to outstanding.

The three exhibitions currently on display at Sprüth Magers are a highlight: Peter Fischli and David Weiss, Reinhard Mucha, and Philip-Lorca diCorcia. This work is not new, but it is timeless and may serve as a reference point when moving on into less reliable territory.

“Ist das Kunst oder kann das weg?” (Is this art or can it be thrown out?) is a phrase that comes up again and again when German non-art-insiders comment on contemporary art. It is the linguistic manifestation of the Schadenfreude and satisfaction felt when cleaning staff chemically remove some fat installed by Joseph Beuys or throw out a Paul Bianca piece, accidents that happen because not all of the cleaners have an advanced degree in art history. This trivial phrase suddenly gains philosophical meaning in the context of the Fischli and Weiss installation at Sprüth Magers “Eine Ansammlung von Gegenständen” (A Collection of Objects).

This piece fills the exhibition space on the second floor; visitors can look in through an opening in the wall. At the opening there was a line all the way down the staircase. The everyday objects gathered here are not the real thing—they are meticulously handcrafted and painted polyurethane models of items from the artists’ studio. Palettes, cigarette butts, bottles, and tools are all realistically recreated down to the dust, dirt, and paint stains. This is not just tweaky obsession with realistic sculpture. In a time when the artist may remain uninvolved in the actual creation of the work and the concept is more important than either the model or the process of creation, this installation emphasizes craft and taking your models seriously. This could be considered the inversion of the readymade. These “absent” objects have no functionality at all but look so real and useable that it is difficult to wrap your head around it.

More objects can be seen in “Frankfurter Block” by Reinhard Mucha, which occupies most of the ground floor and consists of eight pieces that are part of an ongoing body of work. The show is full of construction material, felt, references to minimal sculpture, and allusions to Beuys. The piece “How a dead hare operates with pictures” consists of upside-down transport trolleys and a blanket with the brand name Hasenkamp (“Hase” being German for hare). The German title “Wie der tote Hase mit den Bildern verkehrt” is very clever: the word “verkehrt” could mean “operate” or “socialize” but it could also mean “reversed”. And the piece immediately brings to mind Joseph Beuys’s “The Pack” where sleds are replaced by trolleys.

The analog mail art project that appears to be ongoing is still relevant and not archaic at all. In 1981 Mucha sent out several hundred coupons clipped from magazines with his name and address and a small portion of the vast amount of junk mail he has been receiving since then is here on display. This inflation of personal data turns on its head the idea of the personalized relationship between customer and the companies providing the coupons. This is Big Data, paper style.

The third exhibition features the series of photographs “Hustler” by Philip-Lorca diCorcia. In the early ‘90s, when the AIDS epidemic was a big topic, diCorcia would find and prepare outdoor locations in Los Angeles for a photo shoot, then proceed to hire a male prostitute on Santa Monica Boulevard. He paid them in full for their services, but requested only that they pose for the photo.

The titles include their first name, age, place of birth, and the price they charged Despite the models being human it does not feel like this exhibition constitutes a break with the gallery’s current focus on objects. There is tension between the set being so perfectly prepared and lit and the models lacking any kind of make up. The scenes are both staged and real at the same time, blurring the line between photojournalism and fiction, mirroring life in a city where movies and reality are difficult to keep apart.

Previous contributions by Johanna Thompson include:

Next post Review: Mike Kelley at the Geffen Contemporary at MOCA Los Angeles