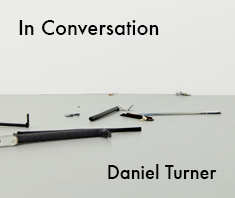 Daniel Turner is a conceptual and installation-inclined artist, originally from Virginia, who has been living and working in New York since 2009. Since then he has embarked on an ongoing body of work that has moved away from the large, sometimes three-dimensional paintings that he had previously experimented with as a student at the San Francisco Art Institute. These days Turner is focused on letting objects be themselves, though he is careful to skew them in odd and provocative ways. With a slew of solo and group exhibitions and features in international art fairs, 2014 has already been a busy year for Turner, whose solo show, “PM,” just closed at team (gallery, inc.) in New York while another, “Daniel Turner,” just recently opened at And Now gallery in Dallas, Texas. Both shows present work that has become signature to Turner’s reserved but bold aesthetic that utilizes and subverts ordinary, industrial, and somewhat stereotypically dull objects and materials. 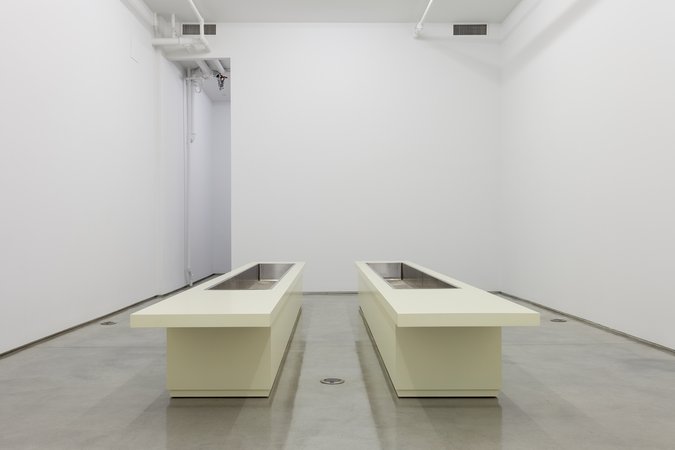 At team, “PM” consists of three pale yellow countertops, two of which are identical and installed side by side, and the third that is a bit smaller and stands perpendicularly to the floor. They simultaneously evoke something clinical, administratively dull, and yet familiarly domestic, for lack of a better word. Inside each counter is a metal basin stained with a strange residue that, as it turns out is from Turner having poured water that he had been collecting from Newton Creek, which was contaminated during Hurricane Sandy, into the sink-like (minus the drains) basins.

Where “PM” is made up of rather large, blandly pale-colored, perfectly executed objects with sharp, straight edges positioned with an acute precision, “Daniel Turner” at And Now conversely leaves the gallery sparse and the installation of a selection of refrigerator handles that Turner has been collecting scattered with an air of happenstance. In the first room a particularly minimal installation is comprised of just three of the metal handles resting atop one another to create a lanky, awkward form lying on the grey floor. In the adjoining room a darker and more desultory installation of pieces and parts that seem as though they just might have made up a whole long ago are placed seemingly at random. Throughout both exhibitions there seems to exist a strange quality that oscillates between a neutral and disconnected zone and an extremely specific and meticulously composed tone.

There has been a fair amount of discussion already about the neutrality that permeates your recent sculpture/installation exhibitions, both at team in New York and also at And Now in Dallas. Is this how you see your imagery? Is there an impulse to produce work that somehow defies any particular sense of extremity? Or are you more focused on the formal elements of your production?

I would prefer if the works remained “neutral,” although I’m aware that’s something that’s not completely possible. Like everyone else I also work within a community and a framework. It’s a mere melding of the two: a fine line between any particular sense of extremity while remaining ambiguous yet formal.

While they may evoke a sort of limbo zone, these installations are also clearly industrial and in “PM” at team, there is also something that seems especially clinical at play. Are there any specific buildings, environments, professions, etc. that were in the back of your mind when planning for these exhibitions?

I think a lot about open fields, the DMV, and the Board of Elections.

I am also curious about the title of the show, do you feel this work somehow relates to nighttime? 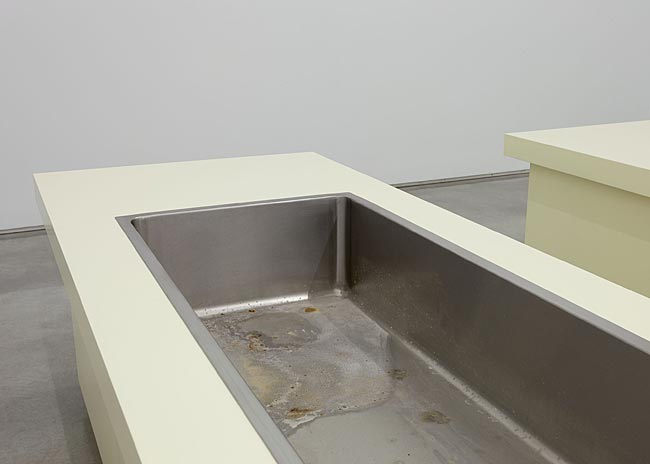 How would you describe the evolution of your work over the past five years or so? Having been aware of your work since 2010 I can say that while there have certainly been nuances and shifts, I can also see a common thread in terms of tone and materiality. Would you agree? And if so, what is it that has drawn you back to these ideas and visual language again and again?

The essence of my work has changed very little over the past decade. However, over time I’ve found more challenging ways to say similar things. I’m fairly one-track minded so I think wanting to communicate a sense of clarity has surely informed my work again and again.

So then, how do you reconcile an attempt on your part to both communicate a sense of clarity and yet still maintain a certain sense of ambiguity? Is the tension between those two agendas in some ways the context for your work?

It is interesting to me that you are based in New York because for some reason your work seems as though the blankness or dullness of something is very un-metropolitan, very simple and sort of flat. Do you feel that having lived in New York for quite a while now has had any influence on the kind of work that you are motivated to make? Do you see these qualities in your work as being somehow reactionary to the business and flashy aspects of life in NYC?

Formally speaking it’s cleaned up my work quit a bit. The city has made me pay more attention to architectural nuances, the way the body navigates an object or an environment.

It’s made me think a great deal about the psychology of space, particularly office or institutional space. This sort of environment was something that I was rather unfamiliar with prior to moving to New York. 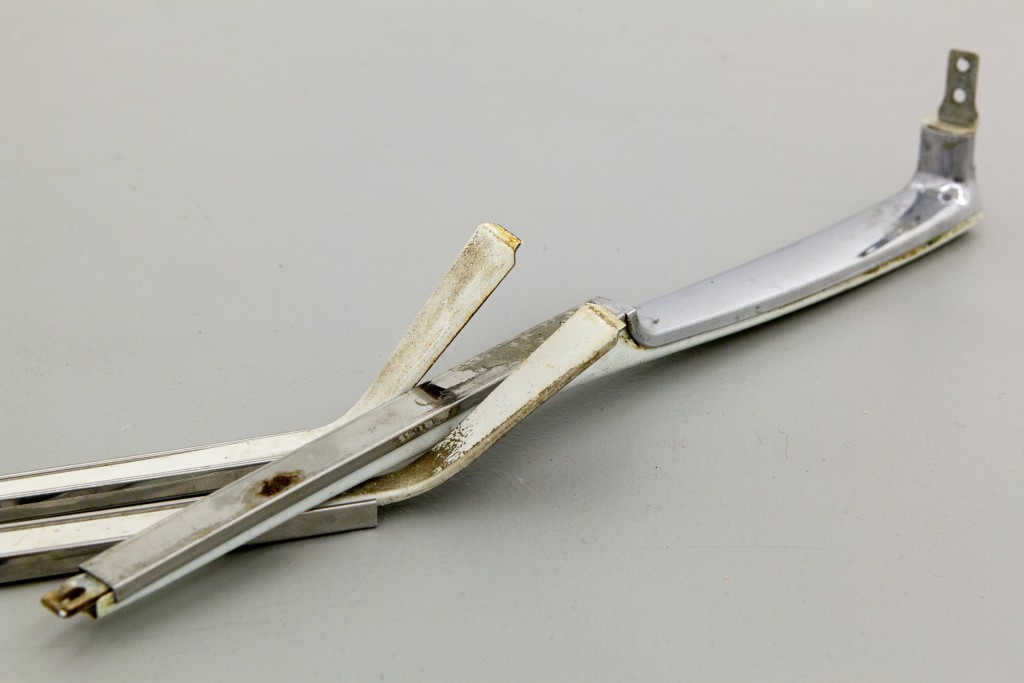 I see, that makes sense. In a lot of ways it is a rather rigid city. Do you feel as though there is a rigid quality to your work, particularly as it is often so minimal and industrial?

Rigid only to a small degree. I find much of my work to operate as a controlled collapse, which I suppose runs parallel with the city.

Yes, New York is certainly an overlapping kind of an environment. I also wanted to ask you about your collaborative projects. I know that at one point your work spread out into collaborations that involved video and performance, though at the moment your practice seems very sculpture and object oriented. Do you still work collaboratively at times? Any plans for upcoming videos, performances, etc.?

Yes I’ve continued to collaborate with Colin Snapp under the name Jules Marquis as it’s been a highly constructive way to critique even my own personal work.

At the moment there are a few exhibitions planned for late 2014 and into 2015 that will exist solely in the realm of performance and video. 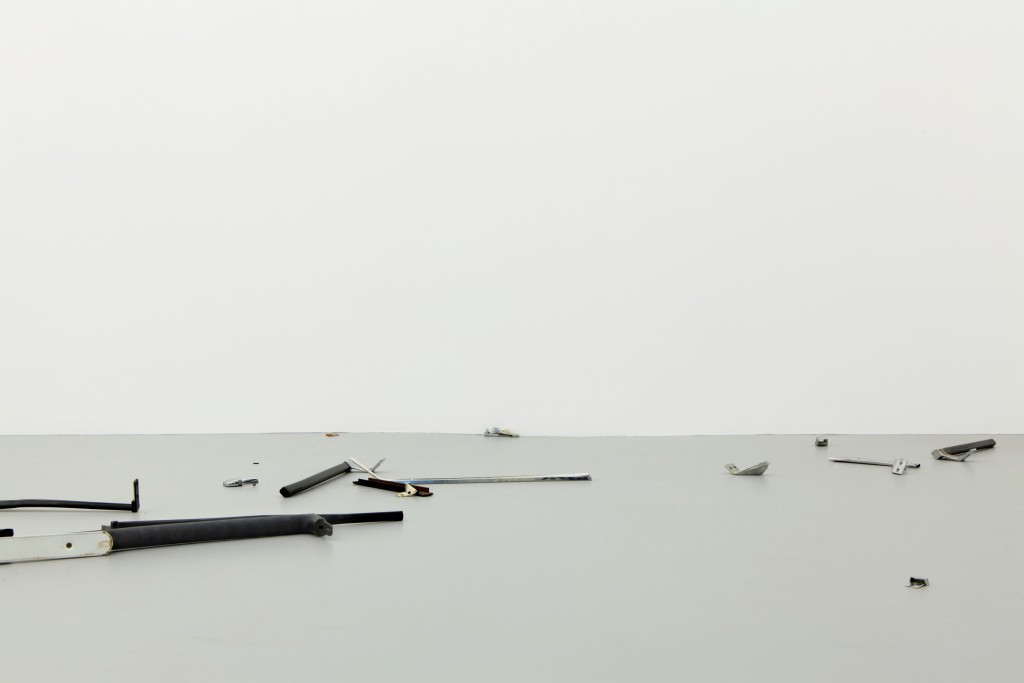 I like the idea that through a different, collaborative approach to art making you are able to see your own individual practice in a perhaps more objective perspective. Do you find that there are certain things that you wan to say or comment on that are better suited to the kind of work that you make as the Jules Marquis duo? And if so, can you say a bit about what kinds of territory it has allowed you to pursue in the past?

Absolutely, the name Jules Marquis alone evades any sense of gender. For example in 2009 I had the idea to take a flight from John F. Kennedy airport to La Guardia airport. So for $493.47 I flew the Director of Jericho Ditch [a non-profit exhibition space in Turner’s native South East Virgina, http://www.jerichoditch.com/] from one airport to the other. The collaborative work has enabled me to realize projects that more than likely I would have failed to realize on my own.

Plane ticket for Jules Marquis from JFK to LGA.